‘Luca’ Delights with the Sounds of an Italian Summer of Fun 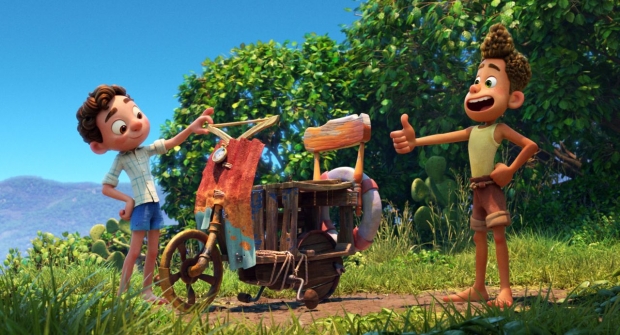 One of the most overlooked components of an animated project is the music. And while many animated films and series make judicious use of original songs, most don’t have the time or budget to devote to more expansive, expertly crafted scores. But that’s never been the case at Pixar. Going back to Randy Newman’s memorable Toy Story music more than 25 years ago, or Michael Giacchino’s fantastic work on Up or Inside Out (to name just two of many) Pixar has paid considerable attention to the power of music, and how important a great score is to telling emotionally compelling stories.

For Disney and Pixar’s Luca, which releases today on Disney+, director Enrico Casarosa turned to composer Dan Romer, an award-winning composer, songwriter, and music producer best known for his work on Oscar-nominated Beasts of the Southern Wild, to bring his tale of summertime on the Italian Riviera to life, conveying the youthful and sometimes troubling innocence of main character Luca’s cascading succession of life-changing events. And Romer’s lively, energetic score provides just the right amount of infectious energy and fun.

“I’ve been a fan of Dan since his work on Beasts of the Southern Wild,” says Casarosa. “I love his style - his accordion skills - and his ability to blend his style with the nuances of Italian music for this score.” He continues, “I just love that his work is a little bit off the beaten path. He’s more of an independent… he’s made scores more for smaller movies. That’s what got me. I wanted to work with him because he was going to bring something a bit different.”

Regarding the film’s range of music, the director explains, “We wanna have fun and be very goofy in one moment, and just punch you in the heart, as we often say here, with another moment. On top of that, we wanted his beautiful style mixed with Italian influences, and he knocked it out of the park. I love the score.”

According to producer Andrea Warren, Luca’s music - Romer’s score and some licensed songs – is key to enhancing the storytelling. “The music is rooted in the emotion of the film,” she says. “It really drives the feeling of this place. We wanted to transport the audience to this seaside escape from the very beginning, and Dan’s score helps us do just that.” In developing Luca, Casarosa was inspired by music from the Italian Golden Age. But according to Romer, the director wasn’t necessarily looking for era-specific music. “Enrico didn’t want a score that felt like it was actually made in 1950s-’60s Italy,” the composer says. “He wanted something that felt like more of a nod, or a memory, than something that felt historically accurate.”

“It was an interesting challenge for Dan, listening to composer Nino Rota’s scores for Fellini’s movies,” Casarosa says. “And what I love is that he brought this kind of romantic, sweeping Italian style, but it feels like a Ben Romer score. I can feel his style there. When the drama needed to come in, it’s amazing, like he’s punching us in the heart. We kept saying to him, ‘You need to punch me here. I want to feel the knife that Luca is twisting into Alberto when he betrays him.’ It’s one of the musical moments that absolutely floored me when I heard it the first time.”

Romer adds, “He told me what he really wanted was a more Italian-sounding version of the style of music I already making, which was very exciting and freeing!”

As animated films are developed, filmmakers use temporary, or “scratch” music, to begin exploring themes, styles, and timing for the film’s songs and score. On Luca, Casarosa started integrating Romer’s work early on. “Working with Dan, what an amazing collaboration,” the director says. “We were really in the thick of it with him, writing and rewriting. Early on, there were a couple of important, key moments where we started using some of his music along with our scratch music, so we knew right away there were important emotional beats where his music felt right.”

Noting that Romer was asked to integrate Italian pop music and opera into his score, the director shares, “The landscape of songs we presented to him was something he had to work around. I knew I wanted opera. I love opera. My mom is an opera aficionado. I grew up with it in my home. And I knew we wanted 1950’s pop, with an Italian vibe. A movie about kids in the summer needs that little radio playing. To me, that's the feeling of summer. We were really digging these awesome old 50’s and 60’s songs.” Romer got playlists of Italian music chosen by Casarosa and some of his Italian friends. “I listened to those playlists on loop for a while to get those harmonies and styles to feel second-nature,” he says. The composer leaned into those Italian sounds – blending them with his signature accordion, as well as mandolin and nylon-string guitar.

Part of Casarosa’s directive to the composer was always keep in mind that Luca is Luca’s story, brought to life through his friendships with Alberto and Giulia. Romer helped reinforce that ideal by creating special themes for each of the three friends as well as for situations. “Enrico and I spent a lot of time bouncing melodies back and forth between us, since we felt the score wanted to be extremely thematic,” he explains. “We wanted the three kids’ themes to each have their own unique sound but feel close enough harmony-wise so that we could switch between them easily in a single piece of music. Since the kids are so interactive and their relationships are so colorful, we wanted to be able to have call and response between their themes in a way that felt seamless.”

Some of the film’s greatest moments are Luca’s dream sequences, made even more emotional by Romer’s score, which he notes, “called for the most lush instrumentation, and usually the most wild rhythms.” He continues, “These were also the moments that call and response between themes worked the best.”

The dream sequences were also the director’s opportunity to imbue the film with some of the storytelling sensibility he used to such great effect in his Oscar-nominated short film, La Luna. “First of all, the dream sequences were one of the ways to bring more of what I do into the movie,” he reveals. “The challenge for me as a director, having made La Luna, is that you can't make a movie that’s all like La Luna. You can only do it in a few spots. Because, if you’re overly lyrical, it doesn't work. It just becomes mushy. So, we had to be judicious to feel contrast. Filmmaking is so much about contrast. We knew that with an introvert like Luca, the dream sequences were our opportunity to see inside his head and show these fantastical, wonderful things. Which I love to do.” As the director, one of Casarosa’s most important tasks was conveying his ideas to the crew in a way that successfully drew them into the film’s emotional core, where they could share, and use their talents to then build from, his vision for the characters and their stories. That dynamic was crucial in his collaboration with Romer, especially in one key dream sequence where Luca races his Vespa high into the sky. “It’s really about the emotion, the currency with how you collaborate with everybody,” the director says. “As a director, you're really asking everybody, ‘I want to feel this here.’ I want to feel the fantastic. Imagine that moment as they soar up to a fish that is the moon. Let it swell and let go. Let's go big here. But then here it’s also bittersweet. My heart is actually aching in this moment.”

“Once we had the dream sequences figured out, we could really start to fine tune them to create the arc of what Luca’s able to imagine as his world expands,” Warren shares. “It was really fun to work with Dan to create that musical connection between all of them. That again is part of Luca’s arc where he first starts imagining, but not very much, and as his worlds get bigger, his imagination gets bigger too. So, it was fun to go back in and figure out how to put music to that feeling of his world expanding.”

As the film’s production progressed, more and more of Romer’s work replaced the scratch track. Part of the challenge for Casarosa was embracing new music after having relied upon temporary music for so long. “We talk a lot about not falling in love with the scratch track,” he says. “It’s a starting point, but we want more. The scratch track is doing the most minimal. Most of the time, Dan’s pieces brought in more, which is what you want.”

“Your ears are so used to the scratch,” he continues. “So, we listen to the new score a few times before giving notes. It's very important. It takes a moment to get used to it because you have a groove in your head with the temp. It's a real danger to fall in love with the scratch. And I was very aware of like, ‘No, we want to top it [the scratch track]. We want to go above it. And it changed quite a bit as we made the film.” As the scratch track gets replaced, changes to scenes can be subtle, or significant. Often, the new music needs adjusting. For Casarosa, “There are moments when the new music is quite different, and other moments where maybe you'll be like, ‘Oh, something’s not right.’ Maybe it’s about the timing. I don't love what the scratch track was doing, but it was hitting at the right time. So often, the new music is all about plussing it. And Dan always brought a lot more emotion to the track, which was great.”

Warren adds, “Once you get the score in, you finally get these beautiful themes that help create continuity throughout the film. You get more emotion when you have a repeated theme that comes into play. Whereas with the scratch, nothing really lines up, because it’s always so specific to just that moment. It doesn't have a cohesive through-line in any way, shape, or form. Once you get that score, not only hitting the right emotion, but having this cohesion, it really makes the film come alive. And that’s what Dan’s great work did for us on this film.”