A Lonely Otter Finds Unusual Companionship in ‘I am a Pebble’

Maxime Le Chapelain, one of six creators of the multi-award-winning 3D/CG student short, discusses the genesis of the project and the collaborative process that brought it to fruition. 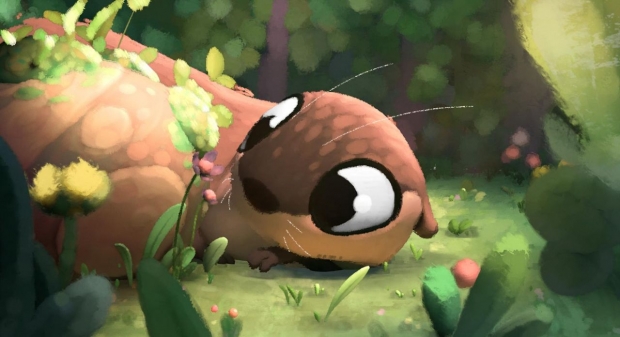 Among the inescapable realities of life on earth are loneliness and, as a sometime counterpart and remediation, wishful thinking. In the beautifully designed and touching dialogueless 3D/CG short I Am a Pebble (Je suis un Caillou), Bubble, an orphaned otter, deals with her solitary existence by creating an imaginary family from the three mossy stones with which she shares her natural habitat.

To find out how so many cooks managed to produce such an exceptional broth, we spoke with co-director Maxime Le Chapelain about the production of I Am a Pebble and what it was like to be part of such a collaborative enterprise.

Take a few minutes to enjoy this charming film and the interview that follows:

AWN: What inspired you to make this particular film? Are there specific themes that are important to you that you wanted to explore?

Maxime Le Chapelain: It all started with the mental image of an otter playing with a pebble that she considers her equal, as well as the rivers in the French countryside, which I really like for their calm and all those mossy stones. Also, at that time, I was thinking a lot about questions of identity and how familiarity and compassion can appear everywhere, even with a pebble. That's what interested me.

AWN: The film has a very painterly, Impressionistic quality, and it strikes a delicate balance between naturalism and stylization. Are there specific styles or artists who influenced you?

MLC: The tone and the story called for a certain innocence and modesty that we found in Alê Abreu's beautiful film Boy and the World and Trevor Jimenez's Weekends – their designs manage to be very expressive with minimal resources. We were also inspired by the painterly, soft style of Gop Gap and Tonko House. For the animation itself, the influences go from The Tale of the Princess Kaguya by Isao Takahata to Glen Keane's Duet, without really seeking to copy the energy of one or the other. MLC: The first thing that came was the nature of the protagonists, the otter and the pebble, and their relationship. Their characters were not really defined, but through discussions with Yasmine Bresson, the story became about family, identity and how an otter and a pebble can be closer than you think. The environment also helped to structure the story, with the seasons conveying the emotional progression of the characters and the film. And the river was a natural setting to show the otters living with other animals like moorhens, hedgehogs, and birds, which helped us to accentuate the family theme, and the solitude of the main character.

AWN: How did you divide and coordinate the work among the six directors?

MLC: From the first day of pre-production, we talked about the needs of the film and our individual preferences, in order to distribute the roles and responsibilities. Some were for the duration of the production and others were successive ones. This specialization required a lot of coordination, a lot of communication all the time. We dealt with problems together as much as possible, as well as being attentive to the needs of whoever came next in the chain. All this made it possible to have consistency throughout the project, at every level, because each shot is the result of the work of the whole team.

AWN: Did everyone have an equal say?

MLC: Yes, from the moment we defined our roles and objectives, everyone could present their point of view or ask a question. Everything was submitted to the whole team and discussed with everyone when we had time, and we took a lot of time for that.

AWN: What techniques were used in the film’s creation?

MLC: The start of production was done in a very classic way, from modeling to lighting, but with a few extras, like the creation of hand-painted and looping textures to help with the final painterly look we were going for. Most of the animation was done on twos or less to create that 2D feeling, and we did most of the special effects by hand in 2D.

Last but not least, for the compositing process we used a script written by Léo Coulombier that sampled each image to apply specific brushes chosen by a few parameters – the luminance of the sampled pixel, color, depth in 3D space, and also some precise adjustments for details like the eyes to make sure they were readable all the time. Each shot required different settings, and solving new or unexpected problems, which sometimes led to rethinking the whole process. AWN: What were the biggest challenges in making the film?

MLC: As you can guess, the compositing process to achieve this brush effect was one of our main challenges, and it was a very exciting part of the project that required a lot of development throughout production. At first, we weren't sure if we could get it the way we wanted, but we had a great team and, with patience, it worked out.

The other challenge was to develop and find the tone of the story. We were trying to convey the main character’s internal conflict, and it was difficult to find a balance between a naturalistic approach, which limits the possibilities of dramatization, and something more expressive that would bring to the screen the internal journey of the otter, but could lose the viewer. We found the solution in slowly building the emotion of the story by gradually revealing more and more of the character's journey, and simplifying the narrative by keeping only the most essential shots in each scene.

AWN: What’s your favorite thing about the film?

MLC: My favorite thing about the film is something that may be kind of esoteric, but it’s how we handled those mossy stones. We always considered them as characters and never doubted their reality. I even wrote a version of the story from the perspective of the little one – named Moss – that I loved. We loved them as characters and we framed them as characters, which is why they're the most interesting protagonists to me, even though – or because – they can't do anything. We can empathize with them and see how their very existence means so much to Bubble.

AWN: What do you hope a viewer will take away from the film?

MLC: I hope that they will find a way of seeing the beauty around them, a desire to take care of nature, and to embrace all that is beautiful and contradictory in the world.