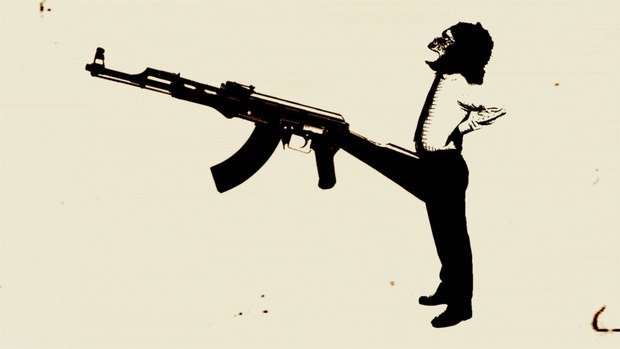 So... early in the OIAF 18 pre-selection process I’m skimming through the submission database and see an endless list of films (26 to be precise) by the same guy. Now, in my... let’s see...it’s 27 years since I started at the OIAF, that’s a sure sign, as harsh as it sounds, of easy rejections. Anytime you get more than maybe two to three films from one person, you can often assume they’re probably not so good.

Fortunately, curatorial decisions are not based on assumptions.

It turns out there wasn’t a dud among this gaggle of submissions that came courtesy of American animator John Morena, who is self-taught and has worked in New York since 2000 doing an assortment of commissioned work including music videos, network promos, commercials and visual effects. Oh, and it also turns out that these 26 submissions were a mere pittance, as he actually made 52 films (yes, one for every week of the year) in 2017. What’s even impressive about Morena’s parade of films is the diversity of tone, technique and subject matter they comprise. Some films (e.g. Untitled, Mini-Jazz, String of Sound and the marvellous Dreams I Don’t Remember) serve up abstract, impressionistic and stream of conscious imagery, while others touch upon prevalent social issues (e.g. Dicks, a hilarious fusion of an old educational film about the function of the penis replaced with images of guns, Slurred, a listing of the -- sadly, seemingly endless slur words used against women, and Flea Circus, which attempts to put our oh-so-serious daily problems into a universal context).

The list of techniques is even more impressive as Morena makes use of flashlights, scanner, string, sound collage, cut out, ink, pencil, photocopies, Polaroids, pixilation...just to name a few of the tools he employs.

“There is literally zero excuse for filmmakers not to make films nowadays.”

Intrigued and mystified, I sought Morena out and asked him what just what motivated this madness. “Fear. Frustration,” he replied. “I originally got into animation so I could make my own films. That was back in 2000. By mid-2016, I had a come-to-Jesus moment that I was getting old and had no films of my own under my belt. I had tried several times to make a film the traditional way but nothing ever truly got off the ground. I had a big time itch to make something.”

Years earlier, Morena, who was getting fed up with the financially necessary but often mindless work of commercial animation, came up with the idea to do a weekly challenge that he called Area 52. “Originally,” he says, “it was to be 52 experimental tests -- one per week for a year -- that I could use as a testing ground to discover new techniques that would then inform my regular client work.”

Although Morena had no set rules in place when he began the experiments, because he was releasing them on Instagram he was forced to keep them under one minute. “It’s one of the main reasons why I chose Instagram as the platform,” adds Morena. “It made it so that I could actually get films done. A maximum of 60 seconds a week seemed more than doable if I was willing to sacrifice. Plus, platforms like Vimeo and YouTube are the filmmaking equivalent to the trading floor of the New York Stock Exchange. Everyone is crowded in the same place shouting for attention.” If there is a one commonality, aside from length, it’s the minimal use of dialogue. “One of my self-imposed limitations,” adds Morena, “was to make films that dissolve language boundaries. I used language and words sparingly, if at all.”

Given the renegade spirit of Area 52, it’s no surprise that Morena eschewed any exterior funding and paid for everything out of his own pocket.  “I made sure to be really Resourceful,” he says. “The most expensive film I made cost me $110. I don’t see a need to spend thousands of dollars on a film that might just end up on Vimeo, be cool for a week, then fade into oblivion.

Incredibly, especially given Annecy’s proclivity towards classical narrative films, the festival took 7 of Morena’s submissions. He later learned that Anima Mundi (Brazil) took 10 and that the Hiroshima festival took a few (Ottawa has yet to announce its selections). “I was surprised that any festival wanted to include them,” Morena admits. “I wouldn’t consider my films 100 percent experimental but they definitely aren’t standard fare and they also aren’t for everyone. As for Annecy, I was stunned. Still am. I mean, Annecy is the crème de la crème.”

With Area 52 in the rearview mirror, Morena admits that while it was “the single greatest achievement of my life,” he wouldn't want to undertake the challenge again. “Now that I’ve discovered that this is the way I want to make films, I can foresee another collection of films being made, similar to the way a band releases an album. But, no, probably not 52 of them.” Morena’s approach reminds me a bit of another American animator, Steven Subotnick. From 1994-2004, Subotnick made four beautiful, highly crafted films. Then one day he decided to change things up, to stop being so fixated on making a good film. The results were astonishing. Since 2011, Subotnick had made 14 films, many of them festival award winners. I wondered if, given this somewhat similar -- albeit compressed -- experience, Morena feels that animators should spent less time on their work and maybe be a bit looser.

“Less time on work is a subjective thing,” he says. “But I do think that any filmmaker, especially young filmmakers, shouldn’t end up like me. You don’t want to stop dead in the middle of your career and wonder what would have happened if you had used to your time differently. I know that’s still my burning fire. I’m 40 now. In 10 years I’ll be 50. Ten years after that, will anyone care about what I have to say? There is literally zero excuse for filmmakers not to make films nowadays. It really makes all the sense in the world not to be so precious about it. It’s a just a movie, and 90 percent of the things filmmakers fuss over are things only they will notice.”