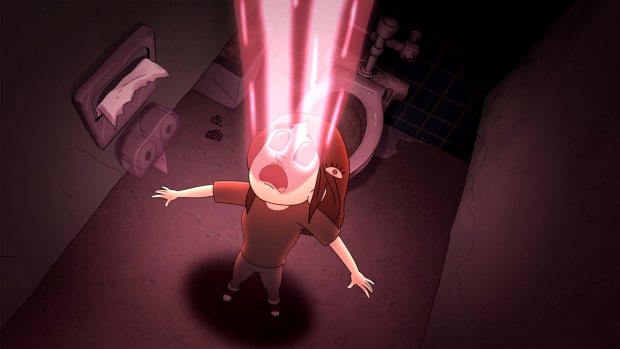 “We wanted to make the mother-daughter relationship accessible, but we also wanted to make people laugh,” says Fowler. “And we really wanted to get across the depth and complexity of a fucked-up family and find the empathy that goes along with three people trying to navigate that.”

Little Demon, premiering yesterday, August 25 on FXX, and today on Hulu, is produced by 20th Television Animation, FX Productions and Jersey Films 2nd Avenue. The show follows 13-year-old Chrissy (Lucy DeVito) who, on top of having just moved to a new town and new middle school while experiencing the start of puberty, discovers that she’s also the Antichrist. As it turns out, Chrissy’s mother Laura (Aubrey Plaza) had a tryst with a man who – unbeknownst to her - turned out to be Satan (Danny DeVito). For her entire life, Chrissy has moved from town to town, with Laura determined Satan would never be able to track down his child.

But, on the day that Chrissy gets her period, explodes two bullies in the school bathroom, and opens a vortex in the sky with her newly discovered powers, the young teen learns about her biological, demon-ruling dad. Against her mother’s wishes, Chrissy agrees to meet with him. Now, Satan is back in Laura’s life, yearning for his daughter's soul. Meanwhile, Chrissy’s just trying to make it through middle school in one piece. “One of the main messages we really want to get across is these are real people going through real things, even though these are heightened situations,” says Kirschner.

Valla adds, “A lot of our approach is to explore the characters fully and honestly and show the full messiness of those dynamics. Laura's character is someone who was on the run for the last 13 years and now she is settled down in one place for the first time and forced to take a long, deep look at herself in the mirror. It’s also true for Satan, who has viewed himself in one way and now, he’s the father of a young girl and has to understand what that means in terms of his greater plans. And Chrissy’s found this whole new side of herself and feels betrayed by her mom while also going through puberty where it feels like her body is betraying itself, too.”

And despite the other-worldly details, having her first visitation with dad in the metaphysical realm ending in an all-out brawl between her potion-brewing Wiccan mother and hellfire-powered father while Chrissy makes a frustrated dash for a party, isn’t too far removed from the familial battles many teens experience in their life. According to Fowler, this is the gift of horror - having the ability to make already relatable themes even more potent.

“The world is so terrifying, and there are so many horrors everywhere, especially when you’re 13,” notes Fowler. “And this is the best age to tell a story like this. Puberty is horror. A mother-daughter relationship at that time is horrifying.”

Kirschner adds, “Junior High is hell on Earth. Once we landed on that, it felt very natural, because it's such a rich territory, thematically, to keep exploring and digging.” The idea for Little Demon was birthed out of Fowler, Kirschner, and Valla’s affinity for horror. While the three friends - also writers and producers with Plaza on Nightmare Time - are primarily live-action actors and writers, they said they’d always wanted to do a story that would, in Fowler’s words, “subvert the Rosemary's Baby trope with a strong woman at the center.”

“First, we had this idea of this woman with a cursed womb, but then the story evolved,” Fowler continues. “Suddenly, this woman has a baby girl who is the Antichrist and we kept aging her up until she was 13.”

Valla shares, “And then we had this idea of the custody battle and this girl being caught in the middle. She’s literally in Middletown, Delaware, in middle school, and right in the middle of this custody battle, and just at the center of the madness of her life. It’s a great metaphor for the insanity that is our current world.”

Fowler, Valla, and Kirschner are affectionately referred to as “The Demons” among production team members, but are self-declared “horror nerds,” all attracted to the genre at young ages. Kirschner was definitely the youngest to be wholly drawn to horror.

“I’ve been obsessed with horror since I was eight and watching The Shining, and then The Exorcist when I was 10,” he explains. “There’s a thrill in not knowing what’s coming next and then that thing finally happens, and you can tell people were having fun when they were making it. It’s pure joy to watch and a sign of a good horror story.” Valla was a bit older, having to overcome the side effects of entering the genre at the wrong place and time.

“My mom allowed me to watch the ABC IT mini-series with Tim Curry when I was six,” says Valla. “Of course, she hadn’t seen it and had no idea how visceral that was and how traumatizing it would be. But I was terrified that Pennywise was coming after me for about six years after that. I couldn't even really watch horror movies for a long time, until I finally watched it again when I was 12 and saw the rest of it with that scene when he turns into a giant spider at the end. It's kind of corny and it helped me overcome my fear of horror movies. And then I just became obsessed with them after that moment.”

Feeling safe and secure while experiencing a cinematic experience that’s truly terrifying is one of the reasons Fowler, unexpectedly, fell for the horror niche as well.

“Horror movies, as a kid, terrified me, and when my brother showed me The Texas Chainsaw Massacre, the original, when I was 15, I thought I was going to be terrified,” remembers Fowler. “But I couldn't take my eyes off it. For me, it's a way to confront the horrors of the world while feeling safe. And it’s a way to remind me that I have a moral compass that is intact.”

The trio all believe this is the appeal of horror - and one of the strengths of their show as an adult animation. “There is this form of catharsis going into horror movies, then coming out, and having that collective experience of facing death,” says Valla. “And then you walk out of the theater together, and the world keeps on turning. For all movies, it’s the same way, where you enter into this universe, and you go back outside, and you come out with this new perspective. And I feel like, with a great horror movie, that’s even more amplified.” Of course, Little Demon is unique in that it combines horror with real family drama, heartfelt moments, and sitcom-level comedy.

“Our goal was always to live a little bit in that adult live-action space that we traditionally know, in terms of it having a little bit of that traditional sitcom feel for comedic purposes, but also being able to delve into these really dark horror spaces,” explains Valla. “We wanted to have enough realism where the horror moments could actually play as truly horrifying but keeping enough of the poppier and more cartoonish elements, so the comedy was still landing.”

But perhaps Little Demon’s biggest strength is that it’s a labor of love from three storytellers who aimed at having fun in an animated show where the sky was, in some cases literally, the limit.

“We’ve been told that we have crazy ideas and should try animation,” says Fowler. “Going down that alley has opened up such a world for us. There's so much more you can accomplish. If you explode a head, it will normally take all day to set up the rig. And if you don't get it right that one time, you can't do it again. But we have incredible artists who can draw that.”

Animation has also allowed the creators to infuse powerful, reflective moments into their show, exploring the concept of body dysmorphia through the trope of body horror.

“At the end of the day, Chrissy is a 13-year-old girl going through so much shit and now she's coming into this whole new side of her,” says Kirschner. “Hopefully, that will really resonate with many people, whether you’re going through puberty, or any other transitional part of your life that is really difficult to navigate.”