The Life of a Sibling That Never Was: Siqi Song’s ‘Sister’

An intimate, sober and thoughtful animated short that imagines what a Chinese man’s family life might have been had his mother not been forced to terminate her second pregnancy. 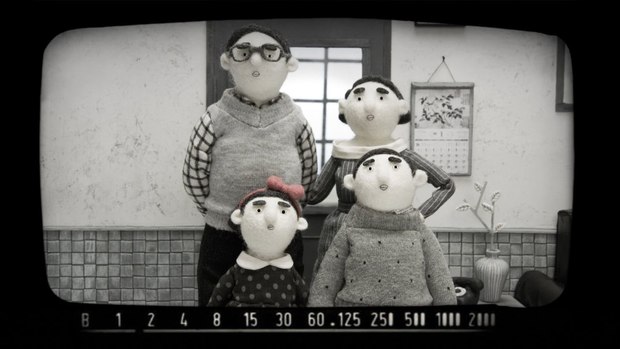 In Chinese animator Siqi Song’s thought-provoking stop-motion animated short, Sister, a man, reflecting on his childhood, soberly contemplates what his life might have looked like in 1990s China had his parents not been forced to terminate their second child’s pregnancy. He dreams of growing up with a younger sister, a life, sadly, he will never know. It’s a compelling film that takes a nuanced, honest and highly personal look at the results of China’s one child policy, a policy that the Chinese government has recently begun to relax.

For Song, who wrote, directed and animated the film, Sister is not a political film, nor a film about abortion, certainly not from the perspective of most Westerners. “I know abortion is definitely a huge topic to talk about, but I don't think that's what my film is about,” she shares. “When I was writing the script, I tried to find a balance, because I know this is a huge consideration here [in the West] and in China especially. But I don’t have an agenda with this film. I’m not making a political point. I made a film that is sincere, from my heart.”

“I made the film because that's how we grew up,” she continues. “While I was in China, when I was a kid, abortion was not a choice for people to make. It was the law. That's the rule. So, it's not as if people, like the parents in the film, wanted to get an abortion or not. It wasn’t an option for them. For me, I wanted to make a film that showed what it was like to grow up in China in that generation; it’s part of that time in history, a memory of our own generation. But it’s really a different look at abortion because during that time, [having a second child] was not really an option for anyone.”

妹妹 / SISTER by Siqi Song from Siqi Song on Vimeo.

She began working on the film, which took three years to complete, while a student at CalArts. The film draws from her own history in the 1990s as a younger sister in a two child Chinese family: there were definite consequences to her parents having a second child. “I had the idea of making this film because for me, I'm the second child in my family,” she explains. “I’m a little sister actually; I have a bigger brother. And growing up, my parents always told me how hard they tried to have me. I was born in the 1990s and it was really strict in China; you could not have a second child. So, my parents tried really hard. And they paid a big price so they could give birth to me. I always knew my story, that I was not supposed to exist.”

“For some families, if they truly wanted to have a second child, they found ways to do it,” she continues. “It's not impossible. Both my parents worked for the government. They knew they would get in lots of trouble when they had me. My father was not be able to advance in his career because he broke the law, because he had me. My parents sacrificed a lot. But very few families had the resources to afford to do it.” Growing up, when her friends in China asked her what it was like to have a sibling, Song would
tell them about her brother; those feelings she shared about her family eventually found their way into her work. “I always wanted to make a film about this issue,” she notes. “When I told people about my brother, they always shared their story with me about their unborn siblings, because there are lots of people in China that were supposed to have a little brother or sister that was never born. These people all grew up alone.”

One Chinese photography student she met told her of how he often wondered what his life would be like if his little sister had been born. His story, integrated with hers, became the foundation for her film.

Though Sister began as a school project, after two years of production, because the size and scope of the story kept growing, it took another full year to complete after Song graduated. “I started with ink paintings,” she describes. “Instead of having pieces of stories, I use Chinese ink paintings to represent each part of the story. When I was a kid, my parents sent me to study Chinese ink painting. I did that my whole childhood. I was trying to find deeper ways to interpret the paintings, and I found I could use this special silk material to recreate the images. I then chose stop-motion as a deeper way to interpret those paintings. And the film just grew much bigger.” All told, she had around 10 people work on the film; Cal Arts volunteers helped with models, sets and puppet fabrication, as well the film’s sound design and music. Song herself did all the animation. “Stop-motion was a really different technique for me,” she says. “I could do a lot of things with the materials, with the camera, with the animation. Much of the filming was really hard work. I mostly worked alone, so I had the freedom of trying different things. If it didn’t work, I tried something else. That was the most enjoyable part. I think the results came out nice, and unusual, because of the different experiments I did while filming.”

For Song, though the production was at times a struggle, her biggest challenge was finding her story. “It’s a narrative film that is very personal,” she concludes. “This film shows my own experiences. I put a lot of thinking into it. I definitely thought a lot about censorship. But that's a really vague line too. You never know what the censorship may be… where the line will be drawn. In China, even in the 1980s and 1990s, there were children’s books, and illustrations, published about this topic. Many feature films and TV shows that talked about the one child policy were approved in China. So, when I wrote the film, I didn’t think censorship would be a huge problem. But, it’s also something I have no control over anyway. So, finding the best story was my main challenge. It was definitely tricky; I think I wrote over a dozen versions of the film.”