The Legendary Charles Schulz Explored in ‘Who Are You, Charlie Brown?’

New Apple TV+ documentary paints a compelling picture of the iconic cartoonist and his beloved characters through animation, film clips, cartoon clippings, family photos, and audio commentary from the artist himself. 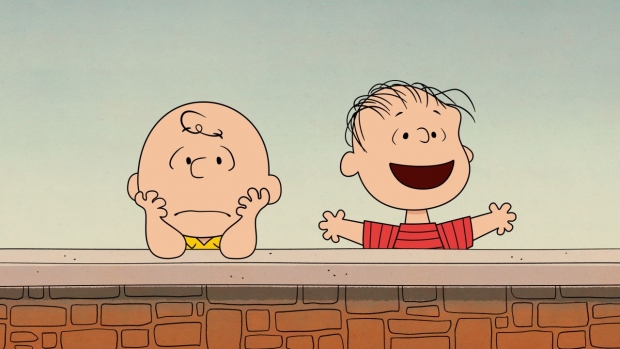 One of the world’s most iconic comic book characters is back, yellow T-shirt and self-doubt in tow, for another sweet and, as always, surprisingly philosophical adventure. Who Are You, Charlie Brown?, produced by Brian Grazer and Ron Howard's Imagine Documentaries and WildBrain Entertainment, is a multi-layered film that follows Peanuts character Charlie Brown as he struggles to write a 500-word essay on who he is while simultaneously documenting the man behind the boy: Charles M. Schulz.

“It gave me a great sense of the people who appreciate him and his work so much that they're willing to make the effort to create something as beautiful as this,” says Jean Schulz, Charles’ widow. “I was delighted when I saw it, and I can't wait to see it again. I've seen it a few times, and I think it's beautiful. I mean, my hat goes off to Michael.”

Directed by Emmy-winning producer, director, and documentary filmmaker Michael Bonfiglio and executive produced by Charles’ friend and fellow cartoonist, Paige Braddock, Who Are You Charlie Brown? is quite the visual scrapbook, including more recent 2D animations of the Peanuts characters mixed with old cartoon clippings, live-action videos, family photos, clips of classic Charlie Brown films, and even some wild and colorful 3D animations of outer space.

“In terms of the animation, a lot of the credit for those visuals, first off, goes to Charles Schulz, but, secondly, to our incredible team at WildBrain,” says Bonfiglio of the award-winning digital media company known for Teletubbies, Caillou, Inspector Gadget, Johnny Test and Arthur. “Marcella Steingart and I wrote the script in conjunction with outlining the documentary, so we knew we had a sense of what written scenes would be going with what documentary material. We designed the whole special to work together, so that while we're learning more about Schulz, we're also learning more about Charlie Brown and the other characters.”

He adds, “It was always the vision to try and tell Schulz’s story through the lens of looking at his creations. So that was our guiding principle, trying to find these moments where his biography dovetails with his creations.”

The hour-long documentary is narrated by Black Panther’s Lupita Nyong’o. Famous fans - including Drew Barrymore, Kevin Smith, and Al Roker - along with fellow cartoonists and friends share how Peanuts characters influenced their lives. Old audio commentary from the legendary creator himself also adds insight into just what these characters meant to him. But the film is not just about the 2D “lovable loser who never seems to catch a break,” and the impact Peanuts had on the world. It shares the very real, very personal life of a young, introverted, and wildly creative boy from Minnesota who dreamed of becoming a cartoonist; his career eventually spanned more than 50 years, beginning with his first published strip in 1947, after having been drafted and serving in World War II, only ending when he lost his battle with colon cancer in 2000. His final original “Peanuts” strip was published the day after his passing.

“I thought the intermingling of the two stories was brilliant,” says Jean. “The best thing I did was keep out of it. I don't know how to tell the story. I mean, I have my own way of telling the story to visitors [at the Charles M. Schulz Museum], depending on who they are, and where they came from. But I don't know how to create television, documentaries, or specials. The professionals did a good job without me.”

But Jean is, of course, a key voice in the documentary as well, sharing memories of her life with Charles and watching him spend decades creating what would come to be regarded as one of the greatest cartoons of all time.

“This documentary serves as a celebration of the 70 years of Peanuts,” explains Braddock. “I've learned a lot about animation working on this project and working on [Rob Boutilier’s] The Snoopy Show because I am a trained illustrator, and my friendship with Schulz came about because he and I were both cartoonists, old school cartoonists, with pen and ink on paper.”

She adds, “Charles' son, Craig Schulz, was also really involved in the beginning stages of this film and I think he really liked the trajectory of the story.” Braddock, who can be seen in the documentary, says Schulz was the reason she wanted to become a cartoonist in the first place. “I tried to emulate him as a kid, you know, his drawings,” she recalls. “I was always drawing Snoopy and loved [Schulz’s] diversity of storytelling and the diversity of the cast of his characters. He had these kids that were rooted in reality but, at the same time, he had this dog that was not in any way confined by being a dog. And to me, as a kid, that was super inspirational and just such an interesting lesson in storytelling.”

Bonfiglio says he also found himself “continuously inspired” by Schulz while working on the documentary, catching a bit of Charlie Brown’s iconic nervousness. “I spent a lot of time worrying we were going to mess it up,” he shares. “To be tasked with not only telling Schulz's story, but to write dialogue for Charlie Brown was just surreal. Having the support and guidance from Paige and from Jean was critical to me not losing my mind in fear of inadequacy. It was just very humbling.”

But the result, much to Bonfiglio’s relief, is a masterpiece, according to Jean, packed with nostalgia in every frame and sequence. The documentary illustrates the evolution of Schulz, as a creator, as well as his famous characters, reaching out to fans who entered the Peanuts’ world in every decade, from 1950-2000 and beyond. The film team also hopes Who Are You Charlie Brown? gives new generations an appreciation for the timid Charlie Brown, bold Lucy, philosophical Linus, musical Schroeder, independent Pig-Pen, and sweet, solemn, and smart Franklin. And, of course, the mischievous, intrepid Snoopy.

“As somebody who grew up with Peanuts, and has always been a fan, it's been a huge part of my life,” says Bonfiglio. “It was a very surreal and special experience to get to work on this and help tell the story.”