‘The Legend of Vox Machina’: A Dream Project Made by Loyal Fans and Long-Time Friends

What began as a livestreamed web series about a group of friends playing ‘D&D,’ has become 24 episodes of an animated adult fantasy-adventure featuring an excitable band of misfits with a fondness for boozing, brawling, and just generally F**king S**t up, desperately trying to pay off their mounting bar tab; highly anticipated show hits Prime Video today, January 28. 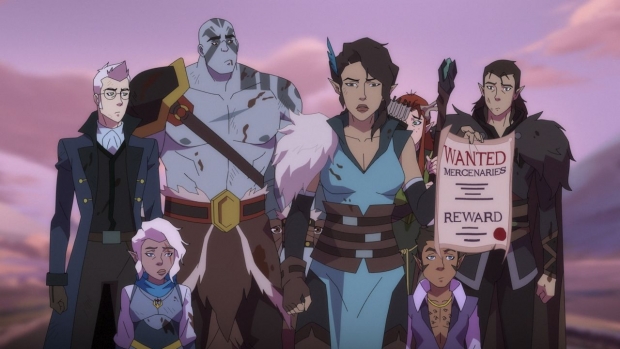 Nearly seven years ago, Critical Role, a web series about a group of voice-acting friends playing “Dungeons & Dragons,” first aired on Twitch and YouTube. Though the members were initially unsure if any audience would be interested in watching someone else’s tabletop roleplay game, all doubts of Critical Role’s success have long been put to rest after two awards, three campaigns and 15 seasons, still running strong.

The Legend of Vox Machina, directed by Niko and the Sword of Light’s Sung Jin Ahn, releases its first three episodes today on Prime Video.

“This whole journey has been so bonkers,” says Johnson. “It's changed all of our lives in the best way.”

“It was a life-altering experience,” concurs O’Brien. “The Vox Machina stories were literally us opening up the wardrobe in the attic and stepping into Narnia. There was no way we weren't going to go back to the start and chronicle that story of our falling in love with the game.” The 2D series – animated by the multiple Emmy Award-winning folks at Titmouse – follows an eclectic crew made up of a half-elf ranger named Vex (Bailey), her twin brother Vax (O’Brien), human gunslinger Percy (Jaffe), a goliath barbarian named Grog (Willingham), a sex-obsessed gnome and bard named Scanlan (Reigel), half-elf druid Keyleth (Ray) and a magical priestly gnome named Pike (Johnson). Known as “Vox Machina” the band of misfits go on various quests to not only save the land of Exandria from dark forces, but also to help pay off their ever-increasing bar tab.

Along the way, they meet some powerful, and interesting characters such as Sylas Briarwood, voiced by Mercer, who lends his voice to other characters in the series as well. In addition to the Critical Role players voicing the main cast – and the same characters from their original campaign – they all also serve as executive producers alongside Star Wars: Resistance’s Brandon Auman.

“It's totally surreal,” says Auman. “I'm a huge Critical Role fan and seeing all the classic moments from the campaign come to life, it's just amazing and so much fun. And watching the team’s faces light up when they're seeing the animation, just how excited they get, they’re like kids. It's been a fantastic process.”

It’s also been a surreal journey for the eight Critical Role stars that began with the hopes of creating a single 22-minute animated episode special. But their 2019 Kickstarter campaign took off like a rocket, eventually becoming one of the most funded Film & Video projects in Kickstarter history. “We were on our heels, no doubt,” says Willingham. “We had a $750,000 goal for the entire 45-day campaign. And that was gone before lunch. None of us were expecting that. We were having ‘Oh, shit’ meetings about, ‘Okay, what do we do next?’” In total, over $11.3 million was raised for the project, which not only allowed the team to expand their one episode special to a 10-episode season, but also caught the attention of Amazon Studios, which picked up the series and ordered an additional 14 episodes, allowing the project to expand its initial run to a second season.

“Still, even in this moment in time, we walk around our houses with our mouths hanging open in awe that it’s all come together the way it has,” says Bailey. “There's no way any of us would have expected that the Kickstarter would have taken off the way that it did, or that the series would have been made the way it has. It’s turned out so beautifully.”

She adds, “Vox Machina was, and is, our heart and the heart of Critical Role. We're so excited to see it in action.”

Ahn says that one of the key notes Vox Machina’s executive producers brought to Titmouse when discussing the design of their adult comedy was that they wanted the show to feel like a “Saturday morning cartoon for the adults, for the fans, and everyone that grew up with that love for animated shows.”

“We knew it was going to be an adult fantasy action show, but also cinematic,” notes Ahn. “Sam, Travis and the Critical Role crew expressed that the heart of their characters and the story is a bunch of goofballs just playing around. And that's what would resonate with the fans.”

He continues, “So if you look at the show, the colors in the world are actually pretty vibrant. And we intentionally chose that even though we know the story can, and will, go to dark places. But overall, we want the tone and identity of the show to still feel fun and not take itself too seriously because being serious was not what Critical Role was ever about.” The Legend of Vox Machina’s animation director Arthur Loftis, known for his work on Trese, worked closely with both Ahn and character designer Phil Bourassa from Young Justice to nail down the exact look of the show. “I had watched a crap ton of Critical Role, so I knew the story and just wanted to get into Matt's head and actually get to play with all the stuff that they had in that world on stream,” says Loftis. “Phil took multiple passes at the main characters, and we looked at different aspects of how the show's been represented before, like the comic book series Critical Role: Vox Machina Origins. We definitely went out of our way to push quality beyond anything that we had expected in the initial development.”

Which is saying a lot, considering that the show has an ensemble cast of seven main characters. “That is a nightmare to tell any animation studio and there were a lot of challenges that came with that for us,” says Mercer. “And part of that was finding an animation style that allowed us to create dynamic, detailed characters that were striking visually, and can animate well, but also not completely destroy the animation studio that was working on it. One of the things that Phil is so good at is creating iconic designs that are streamlined for animation.”

Ray adds, “Phil informed so much of the visual that we wanted to achieve. We wanted it to be colorful, gory and we also all come from a love of anime as well, but wanted to have our unique spin on it.” Ahn and Loftis say that, thanks to the “buckets of money” that came in from the Kickstarter, they and the animation team had the freedom to not worry about going over budget and just focus on being creative and having fun.

“I don’t think the fans knew what that Kickstarter budget was capable of,” says Loftis. “Being in animation and seeing that money come in, and understanding what that kind of budget can provide, there was so much excitement in knowing that we were able to make something incredible that the fans won’t see coming. It’s going to be so much cooler than they probably thought. It’s a dream project in a lot of ways.”

The animation has already taken the Critical Role team by surprise. “I remember, months back now, when we got to get together and watched the entirety of Season 1,” says O’Brien. “And I know how this story goes. I was there. But I was still stupefied staring at the screen watching it unfold. It came out better than anything we ever could have dreamed of.” Everyone on the Vox Machina production hopes that the series appeals to long-time Critical Role fans as well as those who have never seen a single campaign. And maybe even convince those who dislike tabletop gaming to give Critical Role or “D&D” a try.

“Obviously, we had the ‘Critters’ in mind when we wrote every word of this,” says Riegel, referring to Critical Role fans. “But I'm actually most excited to meet new friends and find new people who aren't into fantasy or aren't into roleplay games and have no idea what Critical Role or Vox Machina is. Those are the people I'm most excited to watch fall in love with these characters and watch fall in love with the world of Exandria in the way that we all did when we started playing all those years ago.”

Jaffe is especially excited for viewers to watch the first two episodes as neither contains content that appeared in the original campaign, sharing that “it's going to be this wonderful moment where fans of Critical Role and new people get to come in and everyone gets to be surprised and shocked at the same time for a little while.”

The show has already managed to convert a few members of the production crew.

“We're telling a complex adult story, but with very fun characters who can range from being assholes to heartfelt heroes,” says Ahn. “From a storyteller aspect, that kind of range is so fun to play with and has been life-changing for me. I didn’t even know about Critical Role before, but it’s been great to go on this ultimate path to learn what these characters are about. I’m now a Critter forever.” But Jaffe, Reigel, and everyone else on the team believe that Vox Machina’s early appeal stems from the same roots as those that dictated Critical Role’s success. “Just seeing a bunch of friends be a bunch of dumbasses,” says Johnson.

Ray adds, “So much of what has made Critical Role itself a success, and what I hope the audience feels in this translation to a scripted adapted format, is our relationship as friends. I think there's a certain magic that you can get when you have such a close relationship that we all do. And we really wanted to make sure that was captured in The Legend Vox Machina.”

And despite the show’s immediate and overwhelming support, Mercer says it’s friendship and not fandom that drove The Legend of Vox Machina to existence.

Taking an Old-School VFX Approach in ‘All Quiet on the Western Front’
‘Natural Habitat Shorts’: Like ‘Ranger Rick,’ But for Adults
Framestore Sets Sail on ‘1899’ with New Virtual Production Tools
Animated Characters: The Art of Babbitt – Part 1
Bruce Smith and Ralph Farquhar Talk ‘The Proud Family: Louder and Prouder’ Season 2
VFX is the ‘Thing’ for Tom Turnbull on Tim Burton’s ‘Wednesday’
We Need to Chat
F is for Flake: The (Not So) Great Animation Robbery?
END_OF_DOCUMENT_TOKEN_TO_BE_REPLACED