Leah Shore Masks Up with Peaches for a Pussy Revolution

Watch and learn as an anthropomorphic ‘Furby Pussy’ bounces to a melodic beat while praising the work of Dr. Fauci, Ruth Bader Ginsburg, and Alexandria Ocasio-Cortez. 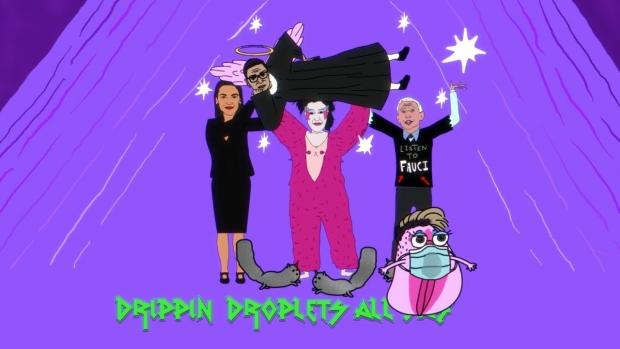 “My pussy wear a mask / My pussy don’t play.” Wondering what to do with all those extra masks lying around? Leah Shore has the answer! The barrier-breaking animation director has released a brand-new 2D music video for Peaches’ Pussy Mask, showing us that these important coverings aren’t just for the face anymore. Shore is no stranger to COVID-19 related masterpieces, but this video may be her (lady) David. Pussy Mask is raunchy, hilarious, and empowering: Peaches and Shore take the ‘P-word’ back!

In the short, an adorable, anthropomorphic pussycat bounces to the melodic beat while praising the work of Dr. Fauci, Ruth Bader Ginsburg, and Alexandria Ocasio-Cortez. Embracing and normalizing the female form while also spreading the message of safe conduct during a pandemic? Genius and educational!

Get ready to groove!

Shore was afforded boundless creative freedom with the visual design; she sights “metal” as her overarching goal. “I'm lucky that Peaches thinks I'm funny and that she likes what I do,” the director tells AWN. “We talked about what I was thinking of illustrating before boarding and she was down from the get-go. Her most interesting visual or something to think about while making it was ‘make it more metal,’ so I tried, but with pink. We both knew that Fauci, AOC, and RBG were going to be in it, but it wasn't until I had them posed like those rockers that Peaches suggested I change up the shirt a bit. I originally had a shirt on him that said, "Listen to Fauci" and had arrows pointed at him like it was a reference to an ‘I'm With Stupid’ shirt. She wanted to make them dance even more ‘metal,’ so what you see is their final ‘metal’ poses, which I adore […]. It was all fair game, from the vagina popping out of Peaches to the Peaches Pac-Man. I was illustrating what came to me in the moment but also because of the tight deadline.”

One of the main challenges of the project was time, pushing Shore and her tiny team (Rob Yulfo and John Harrison) to forge the perfect combination of feminine, badass, and quick.  She explains, “They wanted a quick turnaround, who doesn't? It took about a month from boards to completion of animation. The difficulties were trying to find a balance of interesting shots that were entertaining but wouldn't kill us to animate in a few weeks. That's a hard thing to figure out for sure. Also, how to convey ‘metal’ with so much pink.” Their effort resulted in a truly unapologetic take on the female form and experience. While some viewers may find it shocking, it is refreshing that the imagery is “allowed” to circulate across a wider audience. Shore had the difficult task of juggling empowerment and acceptability, which she achieved with a heaping side helping of hard rock. According to the director, “I really didn't want to show a bare pussy the entire time because I know that that would entirely be censored, so I put a mask on her. She's so cute though, like a little Furby pussy. I also wanted to illustrate an erect vagina because that's what happens when they're aroused, and it was about time to show that and celebrate it. I'd love to make more films like this. Actually, I have a new live-action film that just premiered at SXSW called Puss (no relation), that celebrates women's sexuality in a lot of ways. I guess I have a lot of sex on my mind. I think there needs to be more of a conversation and we should not be embarrassed by it even as pussy owners.”

Looking back on the project, Shore shares that her favorite part was “the trust and freedom I was given. It was a true uncensored appreciation film of the vagina, women's rights, and an amalgamation of everything that's been happening over the past year. That's a lot to unpack in a pussy vid.” Shr adds, “I also really love the shot of the dog in the carriage, the Karen shot, and the Pac-Man shot which came out so well. I hope one day I have more time to create a film for a client. Can you imagine what I could make in two months?!”

This is more than a pussy vid. It is a movement. ¡Vulva la Pussy Revolución!

Framestore Sets Sail on ‘1899’ with New Virtual Production Tools
Animated Characters: The Art of Babbitt – Part 1
Bruce Smith and Ralph Farquhar Talk ‘The Proud Family: Louder and Prouder’ Season 2
VFX is the ‘Thing’ for Tom Turnbull on Tim Burton’s ‘Wednesday’
We Need to Chat
Choc Chip Animation Riffs on Pop Culture in ‘The Art of Murder’
F is for Flake: The (Not So) Great Animation Robbery?
Re-VIEW: ‘Avatar: The Way of Water’ – A Miraculous Vision
END_OF_DOCUMENT_TOKEN_TO_BE_REPLACED