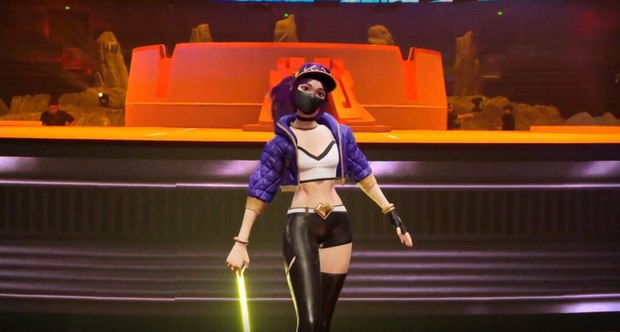 For those who may not know, Riot Games' League of Legends is among the most popular games in the world, drawing some eight million concurrent players daily a decade after its release.

According to the game’s lore, Akali was born into the Kinkou Order, an organization devoted to preserving the sacred balance of Ionia. However, feeling that the order wasn’t really accomplishing anything, she soon left to pursue her own path as a tough-talking rogue assassin skilled in the use of a handheld sickle and throwing dagger. Akali was later introduced as a member of K/DA, a fictional K-pop group comprising in-game champions, which boosted her popularity even more. Obviously, a “live” AR appearance couldn’t be far behind.

In order to realize the project, Cubic Motion took the existing Akali character model and rebuilt the facial rig from the inside out. “Along with look development, rigging proved to be the most difficult challenge in making Akali into a believable real-world character that could be driven by a live performer backstage,” said Persona Product Manager Tony Lacey. He credits the teamwork of the studios – Cubic Motion, the Future Group, Animatrik, and Stype – for the verisimilitude of both her performance, during which she danced and twirled a glowing saber amid real-life dancers before disappearing in a puff of smoke, and her interview afterwards. “Her conversation with the interviewer was fluid and natural, as if the real champion was there in the center of the action greeting thousands of excited fans,” he observed.

Lacey said that Cubic Motion's facial animation expertise was its most significant contribution, but that the team also worked on the dance number and did clean-up of the body work. “It was all done with an eye towards creating the most seamless, lifelike character we could, and to enhance the viewing experience of the die-hard League of Legends audience. With help from Nvidia's RTX series graphics cards, Akali was realized with stunning real-time facial animation and real-time ray tracing, breaking new barriers for augmented reality.”

Apart from the intricacies of facial rigging, Lacey noted that the other major challenge was the complicated logistics involved in the collaboration between China and the UK. Fortunately, Cubic Motion’s past experience with the digital-human project Siren – created alongside 3Lateral, Tencent, and Epic Games, with demos at worldwide events such as GDC and FMX – helped the team navigate the complexities of large-scale communication for this project.

“Our international team of award-winning PhD computer vision scientists have been developing the high-fidelity facial animation technologies that power Persona for more than 15 years,” Lacey said. “Our advanced, proprietary computer vision techniques allow Persona to accurately capture an actor’s performance with stunning detail in order to bring digital characters to life. Designed from the ground up for live performance, Persona enables immediate character animation in real-time engines such as Epic’s Unreal 4.”

Summing up the experience, Lacey concluded, “The League of Legends Pro League activation showcased the talents of Cubic Motion's growing onsite production team, which is taking the technology to new places all across the world while keeping the intricate facial quality that the studio is known for.”

‘The Legend of Vox Machina’: A Dream Project Made by Loyal Fans and Long-Time Friends
A One-Eyed Weasel and a Couple of Possums Walk into a Dino Den…
Method Studios Walks Us Through History for ‘Eternals’ End Credits
‘Dune’: The Inner Workings of Ornithopters, Sand Worms, and Creative Moviemaking
Re-VIEW: ‘Encanto’ - Seeking Beauty in Truth
WetaFX Delivers a Monstrous 3rd Act for ‘Shang-Chi and the Legend of the Ten Rings’
‘The Spine of Night’: Redefining Fantasy and Animated Filmmaking
Plague Diversions: Gazing at the Shortlist for the Best Animated Short Oscar
END_OF_DOCUMENT_TOKEN_TO_BE_REPLACED