A Labor of Love: Disney Artists Work After Hours to Create ‘Weeds’ Short 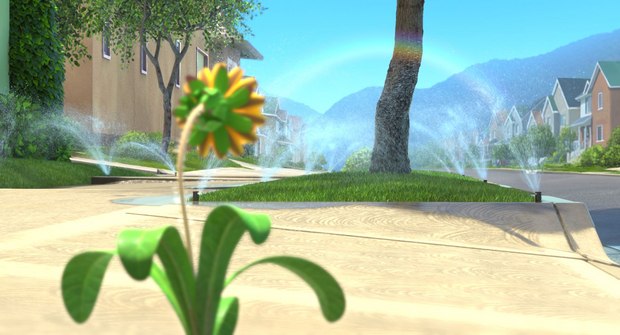 Weeds is the story of a little Dandelion struggling to get from the dry, barren side of a driveway to the other side, where water is plentiful and the grass is greener. After watching neighboring weeds wilt and die, the dandelion faces a decision -- take action or suffer the same fate. Completed over the course of 18 months, Weeds is directed by Walt Disney Animation Studios artist Kevin Hudson, who has worked on some of the studio’s recent biggest hits including Big Hero 6, Zootopia and Moana. The five-minute short, which premiered at Latino Media Fest in Los Angeles and also screened at the inaugural Palm Springs International Animation Festival, was produced by Brad Simonsen. Animation supervisor Hyun Min Lee oversaw a group of nearly 40 other Disney artists, all of whom contributed their work to the project in their spare time.

The story for Weeds came to Hudson during the summer of 2016, when there was so much anger directed towards Syrian refugees and Mexican immigrants. He felt a great desire to say something through his art about the need to have greater empathy for people, who by no fault of their own are stuck in a terrible situation and want nothing more than to have a better life if not for themselves, then for their children.

“First Kevin pitched the movie to Jean-Claude Poulain (our layout artist) and he jumped in and got to work, then we pitched the movie in the layout phase to different departments,” Simonsen recounts. “We found that those who had a connection with the theme came forward and volunteered their personal time, before and after work. It was a bit challenging and unpredictable, but super inspiring to see people give so much of their talents to bring our little flower to life.”

Watch the trailer, and -- for a limited time -- the full film, below, then scroll down to learn more about the making of Weeds in a Q&A with director Kevin Hudson:

How was the story developed?

This project was inspired by the political climate in the summer of 2016. There was a lot of insensitive anti-immigrant anti-refugee talk going on all over the world. One afternoon, while pulling weeds in my front yard, I looked over at my neighbors dry and barren yard and suddenly had this amazing feeling of empathy for the little plants wilting in the sun and realized what they must feel like looking over at my green yard. These Dandelions were just like people, trapped and dying in countries fraught with war or little opportunity, looking at neighboring countries with overflowing excess all the while suffering from lack of the basic necessities of life: food, shelter and water.... That led to the development of the story, which was pitched around to different artists and their thoughts and suggestions implemented until we had a solid script.

What was the process for creating storyboards?

There was very little time to do actual storyboards as Jean-Claude Poulain (aka JCP, a layout artist at Disney in his day job) found some free time to do a basic layout pass for the film, but that required us walking through the film in an evening. I performed Dan, the weed, and JCP shot video with his mobile phone. Prior to this evening, I had built a rough version of Dan and the driveway, and we’d explored what types of shots would work well for telling the story. With the rough cameras, and the performance, we blocked out a rough layout of the film. We edited this abbreviated layout together, put temp music and sound effects on it and we had a really rough version of the intended film. This allowed us to show people what we were thinking the film would look and feel like, and most importantly, what shots we needed animators to help out on.

Who was responsible for look development and how was that achieved? I work mainly as an Asset Artist, so I was able to do most of the Modeling, Texturing, and Look Development. We were always surrounded by amazing artists that were more than willing to offer guidance and artistic advice. Jim Finn contributed a lot of sage Art Director insights, and Adil Moustafabekov, created the beautiful Matte Paintings which reveal the world beyond the one block that was modeled and textured.

Describe the process for character development.

One of the biggest challenges creating the Dandelion Character was that it had to be clearly a plant while also having human traits since it would be a symbolic of an immigrant or refugee. In many ways, it is that classic Animation Challenge, taking something so inhuman, and bringing humanity to it. It couldn’t move like an octopus, and yet it couldn’t be too human either. Producer Brad Simonsen, and Animation Supervisor Hyun-Min Lee insisted that the film be true to the life-cycle of a dandelion so we spent a lot of time researching and understanding how a dandelion grows and reproduces.

Our hero was designed to have leaves that imply arms, a chest, and a backpack in its silhouette helping to create the impression of an immigrant or a refugee. It’s little asymmetrical roots become its unstable legs. Without a human face, all of its facial expression is in the petals on the flower. All of the moments of thought, shock and desperation were completely up to the dandelion’s body language created by the animators. When our hero is doing well, he manages to pull himself together to resemble a human, but when he is panicking and struggling, he devolves back much more into resembling a plant. The challenge was playing in that middle ground not totally human, yet not creepy plant like. And always appealing. We knew if we as artists could make people feel empathy for something as tiny as this little dandelion, then perhaps we could make them feel greater compassion for their fellow human beings. What primary technologies were employed for rigging & modeling?

Maya was the primary tool for doing the modeling, the rigging, and the animation. Houdini was used for all of the water, steam, heat distortion and dust effects.

The compositing was done in Nuke.

The rendering was done in the proprietary Disney rendering package, Hyperion.

How was this pipeline developed/why were these tools selected?

As the film was being made after hours, it made sense to leverage the film as much as possible off the existing pipeline at Walt Disney Animation Studios, which we were fortunate to be able to use. This meant that we could grab an effects artist here, an animator there, and they could hit the ground running when they had spare moments in the evenings or weekends. With the idea that many hands make light work, and the fact that the time everyone had to chip in on a little side passion project meant that every moment was extremely precious.

How was the music for created?

Dale Turner wrote the score for the film. The primary instrument used was a little guitar from Bolivia called a Charango. As the film has themes surrounding immigration and refugees, this little guitar from South America just fit perfectly. It has this wonderful hopeful and slightly sad sound to it. It provides the soul of the main character, and also represents the life of the water.

Hungry for more? Check out the making-of presentation delivered by the filmmakers earlier this month at the Gnomon School of Visual Effects: