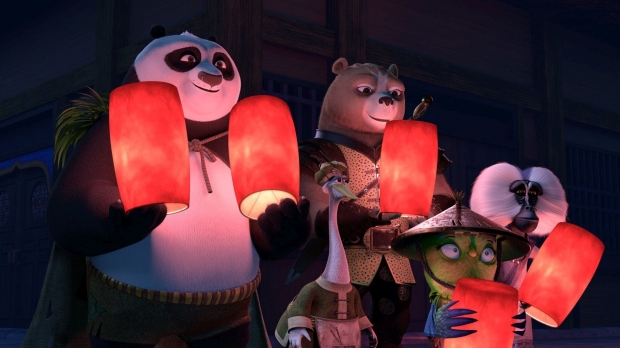 If you had any doubt that we were in the midst of the Lunar New Year, a special episode that caps Season 2 of the hit DreamWorks Animation series, Kung Fu Panda: The Dragon Knight makes it official. In the new “Epic Lunar New Year” episode now streaming on Netflix, everyone’s favorite folivorous martial artist, in order to keep his gang's spirits up as they pursue a global quest for redemption and justice, shares the tale of a hunter who helped protect a village from a dragon on the first Lunar New Year.

Featuring Jack Black in his iconic role, and Rita Ora as the no-nonsense English knight Wandering Blade, the series finds Po venturing outside China for the first time as he and his motley crew of warriors – including the slippery Rukhmini (Rahnuma Panthaky) and the loyal Mr. Ping (James Hong) – face danger at every turn on their journey to unravel the secrets surrounding Blade’s brother and his connection to some magical weapons.

We spoke with writer Felicia Ho, who was brought in to pen the special episode, and co-executive producers/writers Chris Amick and Ben Mekler about its creation and the important role that the Lunar New Year plays in Chinese culture.

Take a look at the “Epic Lunar New Year” trailer, then learn more about the special episode’s production.

Felicia Ho: Lunar New Year is the most important, sacred holiday in Chinese culture. It's a holiday that celebrates the hope for a prosperous future, food, and – above all – family, so it felt natural to give Po the opportunity to explore how he might approach all those things in his unique way. I was inspired through my own experiences of celebrating the holiday growing up Chinese American. It was a time when my parents had the space to share their stories, traditions, and practices with me – practices that don't often come up in day-to-day life. That was a large part of the inspiration for the story: the practice of passing down tradition through storytelling, through sharing the oral history, the significance of why we practice these traditions that mean so much to us.

Chris Amick/Ben Mekler: When Netflix asked for a holiday special within the Dragon Knight universe, it felt important to explore a holiday that Po would celebrate, and there was an opportunity to create a Lunar New Year special to share with a global audience – hopefully one that families can enjoy year after year. There was only one problem: we’d taken Po out of China. That meant we had to get creative about how to celebrate within the globetrotting journey of our series. Luckily, a key theme of the show is experiencing and sharing other cultures, so it felt like an opportunity to let Po and Mr. Ping share their favorite holiday with their new friends. Despite being far from China, celebrating the holiday became a way to connect them to their home as a reminder of what they are fighting for.

The writers’ room was very busy with Season 2 when it came time to write the special, so we knew we’d need to work with someone outside of our staff who could take on an ambitious challenge and run with it. We were lucky to find Felicia Ho. She brought so much to the table right away, and within no time we had the concept of retelling the classic Chinese New Year story through Po’s perspective. That meant everything could be turned up to 11 and filled with tons of action, humor, and heart. FH: I met with the whole team – [executive producer] Peter Hastings, Chris, Ben, and [executive in charge of production] Gregg Goldin – early on to share my experiences and stories about Lunar New Year and to see what might fit with Po's own relationship to the holiday. We did an initial brainstorm in the room, guided by Chris and Ben, and together we came up with three general ideas of what the story could look like. I came back with fleshed-out outlines, and we narrowed down the idea to a singular one that we could begin molding into something more solidified. After additional notes and suggestions, we brought the ideas to the artists who presented the vision of what the art and animation would look like, which was immensely helpful in the creative process. I felt like we were riffing from the first minute. Everyone in the room is hilarious and cracks me up so much. It was one of the most encouraging, hysterical, and welcoming experiences I've ever had.

CA/BM: We loved Felicia’s writing from the start, and on day one, she shared a beautiful and complicated story about her relationship to her family and culture, highlighted by the Lunar New Year. We were so inspired that we built a whole version of the story based entirely on her experience. But as it goes sometimes, things evolved and changed, and this story really wanted to be something else. When that happened, we knew we were in great hands with Felicia because, no matter what story she told, it would always tie back to that personal and emotional relationship to her family and the holiday. AWN: Felicia, how did you integrate the individual character arcs with the narrative?

FH: I always approach every story with the emotional journey of the character. Where are they emotionally at the beginning of the episode and where do they end up? What do they learn? How does this alter their sense of self? Is this specific feeling or journey that they're facing universal to an audience? To me, if you can make the audience feel something real, that's the most important element of the story. Through figuring that out I can start to map out how our characters react to events, obstacles, objectives, tension, other characters. When I can understand that, I can start to weave in the other story elements that make it entertaining, comedic, and cinematic.

AWN: What makes Po such a great character, and how much does it have to do with Jack Black’s interpretation?

FH: Jack Black is iconic. Every character, every frame, everything he's ever done is brilliant. Period. As for Po as a character, I think his resilience, his eternal well of optimism, his ability to laugh at himself, his empathy, how he wears his heart on his sleeve... all these elements are what make him a great, timeless character.

CA/BM: We’ve always approached Po as a character who sees the best in others because someone once saw the best in him. He’s unapologetically himself, and that’s exactly what he brings out in the people around him. Jack Black makes that part easy since he already is that person. Having Jack back to voice Po in our series brings an honesty to the role. The writers know that he can pull off the comedy, as well as the more complicated emotional arcs we follow. The same is true for James Hong as Mr. Ping, who we couldn’t resist bringing along for the second season.

Po and Mr. Ping were clearly defined voices from the jump, but our other actors stepped up to help define their own characters – Rita Ora’s Wandering Blade, Rahnuma Panthaky’s Rukhmini, Ed Weeks’s Colin, Della Saba and Chris Geere’s Veruca and Klaus, Melissa Villaseñor’s Akna. But, even with that strong foundation, this episode had a ton of characters and voices to manage while moving a big, emotional story forward in a way that felt new, but also true to the holiday we’re honoring. Felicia gave the whole team something we were so excited to make. Every show should have a Felicia Ho. AWN: What did you enjoy most about working on this episode?

CA/BM: Producing the Lunar New Year special felt like a real treat. It was exciting to tell a story with a different setting, different rules, that sat outside of our canon, but could still use the characters and themes we’d been spending a lot of time thinking about. As fans, writing for Po and Mr. Ping, for that cast, telling a story in the Kung Fu Panda universe at all – that was exciting. Having the trust and freedom to build new mythology, new characters, push the tone and explore places we’d never seen before… and doing it all alongside phenomenal writers and amazing artists who add so much to each story.

FH: For me, it was the process of watching it all come to life. Sharing a story that's meant so much to me, extracted from experiences over the course of my life, and watching the efforts of a whole team bring that to life. Watching a kernel of an idea build and grow into something that feels like a true collaboration of the most talented animators, writers, directors, executives. That's been the best part of the whole journey.