Kids on Their Own and in Danger - Welcome to ‘Jurassic World: Camp Cretaceous’

For producer Scott Kreamer, Steven Spielberg’s iconic franchise has always been about kids, but in the new Netflix and DreamWorks Animation series, this time, they’re all alone with no adults around to save them. 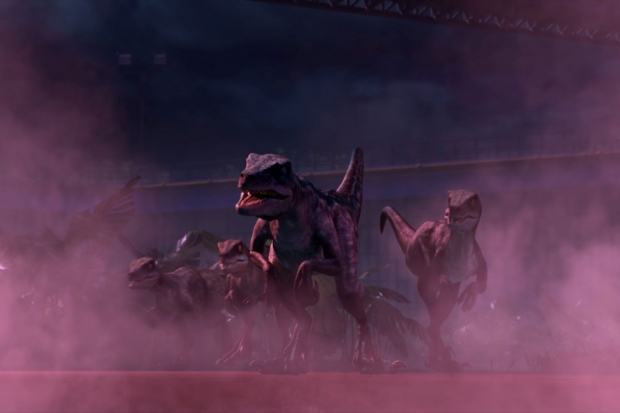 Isla Nublar has more stories to tell and Steven Spielberg is back in the prehistoric saddle, welcoming more young visitors on another big-toothed, big-clawed adventure. But, this time, no adults are coming to the rescue.

Premiering on today on Netflix, Jurassic World: Camp Cretaceous, the new animated series from DreamWorks Animation, is the latest installment in Spielberg’s over-20-year-long Jurassic Park and Jurassic World saga. The eight-episode series takes place at the same time as Universal’s 2015 film, Jurassic World, but on the other side of the island, where a group of six teenagers are testers for a new Jurassic World adventure camp. Like with all great Jurassic Park films, it’s all fun and games until dinosaurs are released and begin to run wild across the island. With failed communication systems and no hope of adult assistance, these six strangers must rely on each other to survive.

While children have always been at the heart of Jurassic Park and Jurassic World films--the entire park being created by character John Hammond to bring children’s wildest imaginations to life--adults have always been the featured stars, always managing to rescue the imperiled kids in the nick of time. Camp Cretaceous takes a different approach, making youth more than just the spirit of Jurassic World; kids are dropped right into the center of the story, where they alone can save themselves.

Though the show is as thrilling and terrifying as ever, one of the producers, Scott Kreamer, hopes that telling the story of Camp Cretaceous through animation--without blood and gore--helps introduce the Jurassic universe to a younger generation of fans. We recently spoke with Kreamer about what it was like to work with Spielberg again after 20 years, the effort that went into keeping this thrilling adventure accurate and fresh, and the fact that this was not the first attempt at making an animated Jurassic Park.

Victoria Davis: So, this is not your first time working on a DreamWorks TV series. You've also worked on the Kung Fu Panda: Legends of Awesomeness and Cleopatra in Space. Is that how you got involved with this project? What attracted you to Camp Cretaceous?

Scott Kreamer: I was actually at Nickelodeon for around 13 years, and I came over to DreamWorks at the beginning of 2018 after finishing Pinky Malinky, to work on Cleopatra in Space with my friend Doug Langdale. The plan was I was going to do that for 2018 and, in 2019, I would be looking for something else. And then about four months in, DreamWorks called me and asked if I'd be interested in taking on this project, Camp Cretaceous. After I picked my jaw up off the floor, I said, “When do we start?”

VD: Getting to work with Steven Spielberg and be a part of this famous Jurassic Park and Jurassic World franchise is almost a once in a lifetime opportunity. But this is actually not the first time you’ve worked with Spielberg?

SK: I had worked with Steven before, 20 years ago, when my career really got going at DreamWorks in the late 90s. I was story editing a show called Toonsylvania, which was DreamWorks’ first animation, executive produced by Steven. I had a couple of very short meetings with him, which I've been excited about and telling people about for 20 years now. When I got onto this show, I asked him if he had told everyone for 20 years that he had two meetings with me. He had not. But it was still pretty exciting, getting to spend time with him again. VD: Other than getting to work with one of Hollywood’s most famous filmmakers, were there others reasons you were drawn to this show? Especially as a seasoned writer and producer in animation.

SK: I've always wanted to tell a serialized story, something that had more adult themes. We tell stories on this show that you don't normally get to tell in kids’ animation, like the fact that not everybody survives, and I was excited to get a chance to do that. And then, of course, you throw on top of that the title of Jurassic Park and Jurassic World, it really doesn’t get any better than that.

We also get to introduce a whole new generation to this world. This is a scary show, but younger kids can watch this with their parents as a family. There are some real issues, there are some real scares, but we don’t show any blood on screen—we do draw the line there—and there’s more humor involved as well.

VD: The events in Camp Cretaceous take place on the other side of the island, but at the same time as the 2015 Jurassic World film. Can you unpack that a little bit?

SK: We start the series at the same time the film starts, when the kids are on the north side of the island and they're going to be the first to try out this amazing adventure camp. So, when the Indominus Rex breaks out, and the island goes crazy, our kids are right in the middle of it.  It was really exciting to pour over the movie and make sense of where our kids could and could not be during the timeline of the film. We also did our best to intersect events either just before or just after they take place in the film, weaving our kids into the narrative without breaking the continuity of Jurassic World. VD: Was it difficult trying to make sure all the events correlated correctly to what would have been going on in the 2015 film?

SK: It was a challenge, but it was fun too. It was like a puzzle to figure out, how to tell this story, this narrative, in a way that makes sense while also giving the thrills and the excitement from the Jurassic franchise. We had maps of the island with different events all over the writers’ room, and we watched the movie over and over again trying to figure out what the paths of escape would be. Anytime you get to watch Jurassic World for work, that’s fun. We also spent a lot of time figuring out what familiar parts of the island we could show and what new parts we could explore that we hadn’t seen in the films before.

VD: All previous Jurassic franchise productions have followed a similar format—everyone goes to this island starry-eyed and in awe of everything, then suddenly the dinosaurs escape and cause chaos and everyone comes to the same conclusion that they should never do this again, yet they always still do. How did you guys keep this storyline fresh for the show?

SK: The idea in most of these films is you have your kid characters who are your side characters who need to be rescued by an adult, whether it's Alan Grant or Ian Malcolm or Owen Grady. Our idea was, let's put kids in the middle of it. Let's make the kids the protagonists and not have adults be able to help them. Let's really empower these kids, who didn't know each other before getting to the island, and have no one to count on but each other, and put them in the center of it. When Zack Stentz pitched the idea to DreamWorks, that was really the central concept, to put the kids front and center of their own story and see what happens. VD: This is not the first time an animation for Jurassic Park has been attempted. There was actually a Jurassic Park animated series back in the 90s that was pitched and eventually scrapped. What made the time right to re-approach that idea?

SK: I have heard about that. Part of it is you have a platform like Netflix now, where you can tell a more adult version of the story. Steven’s marching orders, when he signed off on the concept for the series, was “Just don't do the kiddy version.” So, we really tried not to.

Also, the technology has caught up and you can see there is more detail in these dinosaurs than there would have been back in the 90s. They are animated, obviously, but they look really real. I've been doing this a long time, animation, and I've never seen anything on a television screen that looks like our show. We really tried to lean in and get as close to making it look like a feature as possible. Plus, it’s a nice time to be telling a story about kids from different backgrounds and how none of that matters. In order to get through trying times, they need to stick together.

VD: Was it also exciting getting to animate things like the gyrospheres and the dinosaurs, all original parts of Spielberg’s vision, and bring them to life in a different way?

SK: It was super cool. We were able to get a lot of models for the original set, like the dinosaurs and the gyrospheres, from the feature. And obviously, we had to simplify those to use them in a television pipeline, but to start from that, and continue the story so it feels part of this one universe that we're right in the middle of, it's fantastic and a lot of responsibility. One we take seriously. VD: What do you hope this series does for Jurassic film fans as well as the franchise?

SK: At the end of the day, we want fans to feel like we've done the name Jurassic Park and Jurassic World justice, that we appreciate how strongly many people feel about it. We don't want to mess that up. But we also want to tell this story about these kids sticking together in really dire circumstances. So, hopefully, people like it. I’ve already seen stuff online where people are like, “Oh, it's going to be the kiddy version.” And I can't wait for those folks to see what we've done and blow their minds. That’s the hope and the dream.

Choc Chip Animation Riffs on Pop Culture in ‘The Art of Murder’
F is for Flake: The (Not So) Great Animation Robbery?
Re-VIEW: ‘Avatar: The Way of Water’ – A Miraculous Vision
‘Kung Fu Panda: The Dragon Knight’ Celebrates a Special Lunar New Year
END_OF_DOCUMENT_TOKEN_TO_BE_REPLACED