Kid Cudi’s ‘Entergalactic’ Gets Up Close and Innovative with Love 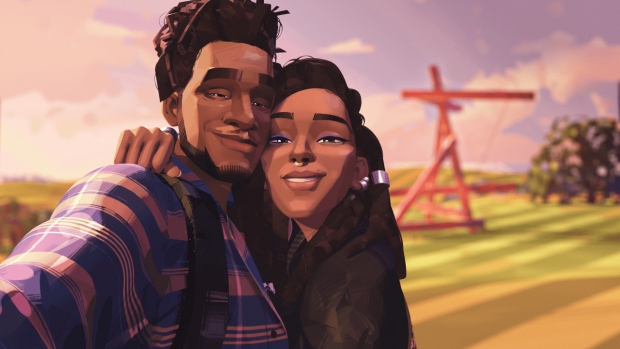 In 2009, rapper and producer Scott Mescudi released his debut album as “Kid Cudi.” The album, Man on the Moon: The End of Day featured the song “Enter Galactic,” with lyrics that narrated a simple love story about Mescudi meeting a girl he liked and the two “doing shrooms for the first time.”

13 years later, Mescudi has taken that simple love song and turned it into an immersive, musical, animated TV event, Entergalactic, which premieres on Netflix today, September 30.

“You have an idea, it's in your mind, and you swear to god it's good and you hope is great, but you never really know,” says Mescudi. “To see it finished is a mix of emotions. There's relief; I feel accomplished and very proud of all the work that everybody's done. It was such a labor of love and there was so much that everybody put into it and I'm so thankful that everybody made the time.”

Produced by DNEG, Khalabo Ink Society, and MAD SOLAR, Entergalactic is a feature-length animation and concept album, split into six chapters, with original music by Mescudi.

The story follows a young New York artist named Jabari (Mescudi) who has just been hired to turn his street art into a comic and, with his new success, moves into his dream apartment. But with success comes challenges, and Jabari soon finds himself fending off character change ideas from his editor as well as sudden advances from an ex-girlfriend. Amid the mayhem, Jabari meets his photographer neighbor Meadow (Jessica Williams) … and his universe is changed. “You take Virgil and his designs, and the legacy that he was able to leave to the world and homage that we're able to give to him, put that together with the animated avatars who all look so beautiful, distinctive, real and disparate, with the music that Cudi created, which I think is so unique, and it becomes a completely immersive experience,” says executive producer Kenya Barris, known for his TV series Black-ish. “I hope it inspires them to want to see more and want to watch it again.”

Production for Entergalactic spanned three years, though an animated concept album is something Mescudi has wanted to do for a long time.

“I need to have something that expands people's minds about the world of animation,” says Mescudi. “The first thing I thought was, ‘If I'm going to do this, this can't look like regular 2D animation. It had to be visually stunning.’ That, coupled with the music, could present something awesome. This is something that had never been done before.”

Mescudi brought on Clash of the Clans: Revenge’s Fletcher Moules to not only direct the TV event, but to also oversee the animation.

“I've worked in animation a long time, and when I heard the concept, I was very surprised that Netflix was going to make something so bold, so different, leaning into music, the tone, the adult nature, and a rom-com,” says Moules. “It made it much easier to build my team, because everyone that we reached out to around the world to work on this had the same feeling that it was something unique and different.” “It's this really immersive, beautiful experience with all these juicy colors,” says Williams. “That’s the best way I can describe it. Like when you eat something tasty, but for my eyeballs.”

For Williams, who was on set for Fantastic Beasts: The Secrets of Dumbledore when Mescudi called her, voicing for Meadow in Entergalactic was a “no-brainer.”

“Meadow was a woman that I could relate to in a lot of ways, and I wanted to be a part of telling this really cool, beautiful, Black love story that has this ability to not only come from [Scott’s] mind, but also be that classic New York City love story,” says Williams. “It has those notes of When Harry Met Sally and You've Got Mail.”

Barris adds, “Sometimes you get caught in the grime and the grit of New York, but in fall or spring, when that sun is coming down over the buildings, and you catch those lights, it is like magic. It doesn't look like anything you've ever seen before. The animators were able to make something that felt cohesive and original and proprietary, and bring light to this city, and show the beauty of New York.” But the biggest challenge on Entergalactic wasn’t how mesmerizing the team could make the animation or even Fletcher’s mission to “blow Spider-Verse out of the water.” The toughest hurdle was creating a love story that was relatable, that everyone could see themselves in while also making the story specific and pointed.

“We wanted it to be authentic,” notes Barris. “We want people to feel like they're eating out of Chinese cartons, sitting on their bikes, in the park, with someone doing some weed in the background. We want you to feel like you know one of these people, if not all of them. We thought the way to do that was to actually make it an ode to what love is like at this age, in this city, with all the things that might inhibit you from having a successful relationship, or that might help you, and make it aspirational.”

One of Entergalactic’s writers and executive producer with Barris, Maurice Williams, drew from his own experiences in love to give the story a more grounded foundation which, to the writer, is just as mind-blowing as the animation’s interstellar aesthetic.

“I think sometimes we can get a little bogged down how revolutionary the idea is when it's actually even more astonishing how beautifully familiar it is,” he says. “On Saturday morning, I'm going to get a lot of calls from a lot of people who I haven't talked to in a while. There are a lot of lifted conversations and lifted emotions. I remember walking into the writers' room being like, ‘The conversation goes like this. I know exactly what she says next. And I know what he says after that.’ And everyone's like, ‘This feels very real.’”

Fletcher adds, “Yeah, he seemed to know too well how these conversations would go. But then, with the visual expression, I would be directing the animators and see these faces come back to me that I remember making myself. I remember making those faces when I was this person or that person.” The facial expressions are one of the sturdiest pillars in Entergalactic’s storytelling. Mescudi’s animation has plenty of over-the-top comic book moments, with even a bit of Kawaii anime tossed in the mix, but in the quiet, close, personal exchanges of dialogue, the team wanted audiences to feel like these were real people. So, getting the emotions just right in every eye shift, half smile, and eyebrow twitch was essential.

“We worked really hard on that,” remembers Barris. “The designers, Scott, and I, we all thought very critically about it, particularly when you're drawing people of color. We did clay models of each of the characters and those models were modified as we started talking about how pain looked, how sadness looked, how embarrassment looked. They were unbelievably detailed.”

Honing in on the faces and dialogue is designed to show viewers the flaws in these characters and, in doing so, make them more human and more reflective of the real people we’ve loved, lost, and loved again.

“I've done a couple of rom-coms, and what I like is playing imperfect women and watching two imperfect people find love,” explains Jessica Williams. “And I like that [Jabari and Meadow] are both passionate about their own separate things. They're both these very full, whole humans separate from each other. That love is an active choice. They do get to this line where they have to decide and choose the other person because there are a million other ways you can go. I feel like it's a really interesting, mature love story in that regard.” Adult animation, as Fletcher explains, “often gets pigeonholed in just being dick and fart jokes.” Though this stigma is being squashed daily as more and more entertainment gravitates toward using animation for mature storytelling, Fletcher believes there’s still a long way to go. But Barris sees Mescudi’s animation as a huge step forward, especially for those in live-action careers that want to break into the realm of animation.

“There is a level of New Age filmmakers and film people who haven't gotten opportunities to do these types of things that, if given opportunities, there's a whole new world out there for them,” says Barris. “This was a swing for a lot of us, myself included, but that’s how you evolve, by giving different people opportunities. I'd love to say that this may be the start of something that continues in a completely new world.”