For the executive producer of Netflix’s hit animated medieval fantasy, great characters are key, but the show’s brutal vampire world wouldn’t be the same without the gore. 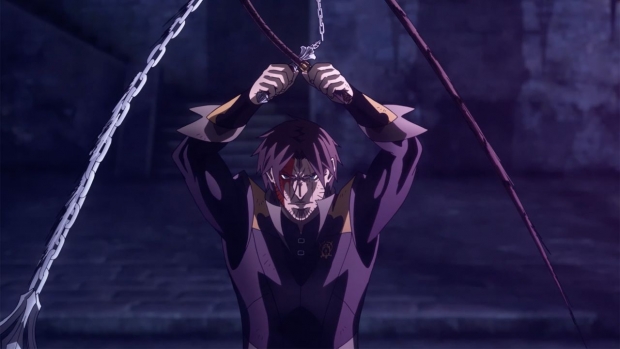 Where there are vampires, there is blood, and Netflix’s Castlevania has both in abundance. The animated medieval fantasy series, based on Konami’s 1986 Japanese video game of the same name, doesn’t hold back when it comes to graphic violence, dark humor, and disturbing storylines. From winged underworld creatures tearing apart human torsos, to eyeballs being whipped out of eye sockets, to humans being burned alive and or used as livestock for vampire diets, it’s writer Warren Ellis’ dark world, and we’re all just living in it. The hit show has been renewed by Netflix for a fourth season, though it may take some time to reach fans; Season 3 premiered almost 18 months after Season 2’s debut.

Another of the key creators behind Castlevania’s guts and gore is the show’s executive producer, Kevin Kolde, whose production company, Project 51, acquired the animation rights to Castlevania back in the early 2000s. Kolde, also a producer on Adventure Time and Bravest Warriors, says the show’s content is “even more mature and brutal” than in the original video game. “In the early episodes, we have scenes where people are just getting torn to pieces by these monsters and there’s even a child on the ground with their guts spilling out. There’s also a scene later on where a monster is carrying a baby in its jaws. In animation shows like Adventure Time, you absolutely cannot do that.”

Castlevania’s violence is unapologetic, as the story follows a young man named Trevor Belmont (Richard Armitage), born and raised to slay vampires and underworld creatures, as he joins forces with a magical Speaker named Sypha (Alejandra Reynoso) and a half-breed vampire called Alucard (James Callis) to defeat Dracula, who has released hordes of evil creatures upon earth to avenge his human wife’s murder. Not surprisingly, there are scenes that may shock viewers, especially as large hordes of demons slash human beings like a shredder ripping through paper.

But, Kolde believes that unnerving, highly detailed, animated violence is what makes the show so different and successful. “With Castlevania, that gore can make the story more real,” he explains. “You don’t want it to be gratuitous, but it’s a brutal world we’re trying to show with realistic people and their children and how they’re impacted by these events. Things like that absolutely needed to be in there.” After spending almost a decade producing more mainstream and humorous shows like Bee and PuppyCat, Kolde acknowledges that Castlevania is a show that’s more to his taste. “It’s the themes, the action, the characters, the monsters, all of it,” he notes. “I’m just as interested in the heroes as I am the villains and that credit goes to Warren, who does a really great job not only setting the overall themes and stories but also illustrating these settings and characters. It’s these characters that I think are a big reason people are responding to the show.”

Kolde and Ellis have been working together on Castlevania since long before Bravest Warriors premiered in 2012. Kolde says they originally planned to develop the property as a direct to video animated film trilogy. But, he says, as direct to video became a “dying breed” in the market place, they had to put the project on hold until years later, when they got their chance to pitch the show as a miniseries to streaming titan Netflix. “They went for it pretty quickly, but I think it was still a difficult decision for them because they were dealing with a lot of animation that was more kid-focused and this was very much adult animation. But we were lucky enough to work with people like Larry Tanz and Sam and Adam Deats at Frederator Studios, who decided this show was still worth doing.”

While Kolde classifies Castlevania as adult animation, with character art inspired by artist Ayami Kojima’s intricate Castlevania game covers from the 80s, and background scenes that “look like paintings,” he says the animation and production team “never treated the show like an animation.” “It’s a strange thing to say, but it’s one of the reasons we didn’t hold back in the show with violence or content,” he adds. “We never said, ‘Oh, we can’t do this because it’s animation.’ We treated it more like an action show and there’s so many dark themes and visuals in an action show, so why wouldn’t we do the same with Castlevania? That’s what gives this show its popularity. There were very few moments where we said, ‘No we can’t do this, it’s too much.’” That action show mindset is highly evident in the series’ Season 3 finale, one of the most successful and, according to Kolde, most challenging installments of the show. The final two episodes of the season not only tackle human slavery, child abuse, and sexual manipulation, but they’re also packed with some of the most intense and highly detailed animated action scenes of the entire series, all taking place at once.

“When we got the script for episode nine, which had a lot of explosive action and delved into sensitive topics we hadn’t seen in the series before, we knew right away that it was going to be a challenge,” Kolde says. “There was a lot of back and forth figuring out how to edit back and forth between four different storylines that were going on simultaneously. It was a lot of trial and error to get that right.”

“In that episode, you can see how our whole team came together,” he continues. “When all the winged creatures fly out of the priory, that wasn’t in the script; that was a decision made by Sam and Adam and it looked great. The same is true with the giant ball of floating humans you see Isaac fighting off; that was not in the script. That was another Sam and Adam contribution to Warren’s vision. It was a weird situation, but I think our animators and storyboarders really loved that challenge.” While Season 3’s final episodes might have been some of the most exciting of the series, Kolde favors episodes with heavy emotional value. “The scene with Alucard in Dracula’s castle, mourning the loss of his mother, killing his father, and the dialogue between Dracula and his son, it’s one of my favorite scenes in the whole series,” he shares. “I love the action, but I also really enjoy those more quiet, emotional moments. Without those scenes enhancing the believability of the characters, the action scenes wouldn’t carry the same impact that they do.”

Though Kolde jokingly says he can’t reveal too much about Castlevania’s upcoming Season 4 “without being killed,” he does say there will be a deep dive into character development and those emotional moments he loves so much. With the three main characters of the show - Trevor, Sypha and Alucard - all being left with broken spirits and a harsh distaste for human nature, the new season will be a turning point for these heroes, and maybe not for the better.