Keep it in Motion - Classic Animation Revisited: 'Tale about the Cat and the Moon'

Every Thursday, Chris Robinson takes a look at films from animation’s past. Today's screening is Pedro Serrazina's Tale about the Cat and the Moon. 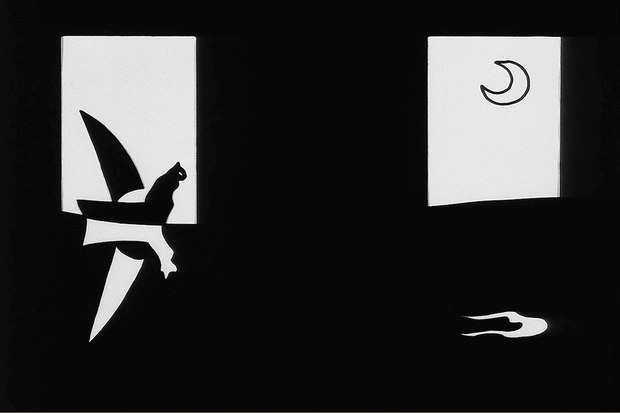 Here’s a golden oldie from Portuguese animator, Pedro Serrazina, made back around 1995. I first saw it at OIAF 96.

Now, I don’t like cats, so one side of me sees the film as an ode to the stupidity of all felines. They are just “slaves to their desires” who fecklessly roam about chasing string and assorted imbecilities… so…naturally a stupid cat thinks it can capture the moon.

But hold up… my older, gentler side (yes, there is one!) shushes that narrow voice of ignorant belligerence and reminds me that I actually don’t mind cats and that the film might very well just be a loving elegy to patience, devotion and the dream of making the impossible possible.

Serrazina’s subdued and sensual animated dance began as a series of postcards that he sent to his friends. Later, he collected them all and turned them into this beautiful work.

The result is a spectacular blend of image, narration and music. The kinetic black and white images swerve and swirl with delicate fluency as the cat hopelessly follows the roads and seas in quest of his unreachable passion.

Cats and moons aside, Serrazina’s film is a simple, beautiful – and timeless - reminder that genuine sustained joy in life arises from the quest not the result…. Or, to quote Byron (which is really an insecure and lazy way of making my own words sound more legit, isn’t it?), “there is pleasure in the pathless woods, there is rapture in the lonely shore.”

It seems we could all learn from those fussy feckless felines.