Keep it in Motion - Classic Animation Revisited: 'The Sweater' 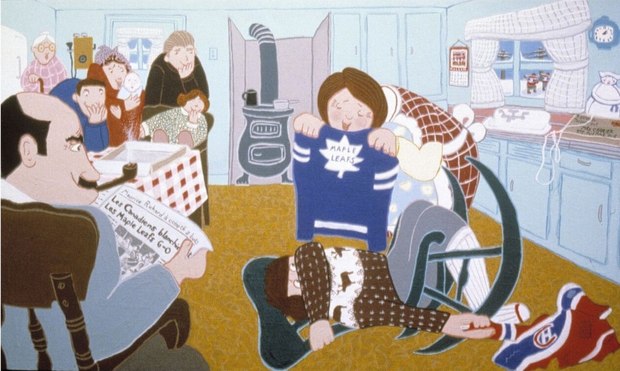 This isn’t really about hockey. It’s about family and love and loss.

Everything about my maternal family side was Toronto.

I was conceived in Toronto (though born in Ottawa).

My aunt, uncles and grandparents were all from the Toronto area.

They weren’t intense hockey fans, but they were definitely Toronto Maple Leafs fans.

As a kid, seeing that the Leafs were perennial losers, I embraced (after a brief love of the Big Bad Boston Bruins of the early 1970s) the red white and blue of the powerful Montreal Canadiens (aka, the Habs).

This led to a long standing rivalry in our family, particularly between me and my Mom’s oldest brother, Bart. When we got together, especially during the years when Montreal was not that great (which, well, has been often since 1993, the last time they won a Championship), Uncle Bart never failed to rub it in. It didn’t matter that the Leafs were worse and hadn’t (and haven’t) won a Championship since just before I was born 51 years ago.  You just couldn't win with him. If Montreal beat Toronto (which was often), it was usually because of terrible officiating, luck, or some unearthly conspiracy.

Uncle Bart, echoing a firm Robinson trait, was not very emotional, at least publicly. Instead, he masked it with a level of dry, sarcastic wit that kept people off balance and somewhat at a distance. That’s what always attracted me to him. He made me laugh, always, whether it was hearing his sardonic soundbites (often directed towards my always genial Aunt Greta) or when he put on his Grumpy Uncle Bart guise around younger kids. He loved to tell the ‘little buggers’ off. Don’t touch the damn train (he loved trains and planes)! Stop making a racket! Stay out of there! Get away from that! During one summer visit, we were all mesmerized by the many rabbits that were coming near his yard. The kids loved the cute bunnies. Grumpy Uncle Bart did not. He suddenly grabbed a hose and started firing away at the ‘pesky buggers’.

There were many tears... from laughter.

This week, the tears are different.

He unexpectedly left this week.

I imagine all the Maple Leafs and Habs players past and present saluting him at centre ice with their sticks.

I imagine all the soaked rabbits fearlessly scampering sadly around his yard awaiting the blast of a hose that will never come.

I imagine all the little kids, the son, the brother, sisters, nephews, nieces and grandkids past and present frantically racing around his house making as much noise as possible in the hopes that he’ll come back and tell them off one more time.

Uncle Bart just had this charm. It was like we were all in a play together. We knew the roles and accepted them. We all saw through his grumpy veil. We knew he loved his family, just as he knew we loved him.

The Sweater, Sheldon Cohen, provided by the National Film Board of Canada