Keep it in Motion - Classic Animation Revisited: 'The Swallow' 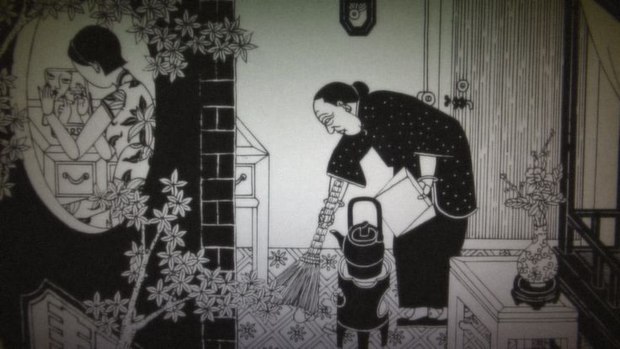 For anyone who has travelled the animation festival circuit of late, you already know that China has been producing an assortment of innovative feature and short films fueled by imaginative designs and experimental concepts. One of those voices is Xi Chen (Grain Coupon, The Winter Solstice, The Poem), whose poetic, romantic visions combine silent film aesthetics with an occasional dash of Igor Kovalyov.

Chen’s 2014 short, The Swallow is a beautiful and modest old school portrait of three generations of Chinese women. The film is set in what might be a room of a larger house or just a small domestic space that the three women share. Without words – and apparently from the perspective of a passing swallow just outside the window - Chen nimbly captures the distances between the generations: the traditional grandmother vs the modern mother vs the abandoned granddaughter.

At times, the combination of black and white, old music, theatre and a jittery image convince you that you’re watching a film made in the 1930s. The unstable, wavy image makes it feel as though you’re watching the film in an impromptu ballroom theatre of a ship

With no words, minimal mise-en-scene (the film never moves from the centre of the main room, even when there is a point where the characters all leave ‘us’ alone in the room. It’s a wonderful moment in the film that creates suspense and bemusement), instead relying entirely on simple character gestures, Chen tells a tale of a troubled family - and with it, shifting attitudes in contemporary China.

The Massive Creative Fellowship Behind ‘The Lord of the Rings: The Rings of Power’
‘The Dragon Prince’ Director Villads Spangsberg Talks Toonlines and Tough Challenges
Laurence Fishburne and Steve Loter Talk ‘Marvel’s Moon Girl and Devil Dinosaur’
Taking an Old-School VFX Approach in ‘All Quiet on the Western Front’
‘Natural Habitat Shorts’: Like ‘Ranger Rick,’ But for Adults
Framestore Sets Sail on ‘1899’ with New Virtual Production Tools
VFX is the ‘Thing’ for Tom Turnbull on Tim Burton’s ‘Wednesday’
We Need to Chat
END_OF_DOCUMENT_TOKEN_TO_BE_REPLACED