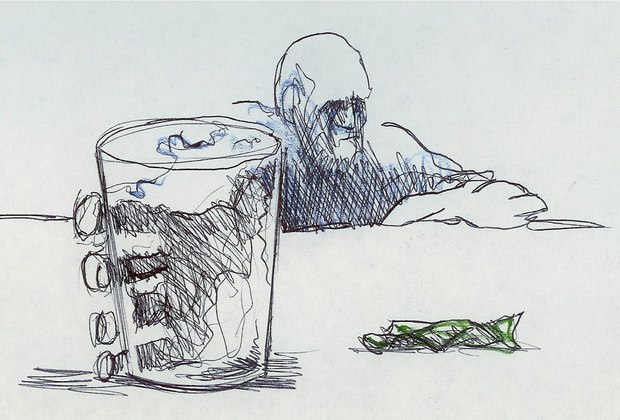 The idea of God has never been a force for good in this world but only for evil. And it's only been born out of weakness and resulted in bloodshed, mayhem, lies, theft.

Like dear ol’ Saint Nick, I’ve never subscribed to religion or churches or any of that organized claptrap.  I’ve found that most of the most vociferous of those who do are also among the most closeminded, intolerant patronizing and unforgiving people. There are some wonderful and well-meaning ideas at the core of many religions, but too many twits twist them into rottenness for their own selfish purposes. Without doubt, religion – or at least those hucksters who peddle their version of it - has done more damage to the world than any terrorist.

Ryan Schiewe’s 2004 student work, Sunday, Corner Tap, seems to understand that. His conversational observational snapshot of a group of odds and sods who find find friendship, solace and community, not in a church, but a pub.

Schiewe, then a student of Chris Sullivan (whose influence is undeniable) at Chicago’s School of the Art Institute, reveals a level of compassion, depth and understanding that is rare for the work of a student.