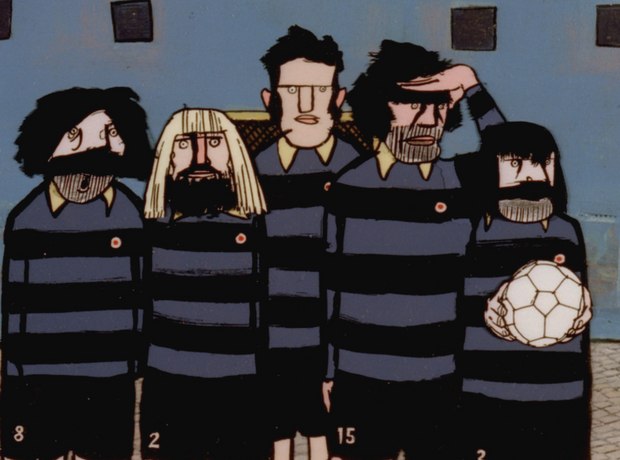 I’m a bit stunned that it’s been 16 years since Jesse Schmal’s student film, Sub! took home the Grand Prize… wait, what? Really? Oh…it was the the Grand Prize Runner-up (it was beat out by the Suzie Templeton’s hilarious, Dog) … I don’t even remember us having that kinda prize. Ah well… okay…well it got the silver at the 2001 Ottawa International Student Animation Festival. Considering that the jury included Phil Mulloy and Koji Yamamura… well... that’s pretty much like getting a Grand Prize somewhere else then, right?

Anyway, Schmal’s student film (sadly, he’s never made another short film…but has done excellent work on shows like Superjail and Code Name: Kids Next Door), made at RISD in 2000, during a particularly vibrant time at the school and when the influence of Estonian animators was seeping through the walls of the school (see also Fran Krause’s wonderful, Mr. Smile).

Visually, I see more of a Jan Lenica, Polish school touch, but the story line, the idea of bringing together multiple, seeming disparate stories into one big absurdist farce has the hallmarks of the Estonian animation studio, Eesti Joonisfilm (that influence has also showed up in designs aspects of Superjail, which was created by another RISD grad from that era, Christy Karacas).

Don’t ask me to explain it. It doesn't matter.  It’s just some good old comic surrealism that takes full advantage of animation’s unique ability to make worlds and people who can say, do and act any fucking way they choose without bowing to the lords of logic.

Sub! from Jesse Schmal on Vimeo.