Every Thursday, Chris Robinson takes a look at films from animation’s past. Today: Shaybu! Shaybu! (The Puck! The Puck), a classic Russian hockey animation from the 1960s 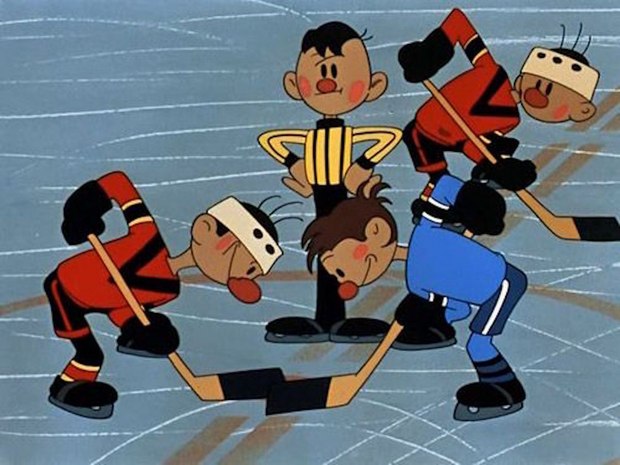 Shaybu! Shaybu!! (The Puck! The Puck!, Boris Dyozhkin, 1964) was introduced to me in the late 1990s by former Hockey Night in Canada broadcaster (and Peter Puck creator), Brian McFarlane. At first I thought we’d found something rare, but about a month after he screened it for me, I saw it playing at the Stuttgart animation festival.

Turns out it was produced the famous Russian studio, Soymultzfilm. Though dripping with Disney influence, the film’s tone and approach to hockey seems more in the vein of Sheldon Cohen’s later hockey masterpiece, The Sweater than to, say, Disney’s hyper-violent portrait, Hockey Homicide.

Shaybu! Shaybu! follows an outdoor game between two teams of youngsters. One boy (blue) dreams of getting his change to play and score the winning goal for his team, while the smug puck hug showboater from the red team just wants to win – for himself.  But that storyline is just a McGuffin used to lure you into what is ultimately a celebration of the joy of hockey, of sport, friendship, community and the beautiful sights and sounds of winter.