Keep it in Motion - Classic Animation Revisited: 'The Sandman'

Every Thursday, Chris Robinson takes a look at films from animation’s past. This week's featured classic is Paul Berry's deliciously haunting, The Sandman (1992). 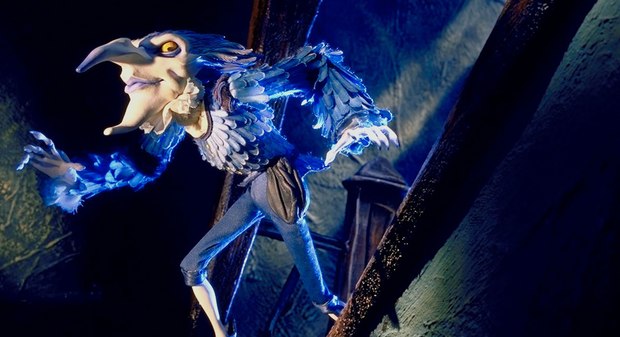 Oh how I remember the cruel, blissful joy I experienced when I first saw Paul Berry’s The Sandman during the pre-selection process of the 1992 Ottawa International Animation Festival. Right from the moment that freaky looking puppet kid is prancing about the main room hitting his god damn toy drum over and over and over again -  as his Victorian-era Mom calmly knits – barely able to contain her desire to drink - well, you know you’re in for a creepshow (this sandman guy ranks right up there with the candy doling child catcher from Chitty Chitty Bang Bang).

And yes… the animation, design, pacing…. it’s all impeccable. Fantastic. It’s Hitchcock, Gorey, Brothers Grimm, and The Exorcist all rolled together.

As the selection committee sat and pondered the film’s merit, I lurked deep in the back corner of the old cinema, slumped in my seat, cleverly plotting to make The Sandman the central feature in my ingenious retrospective, “Films to Scare the Shit out of Kids.” It would be an event that welcomed exasperated parents to attend with their vile, miscreant children. There’d be no more tantrums, no more talking back after this experience. Watching The Sandman would leave them too scared to cry. They wouldn’t even know what hit ‘em until much later… as the quiet mysterious creepiness lingered on their frail little bones day after day after night after night. Yes! I would save suffering parents from their unearned pains.

I met a woman. We made kids. For years, we remained their prisoners, locked away in the cavern of domesticity forced to attend to their every whim and moan.

On those rare occasions of solitude, I’d sneak down to the basement, pop in a VHS of The Sandman, and sit oh so quietly, snickering silent bliss in the darkness as the tears momentarily washed away the pains birthed by those foul homunculus-like fiends.

Taking an Old-School VFX Approach in ‘All Quiet on the Western Front’
‘Natural Habitat Shorts’: Like ‘Ranger Rick,’ But for Adults
Framestore Sets Sail on ‘1899’ with New Virtual Production Tools
Animated Characters: The Art of Babbitt – Part 1
Bruce Smith and Ralph Farquhar Talk ‘The Proud Family: Louder and Prouder’ Season 2
VFX is the ‘Thing’ for Tom Turnbull on Tim Burton’s ‘Wednesday’
We Need to Chat
F is for Flake: The (Not So) Great Animation Robbery?
END_OF_DOCUMENT_TOKEN_TO_BE_REPLACED