Keep it in Motion - Classic Animation Revisited: 'The Runt'

Every Thursday, Chris Robinson takes a look at films from animation’s past. Today's screening is The Runt (2006) by Andreas Hykade. 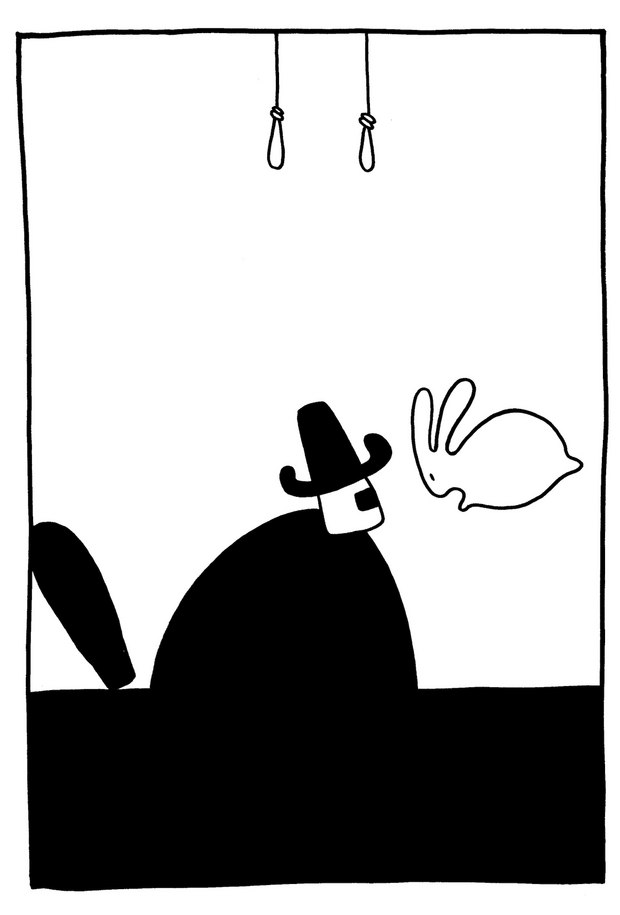 'The Pimp meet The Runt' by Andreas Hykade

Like an old blues/folk song, Andreas Hykade’s The Runt (2006) is deceptively simple. A boy lives on a farm with his uncle and father. They breed and kill rabbits. A rabbit gives birth. The boy wants to keep the runt. The uncle agrees but says that after a year he must kill it. The boy agrees. Time passes. The two ‘runts’ bond but the day finally arrives when they must go the way of their fates. And so it goes.

Of course nothing is really that simple. Rumbling beneath the verses are a variety of themes ranging from loss of: innocence, ritual, and responsibility, and that familiar refrain we will all sing one day: death.

The Runt is the final part of Hykade’s 'country' trilogy which includes We Lived in Grass (1995) and Ring of Fire (2000). The trilogy deals with Hykade’s childhood in the Bavarian countryside. “I remember the country as a dark and vital place,” says Hykade. “It shaped me and inspired me. As my work is about personal experience it was just natural to do these films.”

Hykade had no plans to do a trilogy, but after We Lived in Grass, he felt there still some issues left unsaid about his protagonist’s sexual desires and violent tendencies.  “I did Ring of Fire to try and dig deeper into the sexual aspects. When I saw the two films together I got the impression that something was still missing. So I did The Runt about killing.

There are two magnificent shots in The Runt that elevate the film’s spiritual meaning and provide that link between the personal and collective. Throughout the film, the sun appears as a symbol of life. In one shot, Hykade begins with a shot of the sun but pulls back the camera to reveal that we are actually inside the rabbit. In this simple, beautiful shot, Hykade visualizes the soul and gives life to the rabbit. The second shot comes just before the rabbit is killed. The screen is entirely white until Hykade’s camera again pulls back to reveal that we are actually looking deep inside the rabbit’s eye. Without using a single word, this image screams the runt’s final aching plea for life.

The Runt from Studio FILM BILDER on Vimeo.

Animated Characters: The Art of Babbitt – Part 1
Bruce Smith and Ralph Farquhar Talk ‘The Proud Family: Louder and Prouder’ Season 2
VFX is the ‘Thing’ for Tom Turnbull on Tim Burton’s ‘Wednesday’
We Need to Chat
Choc Chip Animation Riffs on Pop Culture in ‘The Art of Murder’
F is for Flake: The (Not So) Great Animation Robbery?
Re-VIEW: ‘Avatar: The Way of Water’ – A Miraculous Vision
‘Kung Fu Panda: The Dragon Knight’ Celebrates a Special Lunar New Year
END_OF_DOCUMENT_TOKEN_TO_BE_REPLACED