Every Thursday, Chris Robinson takes a look at films from animation’s past. This week he screens Jan Lenica's 1965 classic, Rhinoceros. 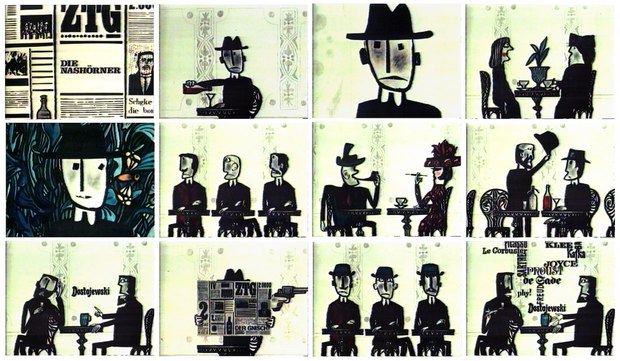 We are always in the process of becoming. Life is a process. To stop is to die. The search for self is at the core of every Lenica film.  His protagonists (think Jan Lenica as performed by Buster Keaton through Beckett and Ionesco and Gilliam) travel through a world of violence, paranoia, anxiety, and absurdity. They do not know how to, nor sure they want to, fit into an increasingly dehumanized society. Lenica’s characters encounter various forms of oppression in the face of paranoia (Rhinoceros), language (A), exile (Labyrinth), humans, and even themselves. Each character is simply trying to define and establish a unique blip on life’s map.

Given the current political climate, Lenica’s work suddenly seems striking fresh again. Rhinoceros (1965), based on the 1959 play by Eugene Ionesco, follows a kind but slacker/drunkard named Berenger. As he drinks in a café – before returning late to his dull office job -Berenger begins to notice that everyone is turning into rhinos. Eventually finding himself alone, Berenger struggles with the emergence of his own passing rhino features has he defiantly struggles to maintain his individuality.

We are indeed living in such an age, one that – because of the omnipresence of social media – has not been experienced before. With everyone racing around liking, being liked, retweeting, sharing etc - we all just want to be liked not matter how hollow or empty these gestures are. And that’s scary and dangerous. That makes us readily acquiescent to manipulation. Remember a few weeks back when the blindfold followers boycotted Uber for picking up airport patrons despite a brief tax protest? Their competitor, Lyft, was also picking up people, but they received no such boycott calls. It’s all fucking chaos right now with people praising and hating and following and liking with no possibility for dissent, for contrary perspectives, let alone rational, calm discussion. This is not a mannerism of the left or right or centre (themselves all bullshit categorizations used to manipulate and compartmentalize voters) – everyone from your gun toting anti-immigrant Trump voter to your middle class Obama missing stroller moms are displaying equal levels of intolerance and ignorance. Everyone wants to talk. No one wants to listen. No one wants to think – at least aloud. If that doesn’t change, we will all soon – if we haven’t already – turn into rhinos.