Keep it in Motion - Classic Animation Revisited: 'A Pack of Gifts Now'

Every Thursday, Chris Robinson takes a look at films from animation’s past.  This week he serves up a classic Christmas dish from Corky Quakenbush 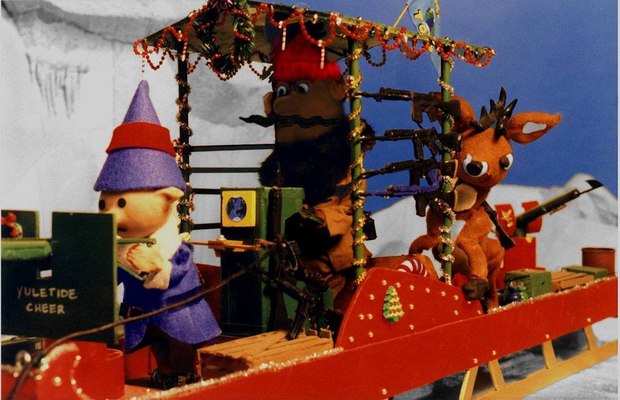 Given the craptacular year that 2016 was for many, I really wanted to find a sweet little Christmas short to share with all of you. It’s not easy to find many Christmas-related indie animation shorts, but I did eventually find one from Estonia. However, the online version is crappy so I bid adieu to sweetness and opted for my other choice, the blisteringly funny Corky Quakenbush parody, A Pack of Gifts Now.

The third in a series of stop-motion Rudolph parodies (see also Ragin’ Rudolph, 1995, and The Reinfather, 1996) made for the Fox sketch comedy series, MADtv, A Pack of Gifts Now is a clever fusion of the gentle classic Rudolph the Red-Nosed Reindeer (1964), the earnestness of Art Clokey’s claymation (Davey and Goliath, Gumby) and the still relevant madness of Francis Ford Coppola’s epic war/horror film, Apocalypse Now (1979).

In Quakenbush’s mashup, (which scored a special mention at the 1999 Sundance Festival), Santa Claus (a.k.a. The Kringle) assumes the role of Colonel Kurtz (Marlon Brando) while our poor ol’ Saskatchewan (not sure if they’re actually in Saskatoon or Regina or hell, maybe Moose Jaw… you know…cause Saskatchewan is a province, not a city.  Either way, not a place you necessarily want to be in the dead of winter) replaces Saigon.

Right… so the toy companies are fed up with Claus giving toys away for free. It’s hurting their bottom line. They want him taken out (and I don’t mean on a date!). They want to make Christmas great again.

I’ve known Corky Quakenbush on and off since about 1996 when Ragin’ Rudolph was selected for the Ottawa International Animation Festival. He kindly shared a few background treats about A Pack of Toys Now:

Patton Oswalt wrote the first draft which, if memory serves right, was a scene of Santa confronting Rudolph. I don't remember how much was fleshed out, I remember it more like a treatment with opening lines and Santa describing his dream. Then Fax Bahr (who, aside from being one of the creators of MADtv, co-directed and co-wrote Hearts of Darkness: A Filmmaker's Apocalypse) and I developed the story and added scenes and dialog. Some of it was written during the voice recording where we riffed. There were scenes that had to be left out due to budget and time constraints. I'm sure Adam Small, Fax's partner, contributed as well. It was a dream come true for me because Apocalypse Now was one of my top ten favorites. I loved being able to pay tribute to it. The only thing that I might have wanted to do differently was that I thought it would add another level of cool to have Hermie in the Willard role, but I was voted down.”

I imagine that the inspired closing lines (a variation of the original from Joseph Conrad’s novella, Heart of Darkness - the basis for Apocalypse Now) that close A Pack of Gifts Now are eerily similar to those uttered by many a parent when they’re roused at 4am on December 25th by some crazed, wide-eyed runts eager to slash the cheap wrapping lazily blanketing the latest plastic they’ll forget in a few weeks.

We should just give each other hugs for Christmas. I think we all need one get over this year and prepare for next one.

Meanwhile…  Merry Christmas - or whatever the hell you call this thing – from all 13 of us here at Keep it in Motion!