Keep it in Motion - Classic Animation Revisited: 'The Night of the Carrots'

Every Thursday, Chris Robinson takes a look at films from animation’s past. This week's screening: Priit Pärn's mysterious The Night of the Carrots 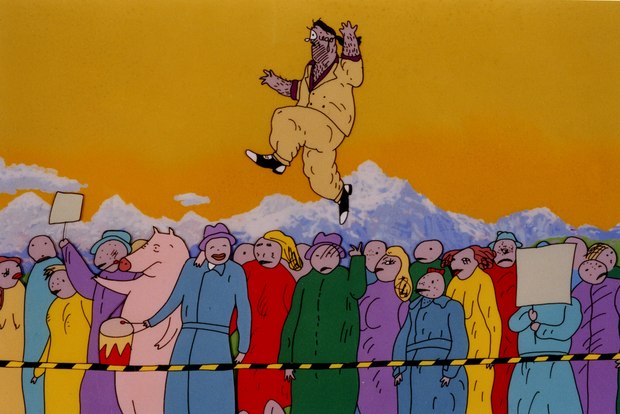 'The Night of the Carrots' by Priit Pärn

Ah, yes, The Night of the Carrots.

You can read the film in many ways. Perhaps it’s a commentary on the facile essence of the cult of celebrity (Diego Maradona, Michael Jackson, Mikhail Gorbachev, Helmut Kohl, and Steffi Graf are among those referenced in the film) or is it a cautionary tale about the false allure of free market economies and the European Union. Estonia had only been independent a few years and there were many debates about whether the country would be best served by joining the E.U or not (they finally did, after much debate, in 2004).

All these interpretations – and there must be others – are valid, but I always see The Night of the Carrots as a likeminded spirit aching for the self-destruction of computers and with it the internet and all the other damn things we have hooked up to us like a fucking I.V. bag.

At the core of The Night of the Carrots is a sanitarium-like place called “PGI.” Crowds of people are aching for their chance to get it. It’s not entirely clear just why they want in though. The narrator suggests that, "being contenders was their real aim because once they were in they would have nothing to do."

In each of PGI's rooms we meet a variety of bizarre characters (including Michael the Zebra, a thin, fragile white creature – hence nothing like a zebra - clearly modelled on Michael Jackson who dreams of marrying a hefty lass) who want only to escape. The occupants each have a personal dream that, they soon discover, they cannot realize because they are literally plugged into their rooms.

There is hope though.

During a random night once a year all the rabbits (who control the world through computers) inexplicably turn into carrots and liberate the occupants of PGI.

Certainly, when read in the context of the Y2K panic, The Night of the Carrots seems to celebrate the possibility of temporary liberation from computer systems. Yet, there is much more here.  Pärn also voices a prescient commentary on the dangers of allowing technology, internet, and social media to saturate our existence. While they lure you in with the promise of instant, virtual interaction and experiences, they ultimately leave you lonely, longing and disconnected…

SCAD Alumni Talk Animation Skills, Careers, and Opportunities
Digital Domain Pushes the Limits of Monstrous VFX in ‘Morbius’
An Interview with Priit Pärn
‘Baymax!’ Provides an Rx for Humor and Compassion
How Digital Domain Brought Photoreal Characters to Life in ‘The Quarry’
Mission Critical: ‘Lightyear’s Journey to Infinity and Beyond
‘The Freak Brothers’: This is Your Humor on Drugs
END_OF_DOCUMENT_TOKEN_TO_BE_REPLACED