Keep it in Motion - Classic Animation Revisited: 'Love and Vehicles' 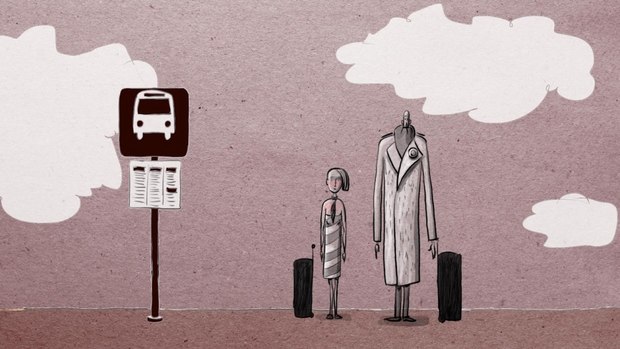 The first time I watched Draško Ivezić’s Love and Vehicles (2013), which is debuting online today for Valentine’s Day – I saw a film that flippantly objectified women (notably on the airplane). When I saw that Priit Pärn was a script supervisor, I thought okay, yep, that explains the airline attendant with long legs, big breasts and low skirt. But, in my haste as a judgmental prick,  (and to be fair, I was watching it in a distracting domestic environment ignoring people seeking my attention and affection) I missed the bigger picture.

The two protagonists, a man and a woman are, separately, walking out of their respective flats and heading on a trip. Meanwhile, around them we encounter an array of people fucking sucking flirting and drooling in row boats, cruise ships, airplanes, trains and bikes (always in the public eye). They are loud, physical, intense... and fleeting.

The protagonists, though, keep walking slowly and steadily towards their destination. They are in no rush to get wherever it is they’re going.

In the end, our heroes reach a bus station. For a moment, their eyes meet. Then, their buses, heading in different directions arrive....

I’ll let you watch the ending... but in short (and, well, it is short), Love and Vehicles is a sly critique of the ME ME ME NOW NOW NOW world we occupy... where something only exists...something is only real... if it’s seen (and liked) .... but in truth, it’s all a smokescreen, all the hot public passion we see on these various vehicles are just quickies, hollow salivating selfies.

Love, Ivezić seems to suggest. is something less sexy and public. Love, like life, is something you work on slowly – like a garden.  Love is not always so beautiful and orgasmic. It’s a labour.

Love and Vehicles isn’t just about romance between two people. It's a call to slow down our lives.... to taste, savour, engage and devouring it. We’re all going to the same place, so what’s the hurry?

Now that’s a message worthier of digesting instead of a box of chocolates..