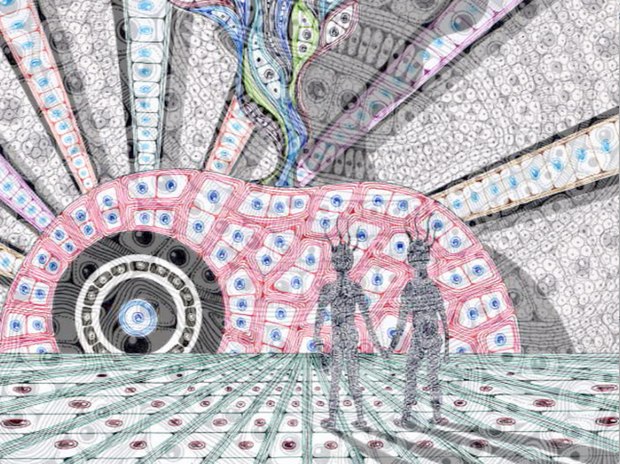 I am swept along a path before I can choose. Initially there are few paths to follow, but soon new roads appear, intersecting, overlapping. A crush of colours.

Creatures and people roam around me beyond naked. No flesh. I feel like I’m seeing the world through a kaleidoscopic microscope, seeing deeper than my eyes often show me. Xrays, showing the essence of our bodies. See through figures. Everything flows in and out of each other, ultimately one.  In this randomness rests chaos and order.

Apple as sin. Everyone eats a part of the apple. We all sin. It’s inescapable.

Mizue nods: “Sin is inescapable even though there are some people who are not conscious about it. Criminal laws are for deeds, but sin is a natural element of oneself. This is one of the invisible elements that I spoke of, I think. There are always discussions about our nature: are we fundamentally good or bad? My answer is neither. Humanity is an incomplete existence.”

Blending in and out each other. The randomness of these connections. Randomness of birth. Being born a miracle really. The odds are so high against your existence.... of EACH existence.

“Right,” Mizue says. “The world is nothing but orders and chaos. Without collapsing. (It’s possible that we are slowly reaching a state collapsing...) I can see them in the history of humanity, in my life, in the cells that a body is consist of.”