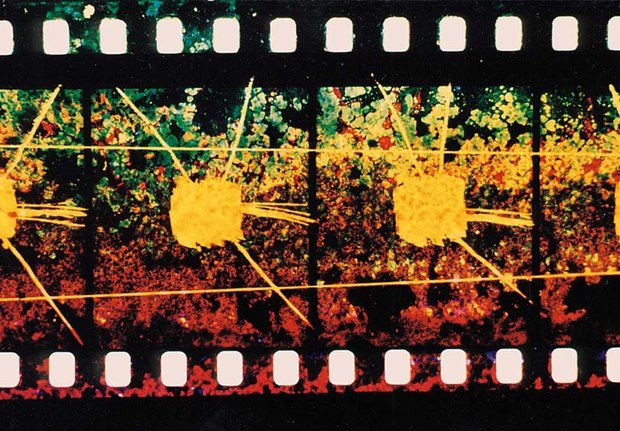 Boy... I havent seen this film in ages. In fact, I haven’t seen or heard from its director, Richard Reeves, in ages either. The West Coast Canadian animator came onto the animation scene in the 1990s. He got his feet wet at Calgary’s Quickdraw Animation Society. It was there that he also discovered the work of one Norman McLaren. After a few short experiments, he hit the bullseye with the masterful, Linear Dreams (1997). Reeves made a few more cameraless films - Sea Song (1999), 1:1 (2001) – that did the festival rounds, but for the most part he’s been quiet the last 8-9 years.

The first time I saw Linear Dreams was in 1998 at the World Animation Celebration in Pasadena. I was on the jury. Now remember, Steven Woloshen wasn't on the animation scene and I don’t recall seeing a hell of a lot of cameraless/scratch works back then. Maybe I’m wrong, but at any rate… there I was being force fed a big ol’ helping of shit shorts and mediocre American TV when Linear Dreams came on and…boy… And it was, like, a great big wonderful slap in the face. The sensory explosion lifted me up in my seat.  It was so distinctly Canadian and personal and yet I also found my own space in the film.

Years ago, I asked Reeves how he conceived the film: “I had a concept, recalled Reeves in 2007, “but the original concept was Alpha and Beta, and this brainwave activity of things and subconscious thinking and it kind of grew from that, and I always figured, “linear”, line and ear, like drawing and hearing and somehow the “e” connected the two and I just kept reminding myself of that. And then, dreams, this whole, where do we even get ideas from?”

I suspect your experience – in this day and age and with this shitty screening format – won’t match my initial one, but try to enjoy it all the same.