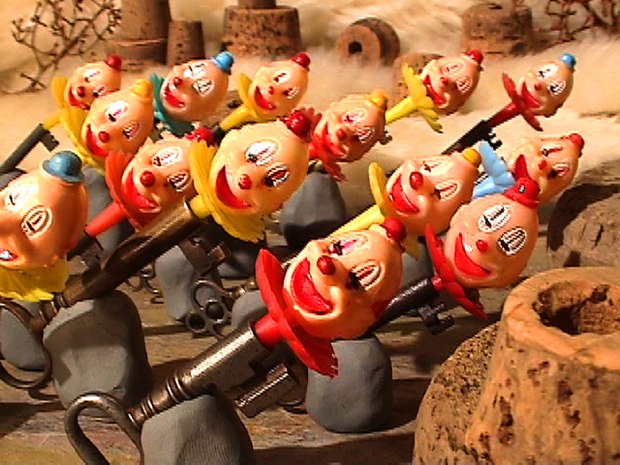 A city is on alert as a bomber plane attacks. From here, PES’s visual magic takes over. We see clown heads on machine guns, popcorn bullets, missile matches, exploding gift-wrap ribbons, peanut bombs and a final annihilation that see the city turn into Christmas tree balls.

KaBoom! is a visual feast that cleverly appropriates images of peace (notably Christmas decorations) for the purposes of war. Is it a subtle comment on religious violence, an anti-Christmas film or just the inspired imaginings of a man who remembers what it is to be a child? Every kid (okay, mostly boy has played war games with their toys. Through their senses, war becomes fun, exciting and even pleasant. KaBoom! is just that; a vision of war through the animated eyes of a child.

KaBoom! had originally been a thirty-second piece called Atomic Nut. It started, he says, as “just another peanut film.” Then he got a call from the clothing company Diesel. They asked him to be part of their Diesel Dreams ad campaign. “What they asked for,” recalls PES, “was this:  a minute-long film, the best idea I could give them, delivered by such and such a date to an office in Amsterdam, with no questions asked.  It was carte blanche, anything I wanted, no one to answer to creatively but myself. This has never happened to me again (as far as commercial work is concerned).”

It got even better. Not only would PES get paid to make the film, but he’d be able to keep ownership rights of the film. PES saw this as a golden opportunity and certainly the biggest commercial break of his career. “Diesel was one of edgiest, best advertisers on the world,” says PES. “Their commercials were legendary. What they were offering me was basically free distribution of the ONE idea I wanted to put out there in the world more than any other.  As long as I came through with one of the standout films of this 30-film collection, I was guaranteed to make a mark in the commercial world.”

PES added 30 seconds to the front of Atomic Nut and renamed it KaBoom! It was an immediate sensation. It went online in August 2004 and received over a million hits.

KaBoom! was the hit of the Diesel films and PES started receiving commercial scripts from around the world. He’d make his mark.

Tags
Short Films
PES
KaBoom!
More From ANIMATIONWorld:
Next Post
I Have a Question Jacques DrouinPrevious Post
‘Birdboy: The Forgotten Children’ Takes Us to the Dark Side and Back
Related Content
Pictures from the Brainbox: A Weekly Dose of Indie Animation - 'Western Spaghetti'
Animators Unearthed - PES
Keep it in Motion - Classic Animation Revisited: 'Chucha'

How Animation Connects ‘Luck’s Voice Actors to Family
How ‘Luck’ Applies a ‘Less is More’ Approach to Comedy
Z is for Zagreb: The Animafest Zagreb Exhbition 1972-2022
Dude! - ‘Rise of the Teenage Mutant Ninja Turtles: The Movie’ Arrives
‘Super Giant Robot Brothers’: A Milestone in Virtual Animation Production
‘Luck’ Aims to Bring Hope to Kids In and Out of Foster Care
Pre, Tech, and Post: The Many ‘Vizings’ of ‘Chip ‘n Dale: Rescue Rangers’
END_OF_DOCUMENT_TOKEN_TO_BE_REPLACED