Every Thursday, Chris Robinson takes a look at films from animation’s past. This week screens the late Run Wrake's mesmerizing, Jukebox 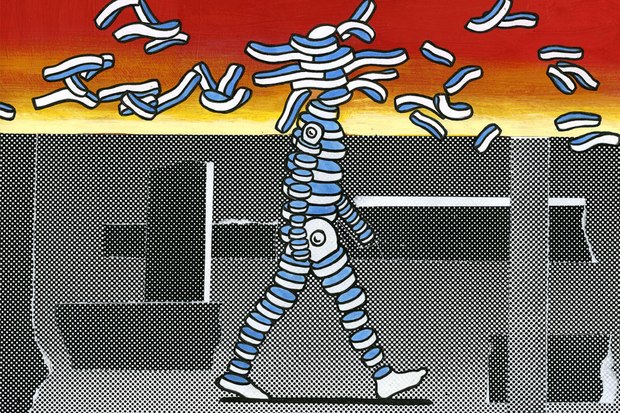 Watching a Run Wrake animation is like tapping into the unconscious mind of some extremely high musical genius. Utilizing bold line drawings, Wrake connects a barrage of imagery from diverse media and loops it with a brilliant sense of rhythm. It’s not surprising that this Royal College of Art graduate (who passed away long before he should have in 2012) found success interpreting inventive musical artists such as Gang of Four, Howie B, Oasis and Future Sound of London. In addition, he made MTV IDs, commercials, illustrative work and visuals for U2’s PopMart and Vertigo tours.

There’s so much to like in Wrake’s filmography (e.g. Rabbit, Music for Babies, The Control Master), but his 1994 work, Jukebox, remains my favourite. When I first saw it in an Ottawa hotel room during selection meetings for the 1996 Ottawa International Animation Festival, well, it just blew my senses open and stood out from everything else (not easy when you’re watching in excess of 1000 films)…or wait…did I see it in Cardiff? Who cares. I saw it. I loved it.

Jukebox is a stream- of- consciousness masterpiece littered with wild beats (including bits of Curtis Mayfield’s Move on Up) and array of looped, drawn and collage imagery that ranges from the surreal to pop culture. Watching Jukebox is a bit like spending the night in a dance club: it’s an upbeat, fractured ride through a world of paranoia, fear and joy.

One of the most striking images from Jukebox is the meathead character — who appears in many of Wrake’s films. “The meathead thing started as the metaphor for the fear of someone being confronted with a dog, but has become more about the fact that we’re all just living meat beneath our labels.”

The initial idea behind Jukebox came from a W. H. Auden poem, “As I came out one evening”. After two years of “blood,sweat and tears,” Wrake got bored with the project and abandoned it in favour of a more off - the- cuff approach.

‘Natural Habitat Shorts’: Like ‘Ranger Rick,’ But for Adults
Framestore Sets Sail on ‘1899’ with New Virtual Production Tools
Animated Characters: The Art of Babbitt – Part 1
Bruce Smith and Ralph Farquhar Talk ‘The Proud Family: Louder and Prouder’ Season 2
VFX is the ‘Thing’ for Tom Turnbull on Tim Burton’s ‘Wednesday’
We Need to Chat
Choc Chip Animation Riffs on Pop Culture in ‘The Art of Murder’
F is for Flake: The (Not So) Great Animation Robbery?
END_OF_DOCUMENT_TOKEN_TO_BE_REPLACED