Keep it in Motion - Classic Animation Revisited: 'It's So Nice to Have a Wolf Around the House' & 'And Then I'll Stop'

Every Wednesday, Chris Robinson takes a look at short animation films. Today: In recognition of his Lifetime Achievement Award from Animafest Zagreb, we screen a Paul Fierlinger double bill. 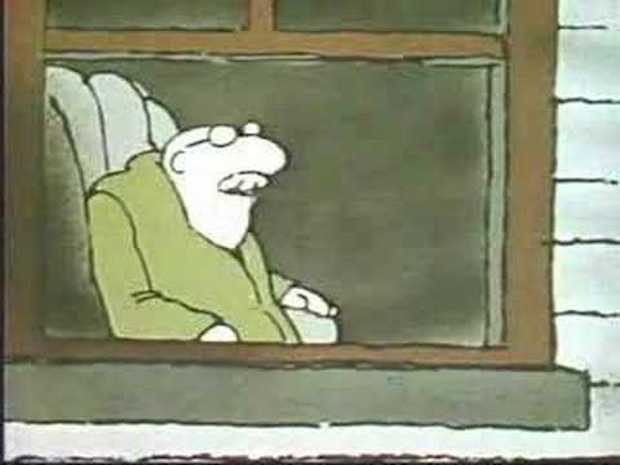 Animafest Zagreb recently announced that they would be giving a Lifetime Achievement Award to Czech/American animator, Paul Fierlinger.

For this column, Paul and, his wife/creative partner, Sandra, very generously offered to put a couple of his early films online for this first time.

Rather than write from scratch, I decided to reprint slightly adjusted excerpts from a 2000 article that I wrote on Fierlinger’s career (later published in the book Unsung Heroes of Animation).

The most intriguing film of Fierlinger’s early years is It’s So Nice To Have a Wolf Around The House. Commissioned by the Learning Corporation of America (LCA), the film was based on a book by the same name.

Voice actor, Jim Thurman, ad-libbed the entire film. “We had no script,” recalls Fierlinger. Thurman just looked at the pictures on every page and said something, so we pretty much made things up as we recorded.”

While Wolf is somewhat dated, it is clearly the first mark of the notable Fierlinger style. The thick black lines, the dark, warm colours, the strong, confident voice of Jim Thurman are evident. In content, Wolf is a tale of everyday folk; soft voices that Fierlinger amplifies throughout his career.

While at the 1988 Ottawa International Animation Festival (OIAF), Fierlinger met NFB animators Derek Lamb and Kaj Pindal. Lamb was showing excerpts from his project, Goldtooth and asked Fierlinger if he was interested in being the production house.

Pindal and Lamb later visited Fierlinger’s studio to discuss the project, but problems arose immediately.  “The problem,” admits Fierlinger, “was that I was drinking around the clock. Derek asked me a few times to wait until noon, but I was a disagreeable person.” Soon after, Lamb told Fierlinger that things werent going to work out.

Losing the job was bad, but worse still Fierlinger had called off all projects to work with Lamb and Pindal. But fate, the slithering slap in the face, pounded on Fierlinger’s door.  Having seen Fierlinger’s work at the OIAF, Pyramid Films called Fierlinger and asked him if he would like to make a film. They had a number of topics including teen suicide and drug and alcohol abuse. “I thought,” says Fierlinger, “I’m an alcoholic and if anyone can do this film, I can.”

US Healthcare matched Pyramid’s $20,000 fee and Fierlinger was off to the races. Fierlinger had a friend who worked in a rehab clinic and provided him with twenty five hours of interview tapes.  It was these tapes that finally convinced Fierlinger to quit drinking: “Listening to those tapes,” he recalls, “I knew I had to stop drinking. It’s why I’m shouting at my kids and not getting along with Derek Lamb.”

Using the interviews with re-hab patients, each story takes us through the habits, downfall and subsequent acknowledgment and recovery of each addict. Fierlinger gave each voice their own drawing style. The styles range from dark, grey sketches to Steinberg-influenced geometric drawings. Accompanying the story is a haunting, minimalist track. The power of the film lies with the combination of Fierlinger’s strong graphics, the soundtrack and the frank, unsentimental stories of these real people. There is not a drop of sentimentality in this film. It is very much a horror story.

The film ends with an emotional twist as we are introduced to a new character named Paul. Unexpectedly, we hear Fierlinger’s voice discussing his own downfall and recovery.

“It’s a strange thing,” says Fierlinger. “I failed Derek because I was drunk and right then I get a call to work on an alcohol film and not only get sober but meet someone who helped me.”

Tags
indie animation
Paul Fierlinger
It's So Nice to Have a Wolf Around the House
And Then I'll Stop
Jim Thurman
American animation
Animafest Zagreb
More From ANIMATIONWorld:
Next Post
I Have a Question Amanda Forbis & Wendy TilbyPrevious Post
A Practical Guide to Magic: Studio Ponoc’s ‘Mary and The Witch’s Flower’
Related Content
An evening with Paul and Sandra Fierlinger
Movie Review: 'My Dog Tulip' – Man’s Best Companion
Keep it in Motion: Classic Animation Revisited – George Griffin’s 'Head'
Keep it in Motion - Classic Animation Revisited: 'Notes on a Triangle'