Keep it in Motion - Classic Animation Revisited: 'The Heart of Amos Klein 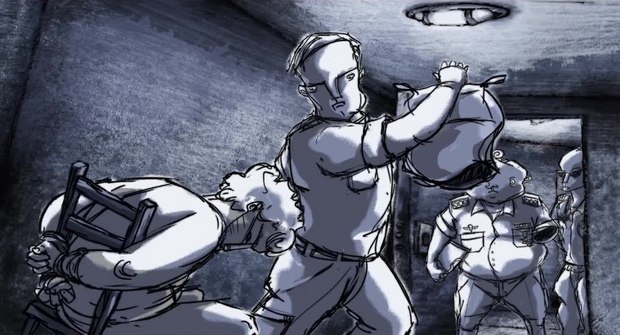 An early film from Michelle and Uri Kranot, the duo who made the acclaimed Nothing Happens (2016), Hollow Land (2013) and Black Tape (2010), The Heart of Amos Klein (2008) uses the life of a one-armed man straddling life and death to examine the violence, corruption and turmoil recent Israeli history.

As Klein undergoes heart surgery, we follow the course of his life in reverse -- which parallels key moments in Israeli history -- from his recent days as an apparently powerful military prick towards his younger days, all in an attempt to understand how Klein and other corrupt people are formed.

The Heart of Amos Klein, told using a combination of paint, drawings and live action footage, is less a forgiving film, than a film of understanding, an attempt to contextualize what makes people who they are. The final image of a new heart being inserted into Klein offers mild hope that he, like Israel, will experience a change of perspective.

While the film deals specifically with the tumultuous history of Israel, it can also be viewed on a more universal level (as with all of Kranot’s films) as it attempts to trace how a person reaches a certain point in their life. What has lead them to be on this road? The authors have crafted a surprisingly gentle and empathetic portrait of a person who, on the face of it, seems relatively despicable.

Now, let’s see someone humanize Trump, Putin and their ilk. That would require some kind of surgical artistry. Actually, never mind, we’ve had enough phony news.