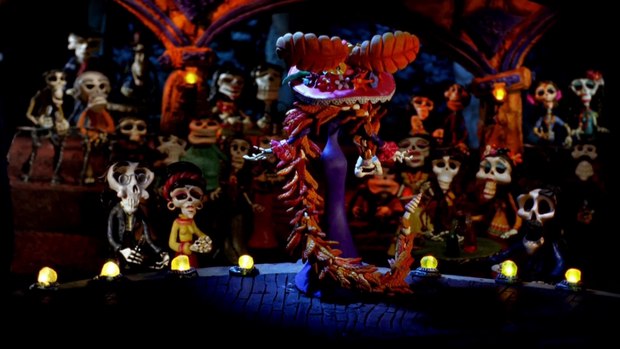 Death imagery is everywhere in Mexico. There’s no hiding it. It’s inevitable like…well… death. Walking through the streets of San Miguel de Allende or Guanajuana the last week, garish goth skelto figures greet you from countless shop windows. It’s at once a decidedly capitalist tourist schtick yet also a deeply unique, spiritual tradition that keeps the memories of those gone by alive. It’s not something we see much in other countries, especially the US and Canada where we tend to brush death to the sidelines in some desperate delusional attempt to deny its existence. I appreciate the Mexican way, the constant reminder that in life there is also death. It should not be feared. It should be denied. To do so is foolish. It should be embraced and used to remind how special being alive is…how incredibly fortunate we are to be among the ones who get the chance to breath.

This nifty stop motion work by René Castillo follows a newly minted scared shitless dead guy into an afterlife nightclub littered with those no more. The guy, who reminds me somewhat of protagonists in George Saunder’s latest novel, Lincoln in the Bardo, about a group of dead folks kinda stuck between life and death. A purgatory of sorts. Not quite sure if this deadclub is purgatory or a permanent spot. If it’s the latter, well, that’s not a bad place to end up. Drinking, singing, laughs. Could be worse. Just ask Dante.

Hasta los Huosos might also be infamous for containing one of the longest end credits in short animation history. They run just under 3 minutes. It’s kinda perfect. Just as the man struggles to accept his fate, the film feels reluctantly to end, to accept that blackness that must be.

An Interview with Priit Pärn
‘Baymax!’ Provides an Rx for Humor and Compassion
How Digital Domain Brought Photoreal Characters to Life in ‘The Quarry’
SCAD GamingFest: Building Shared Story Experiences with Diverse Character Design
Mission Critical: ‘Lightyear’s Journey to Infinity and Beyond
Putting the Fun in Dysfunction: The Non-Humanistic Therapy of ‘HouseBroken’
‘The Freak Brothers’: This is Your Humor on Drugs
END_OF_DOCUMENT_TOKEN_TO_BE_REPLACED