Keep it in Motion - Classic Animation Revisited: The Frog, The Dog, and The Devil

Every Thursday, Chris Robinson takes a look at films from animation’s past. This week he screens a golden oldie from 1986, The Frog, The Dog, and The Devil. 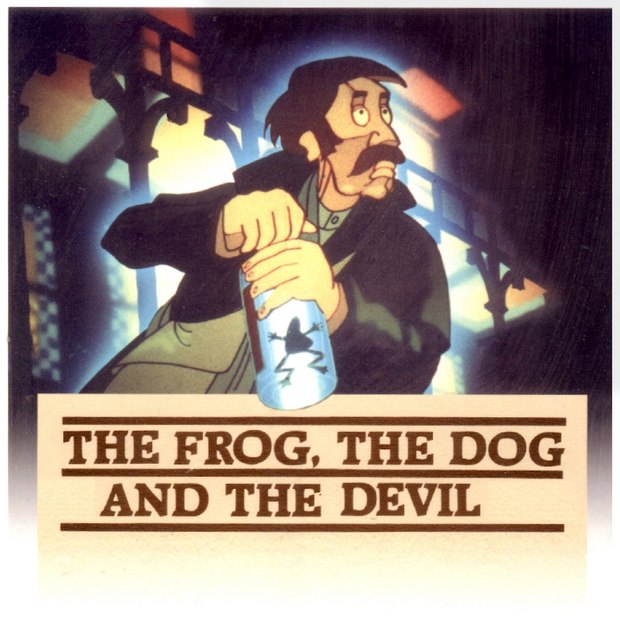 You don’t hear it so often these days, but there was a time when ‘getting lit’ meant drunk. Not sure what the etymology is, but I imagine it’s connected with fired up, and alcohol being a temporary cure for inhibitions. Lit might even connect to enlightenment though I don’t recall any such occurrences during or after the many benders I’ve forgotten. Regardless, lit up is an apt description of The Frog, The Dog and The Devil  (1986) from New Zealand animator, Bob Stenhouse. Getting lit isn’t just what the boozy protagonist does during a wild bender, the term also reflects the film’s glow-like look.

The story was inspired by The Devil’s Daughter (sometimes known as The Godley Ghost) an old ballad by New Zealander, Ernie Slow. Stenhouse was first introduced to the ballad by a colleague at the New Zealand Broadcasting Corporation (NZBC).

When Stenhouse later moved to the National Film Unit (the New Zealand version of Canada’s National Film Board), he proposed making an animation short based on The Devil’s Daughter. Stenhouse believed it was an ideal story for animation because “the ballad was a rollicking good yarn, plenty of action, allowed considerable impact in experimental visual effects and sound design and was New Zealand material.”

So, yeah, the story itself is fairly familiar. Sort of a Sleepy Hollow meets Kerouac. What really makes the film stand out is Stenhouse’s extraordinary visual effects. There is almost a neon-like glow throughout the film. The lanterns, lightning, puddles, water reflections – seemingly minor aspects of the film – become supporting characters owing to Stenhouse’s breathtaking paint with light approach.

Animated Characters: The Art of Babbitt – Part 1
Bruce Smith and Ralph Farquhar Talk ‘The Proud Family: Louder and Prouder’ Season 2
VFX is the ‘Thing’ for Tom Turnbull on Tim Burton’s ‘Wednesday’
We Need to Chat
Choc Chip Animation Riffs on Pop Culture in ‘The Art of Murder’
F is for Flake: The (Not So) Great Animation Robbery?
Re-VIEW: ‘Avatar: The Way of Water’ – A Miraculous Vision
‘Kung Fu Panda: The Dragon Knight’ Celebrates a Special Lunar New Year
END_OF_DOCUMENT_TOKEN_TO_BE_REPLACED