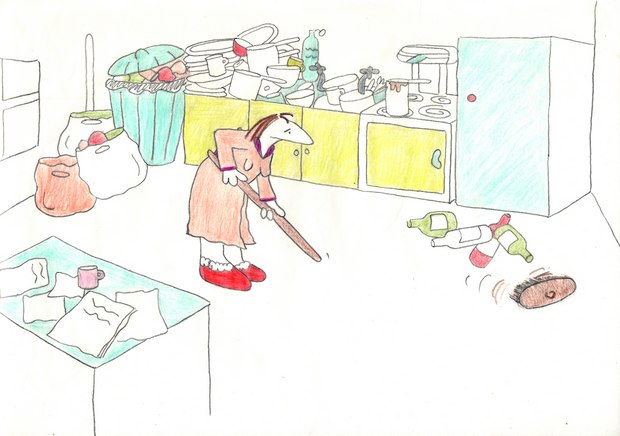 Oh how I miss the films of UK animator and writer, Candy Guard (Pond Life). I can recall her work from my early years at the OIAF. They were such a welcome tonic against the predominance of earnest works that overwhelmed the animation scene then – and now.

Remember that Little Rascals episode when Spanky and Alfalfa skipped school. They couldn't think of anything to do and end up doing nothing all day. Then Wheezer strolls by on his way from school. He tells them that “anxiety is the dizziness of freedom”, winks and walks away. Then Alfalfa snaps, loses his fucking mind and chases the startled Wheezer down the street, eventually catching and beating him while shouting, “Yes, but anxiety brings home the lesson that I cannot look to others, to the crowd, when I want to measure my progress in becoming a full human being.”

You don’t remember that one? I’m talking original Rascals, not the new crap. Hmm… maybe it was unaired episode.

Anyway, the words of poor Wheezer certainly apply to Candy Guard’s 1991 film, Fantastic Person, a blistering parody of a delusional and bored woman who loafs around her disheveled apartment drinking, dancing, and watching TV while developing a series of absolutely unrealistic life plans that will completely and utterly change her life for the better, tomorrow.

Feeling the weight of the world lifted from his being, Wheezer rises, dusts himself off, and smiles the smile of all smiles: the smile of liberation.

I like to believe that the ‘fantastic person’ has reached a similar realization when she awakens, looks at her list, adjusts it, and then goes back to sleep.

Regret, it can wait until tomorrow.