Every Thursday, Chris Robinson takes a look at films from animation’s past. This week he uncovers a gem from Joanna Quinn. 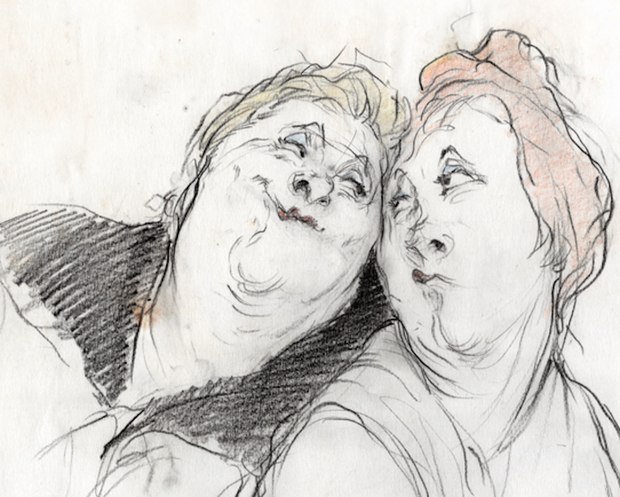 In 1991, Joanna Quinn was approached by French producer Didier Brunner to participate in a series called Cabaret, comprised of films based on works by Toulouse Lautrec and made by different animation directors.

Quinn settled on Lautrec’s painting of two women lying on a bed together. “I liked the idea of challenging the artist’s portrayal of these women as prostitutes, as if we are voyeur peeking into their sordid world, a world in which the artist seems to have an intimate relationship with the women who allow him to paint them relaxing on a bed together, hinting at their lesbian relationship. I wanted to depict them as ordinary ‘working women’ who were posing as models for the artist in return for money.

This is precisely what Quinn achieved in Elles. The sketchbook approach adds another layer of voyeurism to the film. The viewer is watching the artist’s interpretation of the two women and, in a sense, also observing the artist via her sketchbook. Under Quinn’s confident hands, the women also quickly resemble women from Beryl’s world: plump, funny, raunchy, and freewheeling.

Achieving her ideas was a challenge because Quinn was asked to work with a French scriptwriter, Hortenese Guillimare. Quinn quickly discovered that they had very different attitudes towards the women in the painting. “Hortense was very French and wanted to celebrate the sexuality of the two women and make it more into a romp. To me that was an anathema as I thought it was reinforcing the exploitation of these women by the artist but I gave in!”

Quinn lost the battle, but maintains that she thoroughly enjoyed the experience. “It’s not something I would ever have done if I had been working on my own. That’s why I enjoy working with other people so much, because you are forced to see things from another perspective and your own beliefs are challenged and enriched.”