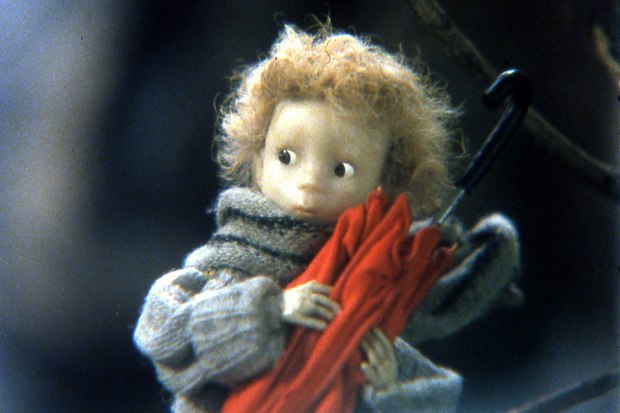 Since its holiday time, I thought I’d screen Chucha (Choo Choo, 1997) a more obscure work and one that is set during the Christmas holidays.

Now…okay… it’s got stuff that bugs me. The puppets creep me out a bit. The setting is striving for a realism that makes you think, ‘well, why not just shoot it live’ and the flood of big band music often makes you feel like you’re watching a bootleg copy (you aren’t. this is the original soundtrack).

Negatives out of the way, there’s an old school charm to the film. It’s made by human hands and has a perfectly unpolished movement and design. Bardin neatly fuses dream and reality…and this, contradictory my critique above, serves the film well, but keeping us off balance. We’re never quite sure what is real and what is dream. Even the opening scene. Is the figure with the dog the boy as an adult? Is this movie a memory? Or is that just a neighbour, unconnected (and uninvited!) to the party.

Beautifully designed and animated, we follow the boy as he first navigates through the beguiling, frustrating and lonely world that is an adult party (the teddy bear joke is a good one) before he meanders off to his room and enters some sort of dreamscape, wandering up to the attic where he crafts his own world and friends.

Though I could do without the closing ‘lecture’ about adults rediscovering the child within (I mean come on, the adults seem to be having a great time at their party. What the hell is wrong with that?), Chucha, overall, seems to be a celebration of a child’s imagination and creativity – something that one could argue...well, ok…I don’t want to sound like a grumpy oldish man… maybe it hasn't been lost…but it’s sure as hell changed in this digital age, and I’m not sure it’s for the better.