Every Thursday, Chris Robinson takes a look at films from animation’s past. Today: Bow Tie Duty for Squareheads (2004) 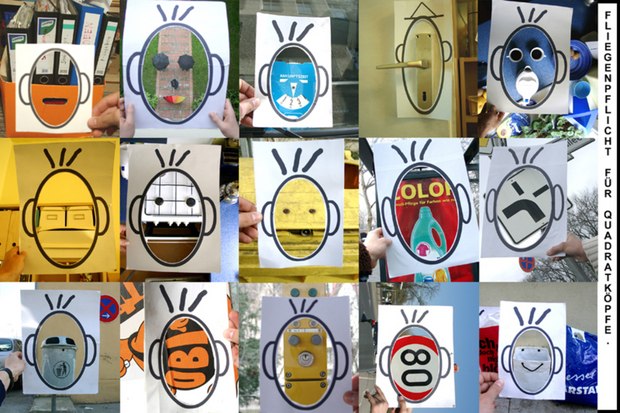 In our society now, we prefer to see ourselves living than living.

Guy Dubord, The Society of the Spectacle

I imagine Guy Dubord, the founder of the Situationist International movement and author of the prescient Society of The Spectacle (1967) might have gotten a kick or two out of Stephan Müller’s 2004 short, Fliegenpflicht für Quadratköpfe (Bow Tie Duty for Squareheads), a clever and absurdist piece of subversion.

I can’t recall where I first saw it, maybe in Annecy of all places (which at that time was not really known for showing ground breaking/edgy shorts) but it was a refreshing – if a tad long - piece of hilarity. I do recall a few people being upset about it, saying that it wasn't really animation. Fuck them and their likely now dead pets. First, it has animation but more than that it feels like animation, has the spirit of not just animation, but also collage, like live-action collage/performance art that’s not all that far removed from Situationism (where the aim was to recontextualize a work of art or literature - isn’t literature ‘art’ by the way? – in order to shift its original meaning or intent).  Sure, this isn’t 1968 France, but these German kids are out there mucking about in true Dada style with also sorts of Capitalist ads and signs, twisting, adjusting, tweaking and toying with their original meanings and contexts.

It’s a shame we don’t see more of this. Subversion itself has become coopted and weakened today, limited to emojis, gifs, memes, meaningless jabs by talk show hosts at those in power, or random clown sightings.

Surely we can - and must - do better.