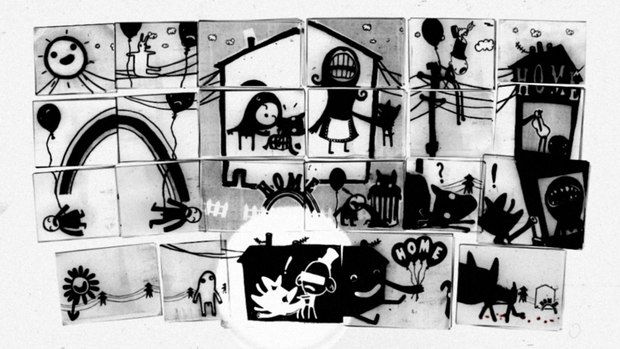 With whispers of Phil Mulloy, this mesmeric, nihilistic portrait - from Stephen Irwin (Moxie, The Obvious Child) - of a small black dog who is abandoned, beaten, raped, and burned by an assortment of shitheads, is a technical wonder that incorporates, flip book animation, non-linear looping, sliding puzzle narrative, and a haunting and hypnotic soundtrack by Sorenious Bonk.

Irwin’s film seems loosely inspired by The Rake’s Progress, William Hogarth’s series of eight paintings that depict the fall of a spoiled and gluttonous rich kid (Tom Rakewell) who abandons his love for the lascivious pleasures of London and winds up in a mental hospital.

In Irwin’s version though, there is no heaven or hell, no deity or demon. The canine protagonist is simply a naïve victim of a black hearted world swayed by a never ending shuffle of cruelty and violence.

The lesson, kids, is that sometimes there just aren’t any rainbows, heroes or clear skies, only a dour world filled with raging broken beings hell bent on fucking you over and under until you’re just like them.

VFX is the ‘Thing’ for Tom Turnbull on Tim Burton’s ‘Wednesday’
We Need to Chat
Choc Chip Animation Riffs on Pop Culture in ‘The Art of Murder’
F is for Flake: The (Not So) Great Animation Robbery?
Re-VIEW: ‘Avatar: The Way of Water’ – A Miraculous Vision
‘Kung Fu Panda: The Dragon Knight’ Celebrates a Special Lunar New Year
END_OF_DOCUMENT_TOKEN_TO_BE_REPLACED