Every Thursday, Chris Robinson takes a look at films from animation’s past. Today, the Fleischer studio classic, Bimbo's Initiation (1933) 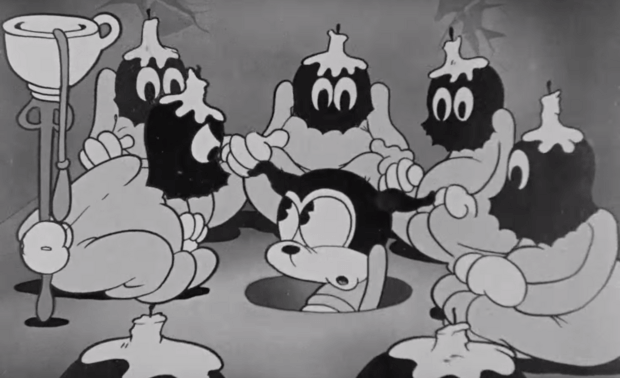 “I have come to believe that the whole world is an enigma, a harmless enigma that is made terrible by our own mad attempt to interpret it as though it had an underlying truth.”

One of my all-time favourites. Just so rich for appropriating for any occasion.  It’s kind of a speed read Dante’s The Divine Comedy or a quick summation of Beckett… or even a cartoon guide to existentialism: in a godless world, you make up the meaning, you get to decide who you are and what you want.

I could see Kierkegaard digging this. Wasn't he the guy who said you’re screwed if you do, screwed if you don't: “I see it all perfectly; there are two possible situations — one can either do this or that. My honest opinion and my friendly advice is this: do it or do not do it — you will regret both.”

You can also read the film today as a swipe at consumer society (or religion…which is pretty much just the same thing, making the same credit card promises: buy now, pay later).  Every minute of every day we’re being asked to be a member of some product…to consume something that will make us better, make us part of the special club… It’s a constant struggle to fend off those phony tempters and their twisted psychology 101 bullshit.

…or maybe it’s just a great love story. The guy won’t sacrifice, won’t give himself up for anything except the right kinda love… then again… he is a bimbo after all...  maybe he’s turned his back on endless enlightening opportunities just for a bit of Boop ass. And what’s with all the other Boops… is this some sex fantasy gone amuck… some sex cult?

Probably doesn’t matter where he goes, so long as he goes.