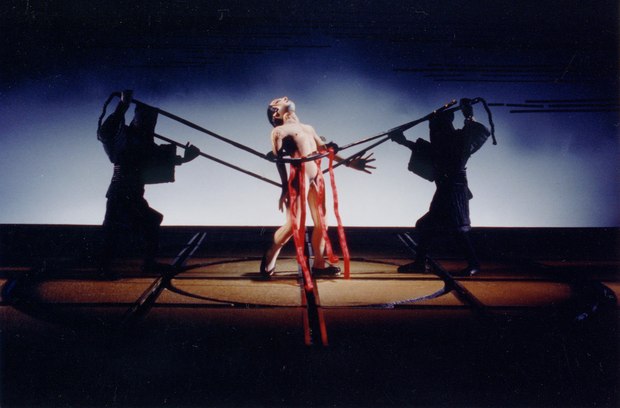 Screen Play (1992) is presented as a Japanese kabuki play. A revolving set sits in the middle of the frame. A narrator enters the scene and tells a tale of forbidden lovers who go against their families to be together.  Throughout the tale, moving screens trigger the change in scenes. The camera, though, remains stagnant, giving the viewer the feeling of be audience members in a live performance.

Just when it looks the story has ended happily, a hideously masked creature breaks through the screen, slices the narrator’s head off and then opens another screen to hunt down the lovers. Blood and guts flood the screen. The creature kills the male lover before being killed by the woman. Alone, the woman then takes her own life. In an instant, Purves’ stylish, sexy and romantic tale turns into a Quentin Tarantino bloodbath. As the bloodshed unfolds, Purves also switches the audience’s perspective. The camera comes alive and brings the viewer right smack into the action. Our distant, objective distance is shattered as we become participants in the carnage.  After everyone is suitably dead, the camera pulls back to reveal another screen, which is further seen as part of a film set and ultimately the camera pulls back to marked-up script in a binder. Finally, we see the hand mark a check on the script and close the binder. The film strip flickers into darkness.

To watch Screen Play on Vimeo, click on the image:

Mike Rianda Talks ‘The Mitchells vs. The Machines’
Scanline VFX Tackles the Cosmic Rewind in ‘Zack Snyder’s Justice League’
A New Post-Clone Wars Saga Begins in ‘Star Wars: The Bad Batch’
‘The Mitchells vs. The Machines’: A Scrapbook of Art, Nostalgia, and Killer Robots
How Old Ghosts Shape Our Lives in ‘Baby Blues’ Music Video
DNEG Revisits Some Old Friends in ‘Zack Snyder’s Justice League’
Creating the Stylized, 2D-Inspired Fun of Pixar’s ‘Luca’
Getting a Bang Out of ‘The Equalizer’ VFX
END_OF_DOCUMENT_TOKEN_TO_BE_REPLACED