Every Thursday, Chris Robinson offers a spontaneous take on films from animation’s past. This week: Lewis Klahr's Altair (1995) 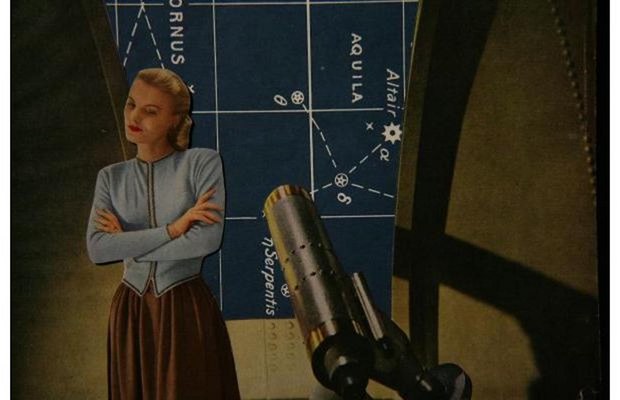 Something about collage work appeals to me. That sense that anyone can do it. I mean we did that as kids… just cut and pasting magazines. Hell, l learned about Lewis Klahr’s work via a book about my beloved band, Guided by Voices, whose honcho, Robert Pollard is the master of DIY (releasing 3-4-5 albums a year….rock pop prog and literary collages) and he also does some nifty collage art. The idea that you can just go and remove, cut destroy mix glue tape transform an original image and then give it an entirely new meaning is such a liberating, punkish and inspiring feeling.

Klahr’s film, Altair (1995) shows a love of film noir, nightclub montage scenes, 40s magazine images… and certainly seems to also be about the bullshit of booze. Booze bottles and glasses occupy almost every frame of the film… …always tempting us with the promise of release, joy, love… all our desires fulfilled… course it doesn't show us the pukes blackouts regrets jail cells.

But…this strikes me as more a film about desire… and our endless and futile quest to be fulfilled....to be the brightest star (which the film's title references).

Makes me think of the old French thinker, Jacques Lacan. He wrote about this mirror stage… that’s the moment when a baby catches its reflection in the mirror and comes to the startling realization that it’s alone, cut off (out?), separated from the universe. Lacan theorized that this leads us to grow up unfulfilled…always striving chasing searching for anything that will help make us one again.

Cutout/collage is an apt technique to ponder the vapid and false cut and paste identities promised to us every minute of every hour of every day. We chase and chase these hollow possibilities of perfection…desperately trying to construct or reconstruct a state that never was to begin with. It’s not just futile, it’s a fucking tragedy.

Choc Chip Animation Riffs on Pop Culture in ‘The Art of Murder’
F is for Flake: The (Not So) Great Animation Robbery?
Re-VIEW: ‘Avatar: The Way of Water’ – A Miraculous Vision
‘Kung Fu Panda: The Dragon Knight’ Celebrates a Special Lunar New Year
END_OF_DOCUMENT_TOKEN_TO_BE_REPLACED