Every Thursday, Chris Robinson takes a look at films from animation’s past. This week he screens Philip Hunt's mindshifting 1994 cult classic, AH POOK IS HERE. 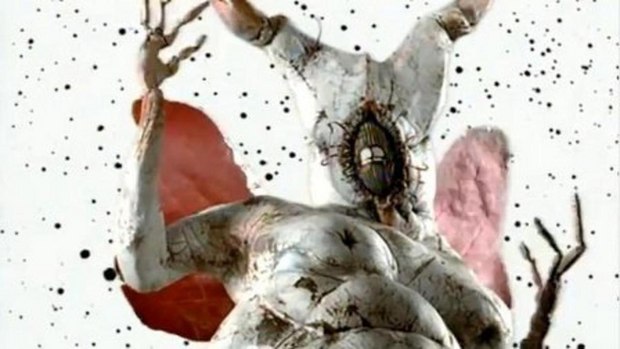 I must have seen Philip Hunt’s AH POOK IS HERE with the OIAF (Ottawa International Animation Festival) selection committee during the summer of 1994 (back when I just coordinated the committees and had no input. What? I heard that! That’s not very nice. I have children. They might read this).  It was a definite ‘what the fuck’ (that means ‘WTF’ for you Flanderses' types) moment. I was still a newcomer to the animation world. There had already so many films that were unlike anything I’d ever encountered before I entered the doors of the OIAF, but AH POOK, well that was something else altogether. Like all twentysomething wankers, I knew Burroughs and was really into the notion of cut-up/collage writing (even if I didn’t fully grasp it then). Plus, Burroughs seemed to be all over the place in those days via his record, Dead City Radio (1990) along with the David Cronenberg adaptation of Burrough’s most famous work, Naked Lunch, a year later. So… I was relatively familiar with this world of bugs, aliens and mind-shifting ‘medications.’ Still… Hunt’s take was pretty crazy and miles away from other films that year like The Wrong Trousers, Bob’s Birthday and that snooze cruise, The Mighty River. In those days, AH POOK just seemed like a stoner film. Now, well, it seems, well, almost clearheaded and true.

“In late 1993,” Hunt tells me via email, “my 12-month residency at the Filmakademie Baden Wurttemberg was coming to end and I found myself in a bit of a quandary. I had been lost for some months, working on a longer film and I’d hit a wall with it ... The only thing I still liked was a sketch of an incidental character that I could not quite fit into the original project. The character was of a lumpen, introspective chicken-like ‘troll’, who sat in a tree and commented on proceedings. The inspiration for the troll came about from listening to the eponymously titled ‘William S. Burroughs / John Giorno’ album of spoken word recordings an artist friend of mine had given me to cheer me up (thanks Nick Higgins …) and I’d become a tad fixated on a recording of AH POOK IS HERE that featured on it. I realized that the creature I’d built bore all the characteristics of how I imagined Burroughs Mayan Death God ‘Ah Pook the Destroyer’ might look and that I was trying to fit this character into the wrong film. Thereafter it seemed perfectly clear that I should simply try and reflect the original meaning of the text, but through the prism or perspective of my Ah Pook, as he sits on his burnt-out planet, with nothing left to conquer.”

Surprisingly, Hunt’s version is comprised of not one, but three, recordings off Dead City Radio “In an effort to further shape the film,” says Hunt, “I spliced in a second act using the recording of ‘No More Stalins No More Hitlers’ which seemed to sum up Pook's retreat from his purpose and the world, whilst the final act of taking his own life seemed the only decent way out for Pook – and partly because I liked the absurdity of his soul singing ‘Falling in Love again’ (In German…) as the credits rolled.

And, as we all want to know, did Hunt have occasion to make contact with dear ol’ Bill?

“I outlined [my intentions] in an embarrassingly gushing letter to William Burroughs – who was by turns gracious, patient and possibly just mildly amused by my callow audacity, as a letter from Burroughs was enough for Island records to allow me a usage license. In turn Hal Wilner [who produced Dead City Radio] & John Cale [who provided the music for two of the excerpts] both also kindly agreed – I’m still a bit amazed by that - wanting only to see the result. My abiding wish was that Burroughs, Wilner and Cale would all be at least ok with what I made and yet they could not have been nicer and more open to my animated intrusion. My second Burroughs letter arrived after they had all seen the final result and put a smile on my face that has never abated.”

Thanks to Philip Hunt taking time to revisit this remarkable piece of animation history.

AH POOK IS HERE from STUDIO AKA on Vimeo.