Keep it in Motion - Classic Animation Revisited: 'Accidents Will Happen'

Every Thursday, Chris Robinson takes a look at films from animation’s past. Today: Accidents Will Happen by Annabel Jankel & Rocky Morton. 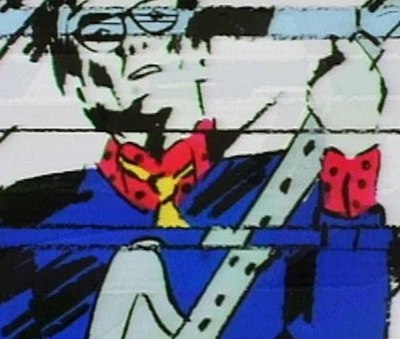 Since the early 1990s, I’ve seen a titanic load of animation films every year. We’re talking over a couple of thousand a year of late, so I’m always pleasantly surprised when I stumble upon something (good) that I’d never seen before. That’s this case with this stunning video from 1978 for Elvis Costello and The Attractions’ song, “Accidents will Happen”. The video is divided into three segments. First we have choppy pop art footage of the band that has a distorted colour lines look you’d see on old televisions. Second, we see a series of common daily accidents ranging from burnt toast, cups smashing, and bathtubs overflowing to the accidental launching of a nuclear assault. Third, there is final short ‘green’ computer footage of Costello. Costello has said that the song itself is about infidelity… and I assume the philanderer’s inability to own it (“Accidents will happen, I only hit and run”) …and to just casually write it off in a typically English ‘sweep it under the rug’, ‘nothing to see here manner’. Today, the song takes on a different meaning in this age of liars, phonies and hucksters, people not owning their shit… where we live in a society of endless ‘accidentally unpurpose’ moments followed by faux apologies. As Costello sings: The video was directed by Annabel Jankel & Rocky Morton. Not knowing much about the video or the directors, I tracked down Annabel Jankel (who co-created the Max Headroom character) to toss her a few routine questions about how the video came about:

How did this song land on your laps?

I recall the producer Martin Baker had a promo company called Rock Biz Pics and he approached myself and my co-director as we owned an animation company called Cucumber Studios, based in London. As Elvis was unavailable for a live action shoot, animation was presumably mooted. By the way, where we created it, was the same space in the same building that Ziggy Stardust is photographed outside of for the Spiders From Mars album.

There are, from what I see, three distinct parts:

We sent a photographer to shoot 35mm still film on a motor drive - the band and Elvis, against a white cyc so we could use the source 35mm stills as material for the basis of a stylized designed rotoscope technique we developed for the film.

2. Various common accidents that grow from burnt toast to the nuke button being pushed.

Accidents Will Happen inspired a visually focused conversation that threw up a bank of ideas to do with Accidents - from the mundane Domestic to the catastrophic no-going-back.  Accidents of course can be "Accidents" which is what we are wrangling with now, 40 years later - in the current political climate.

3. The green almost computerized looking part at the end.

It's not "almost computerized" looking. It's actually computer generated. I believe one of the first uses of CG in a music video - if not the first.  It's a vector computer generated read out of Elvis, filmed with a 16mm Bolex off a monitor at the architectural dept. of a big London University. They were the only ones that had the technology at the time. It was a computer interpretation, or rendering - of a graphic composition, after the well-known Piet Mondrian painting. At the time - I was renting a studio flat where I lived, with my co-director, which was where Mondrian had had his studio, in Ben Nicholson's house, in London. I believe Piet Mondrian channeled the composition for the sequence - inspired by the built in bookcase in our one room flat.

The band footage has a pop art feel mixed with what looks like an old TV look..where the distorted colour lines keep 'interrupting' the image of the band.

That was inspired by the ongoing interference on TV at the time, late 70's, that was par for the course. And as such, the ongoing regular TV visual glitch became an integral part of the accidentally impaired visual image system. Rabbit ears were our means of gaining reception.

Did you compile a list of typical accidents that happen?

Many many accidents were bandied about, then were eventually pared down to the final ones included, and that were storyboarded for inclusion to be animated.

Elvis Costello "Accidents Will Happen" from Annabel Jankel on Vimeo.