In the parody short directed by Caitlin VanArsdale, ‘The Mitchells vs. The Machines’ filmmaker heroine creates a sock-puppet action film featuring a redoubtable canine; short releases today as an exclusive bonus feature on the film’s Blu-ray release. 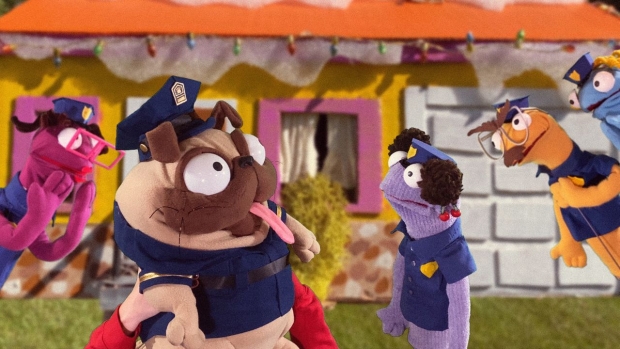 In a world where the holidays are being haunted by the Candy Cane Kidnapper, there is only one dog with the skills to solve the case. In Dog Cop 7: The Final Chapter, budding filmmaker Katie Mitchell uses the limited resources available to her to create an epic crime caper.

The all-new stop-motion / live-action / CG mashup mini-movie, directed by Caitlin VanArsdale, who served as a storyboard artist on Sony Pictures Animation’s The Mitchells vs. the Machines, is a hilarious sendup of genre films and a loving tribute to an amateur auteur with a ton of ambition and a shoestring budget. Dog Cop 7: The Final Chapter is available today as an exclusive bonus feature on the feature film’s home entertainment Blu-ray edition; you can find all Blu-ray, DVD and Digital release details here.

We spoke with VanArsdale about the joys and challenges of making a great bad movie. Have a good chuckle at the clip first:

AWN: What was the genesis of the project? And how did Monchi become the star?

Caitlin VanArsdale: Mike Rianda, the director of The Mitchells vs. the Machines, wanted Katie to try and emulate an action movie in her own work. The only actor around to play the role was a wall-eyed pug.

AWN: This was your first time directing. What was that like for you?

CV: It was a challenge because of time constraints and working with people over video chat only, but everyone was so communicative and helpful that we got through it pretty painlessly. Directing this short was a great opportunity for me. I'm currently directing on an adult television show, and the experience of directing the short was a great way for me to transition and learn how to lead a team and create a final product.

AWN: How long did the production take?

CV: The production was only a few months long – we really had to hustle to get everything built and shot in time! Luckily, brothers Matt and Mike Chapman, who built all the puppets and sets, and shot the short, were incredible and knocked everything out of the park insanely quickly. AWN: What was the most challenging thing about making the short?

CV: Probably time constraints, as well as trying to do edit sessions over Google Meet. We didn't have access to any edit streaming software for most of it, and the Chapmans are three hours ahead of us on the West Coast. We had to do a lot of pausing and exporting small bits to make sure the timing was right and everything played the way we wanted it to.

AWN: It’s a pretty funny film. Was it fun to make? What was the funniest thing that happened during the production?

CV: It was so fun to make – who doesn't love working with puppets? There were quite a few funny things that happened, many to do with the puppets themselves and trying to get certain shots, or acting performances. The Chapmans built a giant mitten to use as Jade's hand on the shifter in the police car, which weirdly worked perfectly and was hilarious the first time we saw it. The section of the short where Katie edited footage for Aaron was originally supposed to be footage of a low-budget dinosaur action film, but we couldn't get the rights in time, so the Chapmans lent us footage from one of their family parties that happened to have a cardboard dinosaur running through it!

AWN: What’s your favorite scene and/or idea and/or dialogue?

CA: I love all the scenes between Dog Cop and Detective Jade. The short, in true Mitchells style, is a metaphor for Katie’s relationship with Jade - her college friend and crush, who we meet in the film. Katie wants to ask Jade to be her girlfriend, and Dog Cop 7: The Final Chapter is about Katie gathering up the nerve to ask her. We got to use some "Katie vision" elements, and the scenes feel really funny and sweet at the same time, I think. As an LGBTQ+ person myself, it's really gratifying to be able to explore Jade and Katie’s relationship beyond the films, especially in this cute and silly package!

CA: Dog Cop will never die!!! I honestly don't know what the future holds for him, but I imagine that Katie will revisit the franchise as long as people are interested in watching! Dog Fireman could be an especially fun (and dangerous) occupation for Katie to coerce her family into working on. The world is Dog Cop’s oyster!