From K-Pop to Cajun: The Musical Mix of ‘Kipo and the Age of Wonderbeasts’

Composer Daniel Rojas discusses how music is at the heart of DreamWorks Animation’s animated adventure that celebrates diversity, nature, and the bond between friends-turned-family. 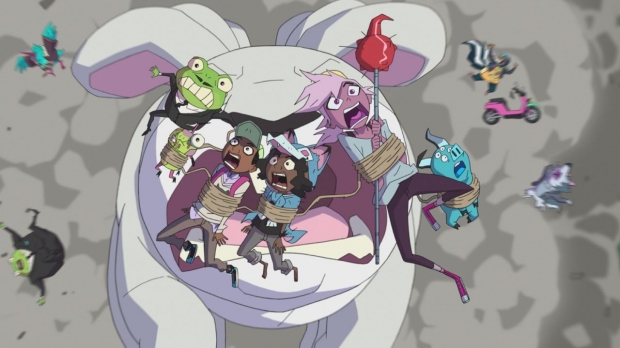 From rap and rock to Cajun and K-pop, DreamWorks Animation’s musical series Kipo and the Age of Wonderbeasts features tunes as eclectic and diverse as its characters. The GLAAD Media Awards-nominated 2D show, created by Once Upon a Time’s Bill Wolkoff and Megamind’s Radford Sechrist, is adapted from Sechrist’s 2015 webcomic Kipo and has run for three seasons.

Taking place somewhere around the 23rd century, the animation follows the adventures of Kipo Oak, a thirteen-year-old human girl, who becomes separated from her father and her underground home. Kipo finds herself lost among her upstairs neighbors above ground in a run-down city full of vegetation and mutated, anthropomorphic creatures known as “mutes.” When Kipo meets the young Wolf, a hardened orphan living on her own, Kipo begs for help finding her way back home.

On Kipo and Wolf’s journey to reunite with Kipo’s father, the two meet a variety of new friends -- an upbeat human named Benson and his insect companion Dave along with a mute pig named Mandu. Their adventure takes another turn when a tyrannical Mandrill threatens the home of Kipo’s friends, and the pink-haired protagonist must access the beastly power hidden within her own DNA to help them.

In addition to the celebration of diversity, nature, and the bond between friends-turned-family, music is at the heart of the show; the score and original songs are composed by Daniel Rojas, known for his music on live-action feature films like Room and Downsizing. We recently talked with Rojas about what it was like to compose for Netflix’s uniquely animated series, creating songs for musical groups made up of snakes, wolves, narwhals and more. Victoria Davis: For the last decade, most of your work has consisted of composing for live-action blockbusters and some CG short films. What drew you to a 2D animated series like Kipo? How did you get involved with the project?

Daniel Rojas: My agency sent me a brief towards the end of 2017, and it looked really fun. The brief was asking for a bunch of different musical styles. All I knew at the time was that it was an animated show for DreamWorks, and I'm a big animation fan so that sounded great to me.

I sent some demos and then we ended up having two or three rounds of "spec," which are custom demos done to picture. You sign an NDA; they send you some storyboards or animatics and you write to those. The whole process took a few months, and it wasn't until April 2018 that they told me I had been chosen for the project. It was obviously very exciting and, at the time, the biggest project I had gotten, so it was really meaningful to me. Once I met Rad Sechrist and everyone on the creative team, it was even more exciting because we were all on the same page. I love writing and producing a wide variety of genres, and this project not only allowed but encouraged me to tap into it all.

VD: Most “kids’ animation” these days, like Kipo, isn’t just for kids, but appeals to a wide age range of audiences, including young adults. How do you go create a musical composition that is designed to engage so many different ages of viewers?

DR: I always try to approach things for a general audience, because I find that a good number of kids gravitate towards the same music their older siblings or adults listen to. When I was a child, I was always listening to what my brother, cousin, and even parents liked, much more than so-called “children’s music” and I think I wasn’t alone in that.

So, in general, I prefer to write music that doesn’t sound childish and, in the case of Kipo, we pushed it even farther by bringing pretty adult-sounding hip-hop and trap elements, and kids have really liked it! It’s still important to keep lyrics family-friendly of course, but kids nowadays have so much more access to all kinds of music that their ears have broadened, and it allows us to incorporate all kinds of sounds into the music, as long as it has a cool vibe. VD: I’ve heard from many composers who work in animation that they sometimes don’t get to see the fully animated visuals before working on the music. That it’s often primarily concept art they are working from. Was that the case for you on this series?

DR: That’s often true yes, but in the case of Kipo, once we got to scoring, I was given pretty advanced animation. When we worked on the songs, it was all animatics and storyboards, but when I wrote the underscore the animation was much more advanced.

But for the original songs, we did most of them towards the end of the writing process before the animation. I would get rough script ideas from the writer’s room and come into DreamWorks for some creative meetings. I then wrote versions of the songs until we all felt they were ready, and then those songs were recorded with the voice cast and sent over to animation. I was also able to incorporate sounds and even musical themes and motifs from the original songs into the score to make it more cohesive.

VD: Other composers I’ve talked with have said scores aren’t always given enough credit, or are not always recognized by viewers, for how much they add to the story and setting in a show. But, if that music is taken away, it takes with it a lot of atmosphere and emotion. How does animation play a vital role in deciding the tone for the music and, in the same way, does the music ever influence the look of the show?

DR: Music in animation is pretty much another main character. It helps define the whole aesthetic, pace, and feel of the show. The story and visual design are, without a doubt, the main things that influence the sound of the score for me. Although, there are other things, like the voice acting, that can also influence your approach because it can bring unique subtleties into characters or different types of comedy than what was originally on paper.

For Kipo, music influenced the look of the show very heavily. Rad had mentioned he was always listening to music as he designed this world and characters, and even had specific musical styles or artists in mind when designing the different gangs of mutes or specific human characters. It can be seen in the way some of the characters dress and present themselves, like Benson, the Snakes, or the K-Pop Narwhals. VD: Were there any unique challenges or rewards during your composing for this show? Were there references from outside sources you used to inspire you?

DR: For sure, this show was unique in many ways. The main challenge I think was trying to keep things fresh musically throughout the three seasons, because even in Season 1, we had so many different styles and sounds that I think we had to dig a little deeper as we went on to Seasons 2 and 3 to keep bringing new things onto the show. The reward was ending up with a soundtrack that’s extremely varied but still maintains a through line, which I feel fans of the show have really appreciated.

As far as references, we had a few particular ones like Wu-Tang Clan for the wolves because GZA was voicing one of the Billions wolves. But in general, we just had a giant pool of influences across several genres such as hip-hop/trap, folk (Timbercats), 90s rap (Wolves), rock (Snakes), K-pop (Narwhals), Zydeco/Cajun (Jamack), John Carpenter (Deathslakers), Mozart/Berlioz (Scarlemagne), and many others.

VD: What do you enjoy about composing for an animated series as opposed to any other medium, such as live-action?

DR: In general, animation allows you to take things further. Live-action tends to be more restrained, because a lot of the drama and story arcs rely on the actors and settings. Animation often is more still. We have voice acting of course but it’s not the same, so music must do more. Animation scores are rarely ambient and non-descriptive in the way a lot of live-action scores are. As a composer, it allows you to be bolder and more unhinged! VD: With the Emmys approaching and this show being considered for its music, how do you think this series stands out both visually, musically, and story-wise? What sets it apart from the other many musical animated series?

DR: The visual style and character design is unique. I’ve never seen anything quite like it. The backgrounds and colors are also stunning and very different to other shows out there. It’s also a show that embraces all types of diversity and feels very inclusive, without ever feeling forced, which I think is a huge accomplishment for the writers. As far as music goes, our approach was to complement that diverse world with a wide variety of styles to give each group and main character an identity of their own while still maintaining a cohesive sound for the show.

That's why it all has a modern spin, even if Jamack has a Cajun/French influence and the Snakes play metal guitars, they both meet in the middle with the type of production, mostly in the percussion or beat. There’s also a good amount of more traditional scoring throughout, but even that is produced with contemporary sounds, so it matches the more song-based musical themes. Another big thing that I feel sets Kipo apart is the fact that we had a lot of great licensed songs from a huge pool of artists that music supervisors Kier Lehman and James Cartwright had access to. That helped bring other voices that inspired me and helped the show stay fresh throughout. I think it’s safe to say you won’t find any show that looks or sounds like Kipo, and that’s what makes this show so special to all of us involved.