After five seasons of kids versus dinosaurs, mercenaries, mad scientists, and teen angst, the intrepid ‘Camp Fam’ must now content with camper against camper as the Annie Award-winning DreamWorks Animation and Netflix series comes to a ‘gnarly’ conclusion. 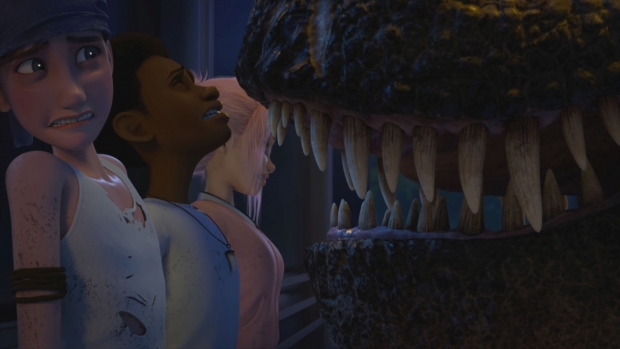 Up to this point, DreamWorks Animations’ Jurassic World: Camp Cretaceous, it’s animated TV series offering within the blockbuster Jurassic World franchise, has focused story arcs on kids versus dinosaurs, kids versus mercenaries and mad scientists, and dinos versus power-hungry tech engineers. But in the show’s fifth and final season – releasing today, July 21 on Netflix – the story focuses not just on kids versus their own family members, but it also pits camper against camper.

“We've been talking about this since we were doing Season 1,” says executive producer and showrunner Scott Kreamer. “It's the same reason why we had to get off Nublar and go somewhere else. You don't want things to get stale. And you want to keep surprising the characters and surprising the audience. And so, as we break each season, we first talk about where we want each of the characters to go. And a lot of that starts with, ‘What haven't we seen them do?’ and ‘What dynamic have we not shown?’ and ‘What would be compelling and entertaining to watch?’”

For the past four seasons, Jurassic World: Camp Cretaceous has followed the life-and-death escapades of six teenagers, chosen to be the first to experience Camp Cretaceous, the new adventure camp on the opposite side of Isla Nublar. Set against the events of Jurassic World, the campers must turn to each other for support and survival as dinosaurs break free of their territories and wreak havoc on the island. In Season 4, the campers escaped to a new island, also inhabited by dinosaurs, but they’re being experimented on by Mantah Corp. The campers decide to try and save the dinos, only to discover they are outmatched. But Season 5 begins with the arrival of Kenji’s father, Mr. Kon, and the six teens experience renewed for rescue and liberation of the dinosaurs. But, discovering that his father has his own questionable plans and ambitions regarding the future of the dinosaurs, Kenji finds himself stuck between the long-standing desire to gain his father’s approval and doing right by his “camp fam.”

“With Kenji showing a lot of growth over the seasons, it just felt like a ripe area to get into,” explains Kreamer. “If you go back, there's been little seeds of it. In Episode 7 of Season 1, when they're on the monorail, we get the idea that maybe Kenji’s dad wasn't around so much. And then in Season 3, once we get to Kenji’s condo, we start to learn a bit more and we've been seething in this absentee father who, even though he wouldn't admit it, Kenji was desperate for his attention, respect, and love.”

In one of this season’s early episodes, where Kenji and Darius come face to face with a T-Rex in an effort to show Mr. Kon that dinosaurs are not mindless killing machines, Kenji makes the comment, “Oh, my god. If this doesn't work, and I die, my dad will never respect me,” implying that the disrespect of his dad would be a fate worse than being eaten alive by a carnivorous beast.

“It doesn't matter what age you are,” notes Kreamer, “people want, if not approval from their parents, at least some acknowledgment. And that's something that we definitely wanted to get into in this last season. What do the kids look like when they're not constantly on the run? You can only get so much introspection when you're constantly being chased by teeth.” With six main characters driving the show, it’s a considerable amount of ground to cover, even over the course of five seasons. But the show has already dived into Darius overcoming his fears and growing as a leader, Yaz struggling through PTSD, Ben having an identity crisis, Sammy dealing with the questionable morals that come with saving her family from poverty back home, and Brooklynn letting go of the spotlight.

But none of these struggles ever posed as much of a threat to the group’s hard-fought bond as Kenji’s deep-seated desire to be part of his father’s life, even if it means destroying his relationship with Brooklynn and forever dismantling his friendship with Darius and the rest of the crew.

“When you start the series, you don't really like Kenji,” says Kreamer. “He’s kind of a jerk with the pink polo and popped collar, like an 80s teen movie bad guy who’s always flipping over the lunch trays. So to get into the depths of his character takes a while. I don't know if even Kenji always knows how he's feeling about things. And so the writers really dove in and, with the performance of Ryan Potter, gave Kenji even more dimension to what started out in the first episode as a bit two-dimensional. And now we've been able to broaden him out to a fully drawn character who's just trying to figure things out just like the other kids are.”

The campers may not be running for their lives from grossly genetically engineered predators, but the stakes of their survival are higher than ever this season, and all the emotional turmoil and personal introspection allowed the animation team at DreamWorks Animation to push even further the subtle facial animation the series has become known for. This was certainly the case with Kenji and Brooklyn – who struggled with every choice they made as they knew it would impact their trust with each other and their friends. But animated facial expressions were also heightened for the other campers who struggled with their own personal dilemmas, some realizing, for the first time, their feelings for each other.

“The acting on this show from the beginning, that Dan Godinez and his animation team and our animation studio CGCG Inc., have shown has been just phenomenal,” says Kreamer. “Speaking as someone from the writing side, when you can pull out dialogue and communicate something through a look or an expression, it's what animation should be. It's much better to show it than to say it.”

He adds, “You're not always afforded that opportunity. But we have been, on this show, because of the amazing work of the animation team. And as it's gone on, on a technical level, these animations, these models, they have different rigs and as the team and the studio gets more comfortable and more used to it, it's gotten better and better each season.”

Considering the foundation of the series is about dinosaurs running lose on an island, Jurassic Park, as a whole, was never really about the dinosaurs. At the heart of these stories was always human beings, their determination and will and the question of, “Should we? Or should we not?”

“The show has always been about these kids, and we had a lot more time to spend with these characters than you get in a two-hour movie,” says Kreamer. “So, we really wanted to dive into that part of it. And you really want to root for, as well as relate to, the kids and put yourself in their shoes. And so, yes, we have mercenaries and big game hunters and mad scientists, and there are some pretty extraordinary dinosaur battles that give this season a scope that feels epic. But we've also carved ourselves out this little corner and had the time to delve into stuff that maybe you don't get to do in the films.” And that little corner is about the challenge that comes with choosing one's own family, fighting the natural instincts and impulses these characters have relied on to stay alive and actually take the time to stop, think, and reflect on their decisions as people with, hopefully, a bright future ahead of them.

“The more personal you get, the more specific you get, in anything, and in writing and producing, that's where the good stuff is,” explains Kreamer. “When you can get that specific with characters that, thankfully, a lot of people have grown to love, that's where the juice is. What we've been doing since the beginning, is we just keep putting these kids into harder and harder situations and really tried to come up with ways where there isn't always a right or a wrong answer.”

He adds, “The more viewpoints you can show, the more internal struggles, that to me is the stuff that's really exciting with making something like this.”

It’s also what adds another layer to a series that, in the beginning, many wrote off as a kids-only series.

“But then we started killing folks off and everyone went, ‘Whoa, whoa! Isn't this a kid’s show?’” says Kreamer. “But the stakes had to be real. It's Jurassic. So, to be here and think about how far we've come and the swings that we've taken, it is surreal. And I’m just really grateful. This is an important franchise to me and to our crew too.” This fifth season will be the last for Camp Cretaceous, but Kreamer is leaving the door open for more possibilities.

“It’s sad to say goodbye,” he says. “But I'm excited about how things wrapped up for this final chapter. I hope other people feel the same. Because we're not just doing this for us. We're doing it for everyone out there. So, to everybody, thanks for taking this ride with us. And I hope you like where we ended up with. And who knows what the future holds? This is the end of one chapter, but we’ll see. There may be more chapters.”