Showrunner Scott Kreamer and DreamWorks Animation’s all-new interactive special – debuting today on Netflix - takes audiences back for a final adventure on Isla Nublar, where Darius and the rest of ‘The Nublar Six’ spend each day running for their lives, braving the elements while trying not to get eaten. 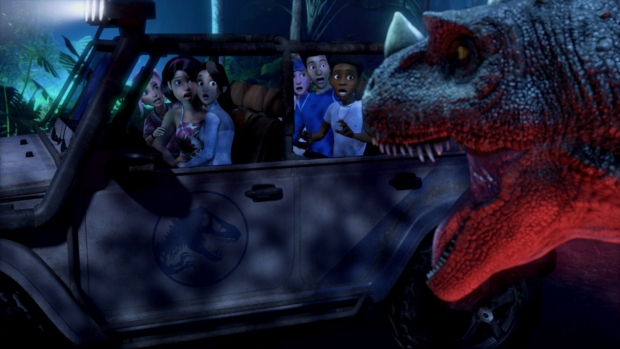 2015 dawned a new era in storytelling when Netflix began streaming interactive specials, episodes of favorite series that allow viewers to dictate character decisions and story events. The system operates like a this-or-that video game and has been used for series like Black Mirror, Captain Underpants, Carmen Sandiego, Spirit Riding Free and others.

Today, November 15, Jurassic World: Camp Cretaceous joins the catalogue of Netflix interactive specials with Jurassic World Camp Cretaceous: Hidden Adventure. The story, from Universal Animation Studios, DreamWorks Animation, and Amblin Entertainment, launches viewers back to Darius and the gang’s time on Isla Nublar, when running for their lives from dinosaurs was still the main event on their daily schedule.

In Hidden Adventure, Darius and the rest of The Nublar Six are running out of food after a storm ravages the island. When they discover clues to a hidden stockpile, the group braves old terrors and make new discoveries in never-before-seen parts of the island.

“This is a chance for kids to be transported to a different world where they're the hero, to put them in Darius' shoes, to have their decisions matter in the story, and be able to confer with the other members of The Nublar Six to find out what they think he ought to do,” says executive producer and showrunner Scott Kreamer. “It’s an extension of what we've tried to do from the beginning, but now we're letting the kids take the wheel.”

Viewers play the role of Darius in this interactive special, making decisions like choosing between escape routes, whether to run or stay put, continuing to follow clues to food or making a last-chance break for safety, even deciding to put dinosaur friends like Bumpy in mortal danger. It’s high stakes and Kreamer notes that interactive storytelling has come a long way in its ability to further immerse an audience in the fun and, sometimes, the peril. “When I was a kid, we just had ‘Choose Your Own Adventure’ books,” he remembers. “So, it'd be like, ‘Go right, turn to page 38. Go left, turn to page 17.’ This is a much more immersive way of doing that.”

One of the unique features of Hidden Adventure, as opposed to some other interactive TV specials, is that many of the earlier decisions follow a linear storyline. So, there are “wrong” choices and making these choices result in, well, being eaten.

“I feel like someone at DreamWorks told us ‘Okay, well, no one gets to get eaten,’ and then we went, ‘Yeah!’ but did it anyway,” Kreamer laughs. “But it’s just like we approached the show, where there was no gore. But, again, we're telling the story through our POV. So, you know, technically we didn't break the rules, because you don't actually see anyone get eaten. But we all remember Season 3. There's some scary stuff. And kids like being scared, it turns out.”

It also helps that immediately after getting eaten, viewers are brought to an empathetic Mr. DNA who states, rather obviously, “Well, that didn’t work out too well,” but then acts as a shepherd, guiding viewers through the right decision and, even when the timeline does start to branch off when there is no wrong decision, invites viewers to go back and “see what happens” if they make a different choice. And while some decisions mean the difference between life or death, and some dictate discovery and non-discovery of the park’s hidden mysteries, not all decisions are so intense. Some are about choosing between educational experiences or how to ease the tension among friends when tempers start to boil.

“We didn't want everything to be like, ‘Well, you chose wrong. Chomp!” explains Kreamer. “We wanted to mix it up. Some decisions seemingly just affect people's attitudes, some decisions pay off way later in the special, and some decisions, sadly, do lead to a ‘Chomp!’”

He adds, “We also wanted to have the ability to undercut those life-or-death moments with Mr. DNA, who we haven’t gotten to see since the show’s pilot, making a corny joke. And then you get right back into the action.”

Though the later portion of Hidden Adventure deviates from the otherwise relatively unbroken story path, Kreamer says he and the team initially had much bigger plans with the special, where almost every decision would lead to further and further varying the story.

“With Hidden Adventure now, we have about three episodes worth of content, but there was so much more I wanted to do,” says Kreamer. “There was originally a much longer version of the script, enough content for six episodes, where we started branching off right in the beginning. But we just didn't have the resources to do it. So, we contained it and then went about trying to make each of the choices have as much impact down the line as they possibly could.” Aside from mere scope, the Camp Cretaceous team also had the added challenge of working on the finale of their main series and Hidden Adventure at the same time.

“Writing [the special] while writing the series, using three different board teams, three different episodic directors, and not all the assets were ready at the same time… it was all over the place and we had to piece it together,” says Kreamer. “It's a huge undertaking while you’re still trying to land the plane on the series. It was a bear to do, and I don't recommend that to anyone. But luckily, our writers are so good that they did an amazing job on both. This crew constantly over-delivered.”

Of course, Kreamer still awaits feedback from his most notable critic: his son.

“Hopefully he digs it because he can be very critical,” says Kreamer, not joking. “When I started the show, he was six and he brought home this dinosaur book that he had gotten and sad, ‘You can use this on your new show.’ So that's when it was sweet. But now he’ll be like ‘Huh. You’re going to use the Brachiosaurus, there? Really? And I have to be like, ‘Why don’t you go clean your room?’” But, like everything he and the team have done with Camp Cretaceous over the last five season, Kreamer is excited for Hidden Adventure’s unique impact on franchise followers and getting to revisit Isla Nublar after two seasons away.

“We kicked it around in the writers' room and there was something really fun about the idea of going back to where we started, to go back to Jurassic World, to go back to our earlier character models and tell this sprawling survival story without any of the machinations or having a higher goal [than survival],” notes Kreamer.

Hidden Adventure is also the 50th episode of the Camp Cretaceous series and, in Kreamer’s opinion, the perfect way to wrap up the last two years.

“It's just a nice way to say goodbye, letting Darius take us through one more adventure,” says Kreamer. “And who doesn't like the occasional visit from a Mosasaurus?”