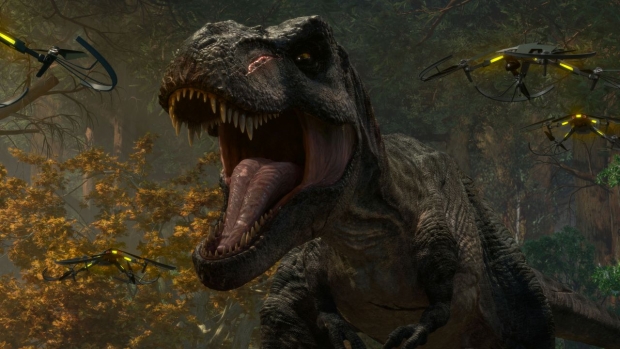 It’s time. The intrepid, resourceful crew of stranded campers is finally escaping Isla Nublar, heading home with spirits as high as the pterodactyl flies. Unfortunately, this new season won’t see any touching family reunions; we journey from the fire into the proverbial frying pan as the kids finally leave, only to find themselves shipwrecked on a new, mysterious island, never visited in either Jurassic Park or Jurassic World canon.

With that, the dino-driven adventures continue as an all-new Season 4 of DreamWorks Animation and Universal Pictures’ Jurassic World: Camp Cretaceous arrives, premiering on Netflix today, December 3.

“I say this all the time, but this show is all about these kids, and the horrible things we put them through, and how they've managed, through sheer force of will and heart and teamwork, to make it through these situations,” says Scott Kreamer, writer and executive producer on the Annie Award-winning CG animated series. “And we, again, wanted to amp it up more and throw them into a completely unknown environment.”

When Darius, Yas, Brooklynn, Kenji, and Sammy find themselves on an unfamiliar island, with a wrecked boat, no clue where they are, and with no one back home having any idea where they went, things seem even more bleak – if that’s even possible - than when they were being hunted left and right across Isla Nublar by genetically altered carnivores. On top that, the kids discover they are wildly unequipped for their latest predicament – environments ranging from blazing desserts to frigid, snowy wastelands - on this mysterious island.

“When we started the show, we knew that around this time we would want to get off the island, but we played with a lot of different ideas,” recalls Kreamer. “At one point we had talked about going to this tricked out oil rig community kind of thing. Then we considered going to Sorna, or one of the Five Deaths. In the end, we decided to just create our new island of mystery where these kids have no idea what’s going on.”

Of course, the island is still inhabited by dinosaurs, but instead of a sanctuary or theme park attraction, it’s a hub of experimentation, study, and... diabolical robots? Plus, there’s ample new locations that give the show a fresh look compared to previous Jurassic story settings. It’s the first time Camp Cretaceous has stepped this far off the franchise’s beaten path. “We didn’t want to do another tropical island because then we may as well have just stayed on Nublar,” Kreamer explains. “We've seen that, and we've done that. We wanted to do something new, narratively, as well as visually. So, now we’re thinking, where have we not seen dinosaurs before? Where can we have our kids and our audience guessing, ‘What the heck is going on here?’ and keep that momentum going.”

He continues, “You're building this new environment from the ground up. So that's super fun. It's also kind of daunting when you've got fans who are used to a certain type of area, a certain type of setting. I had more than a few sleepless nights over the BRADS robots. It is something new. And Jurassic World’s Colin [Trevorrow] and I even spoke about whether or not it was a step too far. And then, as we're writing it, we see some videos coming out of Boston Dynamics with what they're doing, which was definitely an inspiration for our robots. And it's like, ‘You know what, I think we’ve stepped just far enough.’”

Using robots - meant to assist in dino exploitation - as well as the previously unexplored environments was necessary to keep up the show’s momentum. Because after three seasons of these kids fighting stay alive on Nublar, then finally escaping, just to end up back in danger on a new island, they’re feeling the fatigue, as might empathetic fans who have spent more than a year watching the constant uphill battle.

“We’re now six, seven months into this story from Season 1, and now we're back in the blender,” Kreamer says. “These poor kids just want to go home and take a nap. And it's just not getting any easier. So, we wanted to portray that feeling. We wanted it to feel real and grounded, and not just ‘Oh, here we go for another adventure.’ We really have hung our hats on these characters. And we're rooting for them, despite all the awful things we do to them.”

This season is exceptionally heavy, with the character Yas dealing with the mental and emotional effects of PTSD -- suffering night terrors, unable to sleep, even shown unable to move in the face of a new dino predator. In one scene, Yas is shown standing still, crying and punching her leg to get it to move as a large dinosaur approaches.

But though heavy, such character arcs have given Camp Cretaceous’ storytelling and animation a chance to set the bar high for a kids’ animated series. “Those little details are some of my favorite acting moments in the entire season, if not the series, because it is this subtle acting that the team is able to achieve,” Kreamer shares. “Everything starts with the script. But then you see how the artists and the directors interpret what's in the script. And then what our animation team does with it… it’s a lot of smart, talented people who really care about these characters and honor what they would be feeling and going through.” Kreamer says the animation and writing teams on the series have always been incredibly detail-oriented when it comes to character development, whether it’s showing hair color grow-out, increased facial hair, wear and tear on clothes, or personality changes due to living for months in a harsh environment. And it’s another aspect of the show Kreamer and the Camp Cretaceous crew took to the next level in season four.

“It’s blown me away,” says Kreamer. “It starts with the artists, but what the animation team has done, and our animation studio CGCG Inc., I've never seen such subtle face acting like I've seen in this show. And I know writers, like myself, are supposed to just fill everything with words. But man, if you can communicate something without dialogue, with just a look, like our team has done, it elevates the whole thing. It makes it feel less like ‘Oh, there's another kids’ cartoon,’ to something more than that. I'm proud of the team for what they've been able to achieve.”

He continues, “But the balance is, ‘How far down that road do you go?’ if it is a kid show, and we don't want to go too far.”

Kreamer says that the show has been “an incredible balancing act of fun and heart and adventure, but keeping the stakes real, and keeping things grounded.” From the beginning, the series’ writers and animators have had to be careful how far they choose to push the “real and grounded” parts of the show, depicting trauma and emotional breaking points.

Luckily, this season also includes a very endearing romance between two of the campers that offers a much-welcomed relief from the season’s otherwise weighty themes. “There were times when we were coming up with these grim situations in the writers’ room, and then I would come in and write ‘Fun’ on the whiteboard,” says Kreamer. “You have to keep it in mind. All the way down the line, the team really stepped up and came up with a season that I think is super entertaining.”

And when it comes to what excites the producer most on the new season, he offers the same answer as he did when the series first premiered in 2020. “To be a broken record, I’m excited to see where these kids are going,” Kreamer says. “There's a lot packed into this one. And you just hope that everyone's still going to go on the ride with you.”