The director talks about Pre-Columbian art, character design and the 14 years it took to produce his beautiful and thoughtful homage to indigenous Andean cultures steeped in harmony with the Earth. 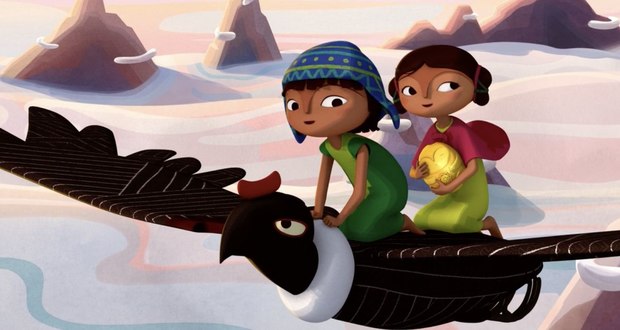 14 years in the making, Pachamama, Juan Antin’s animated tale about a 10-year old Andean boy’s journey to reclaim his village’s irreplaceable treasure, premieres today on Netflix. Set during the time of the Spanish Conquistadors and their South American incursions, the Cesar Award-nominated film is Antin’s homage to the indigenous cultures of the Andes, and takes its name for the concept of “Pachamama,” both an earth mother goddess figure as well as a more general concept of living in harmony with the Earth, akin to the idea of “Mother Nature.”

Pachamama tells the story of Tepulpaï, a rather mischievous young boy who lives in a remote Andes village and dreams of one day becoming a shaman. The villagers’ ceremony making offerings to Pachamama is disrupted by an Incan overlord, who confiscates their sacred golden statue. Accompanied, to his annoyance, by a friend, Naira, and her pet llama, Tepulpaï seizes on the chance to prove himself by embarking on a dangerous journey to recapture the village’s treasure.

“If you travel in South America to Argentina, Bolivia or Peru, you see that this culture, this idea of ‘Pachamama’ is very much alive,” Antin shares. “For me, it was amazing to discover. People believe that the Earth is part of us, that we are related, that we share a respect, love and gratitude for the Earth. I thought this is amazing because, today, we are living at a moment in history where solutions to problems seem to be going wrong. The planet is dying, and I said, ‘This idea is a great thing for our planet.’ I thought about making this film for children as well as for adults.”

The film is produced by Academy Award nominee Didier Brunner, an animation production veteran who has provided a deft guiding hand on some of the most memorable and thought-provoking independent animated projects of the last two decades, including Ernest and Celestine, Kirikou and the Sorceress, The Triplets of Belleville and The Secret of Kells.

But it took a bit of time, actually, many years, for the two to come together and make the film. “The film I started making years ago was much different than the film I ended up making,” Antin explains. “At first, I planned to make the film using stop-motion. So, I found a French co-producer and moved to France to make the film. We had great studios in France, Canada and Luxembourg lined up. I even made a stop-motion trailer. The thing is, the look was a little too artsy, a little too homemade, which made it very difficult to get funding. The project didn’t continue.”

For Antin, the quest for funding continued for many years. “Many producers were scared of the film because it was a very different project than they were used to,” he reveals. “I even looked for funding in Spain, until I finally understood that the Spaniards really didn’t want to fund a project where they were the bad guys. Though it’s not a huge amount of money – 7 million euros – that’s a lot of money for an independent animated film. So, ultimately, it took almost five years to find the funding.” Things began to happen once Antin joined forces with Brunner. “Everything got very fluent in 2014 finally when Didier Brunner jumped in as a producer. From that point, it took about three years to produce the film. So, all told, it took me two years of research and writing, two more years in development, five years to find funding and three years to produce. Plus the stop-motion work. 14 years in all.”

Pachamama is a vibrant film, beautifully designed and animated using 3D character animation textured with unique, hand-drawn 2D designs set against watercolor-style hand-drawn 2D backgrounds. The bold use of color accentuates the distinctive visual style, which draws inspiration from Antin’s fascination with and extensive study of Andean culture. An Argentinian native, Antin traveled with his wife, an anthropologist doing social work with indigenous people in the northern part of the country. “I journeyed all over the north of Argentina, Bolivia and Peru. I fell in love with the culture of the Andes and Incas. It is so cool. So many people think of these ideas as history, things of the past. But this culture is very much alive today.”

For Pachamama, Antin drew upon various aspects of Andean and Incan history, including art and architecture, for his designs. He spent considerable time studying and doing research at museums and various remote South American locations. “I looked at a lot of Pre-Columbian art, pottery, fabric and textiles, mostly at museums and through my journeys,” Antin notes. “For all our character designs, we used a lot of Pre-Columbian vases and pottery. Pre-Columbian art is full of patterns, mostly geometrical forms that are beautiful and very powerful. The Incan ceramics all have people as characters with these amazing faces. I said, ‘Wow, this is animation! We have to animate this.’”

“This also influenced our use of textures,” he continues. “We scanned watercolor paintings and used them as textures to map over the characters to give that earthy, grainy look. I was looking for a very organic feel. That's why I first wanted to make the film in stop-motion. But, in the end, we used 3D and it worked well. The 2D backgrounds were hand-painted directly into the computer using tablets, in the style of watercolor paintings. All our special effects like water, fire and smoke are done with hand-drawn 2D textures based on indigenous art designs. We tried to use all these powerful patterns, symbols and forms for all our designs. We want our audience to see a different world, the world that those people saw.”

The Incans in the film are designed quite differently from the indigenous Andean villagers, based, according to Antin, on the distinctive architecture of the region. “We had to make the Incans slightly different for the audience to understand that they were a different people,” he says. “The Incans were citizens of a city within a very organized empire far from the village. We came up with the idea of making them more based on the architecture. So, the Incans are more square. For example, their heads are square like temples, or walls of structures. The villagers had rounder eyes and legs, more representative of the Earth. The Incans are more like the buildings in the city.” A third design style was used for the conquistadors, drawing from European Renaissance and Baroque art styles. “The art, in many aspects, drives the film’s drama, because we had to understand the Incans are different people than the arriving conquistadors,” Antin states. “For the Spaniards, we used a more realistic representation like in the paintings you’d find at that time in Europe. In Pachamama, I tried to mix these different artistic currencies as well as music, so that every character is represented graphically.”

Made through a co-production of studios in Canada, France and Luxembourg, Pachamama took three years to produce. Aside from securing funding, Antin’s biggest challenge was managing the workflow and studio time zones. “Our production pipeline was very complicated because we had to manage the work of studios in three different countries,” he concedes. “The 3D animation was done in Montreal. The hand-painted backgrounds were done in Luxembourg, while the background drawings were done at a studio in France. Our headquarters was at another location in France. Sometimes, we’d get shots to check from Montreal and we had already gone home to sleep. Questions needed to be answered. We were like, ‘Unnggghhh…’  But in the end, it worked fine.”

Antin also shares that the 120 or so people who worked on the film all pulled together, which was critical to the film’s successful completion. “This film resonated with everybody that worked on it,” he notes. “They gave it their all. Everybody was really, really engaged, and that's what made things work, even with all the production complications.”

And today, with Netflix’s release of the film in over 180 countries, Antin’s vision for a film celebrating the people and culture of the Andes Mountains will be seen by audiences around the world. “It's very exciting to have Netflix bring Pachamama to so many people,” he exclaims. “This film is sincere. It’s authentic and it speaks to people. I hope it touches them like it has touched me. It's amazing to think that on the same day, people in 183 countries will have Pachamama on their screens at the same time. That’s pretty awesome!” WetaFX Delivers a Monstrous 3rd Act for ‘Shang-Chi and the Legend of the Ten Rings’
‘The Spine of Night’: Redefining Fantasy and Animated Filmmaking
Luma Pictures is Well Suited to ‘Eternals’ VFX Production
‘The Musician’: Celebrating Human Resilience with Cutout Animation
Plague Diversions: Gazing at the Shortlist for the Best Animated Short Oscar
Producing Animation the Right Way on ‘Ron’s Gone Wrong’
‘Sing 2’: Getting Ready for the Big Time
END_OF_DOCUMENT_TOKEN_TO_BE_REPLACED